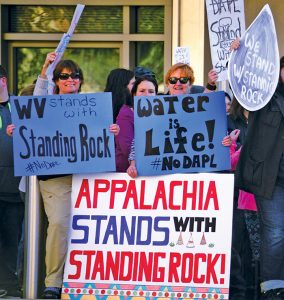 More than 200 people opposed to the pipeline rallied outside an Army Corps office in Huntington, W.Va. Photos by Chad Cordell

UPDATE: On Dec. 4, the Department of the Army announced it would not grant an easement for the Dakota Access Pipeline to cross Lake Oahe, and instead would look at alternatives and conduct an Environmental Impact Statement. In a statement thanking the Obama Administration and supporters, Standing Rock Sioux Tribal Chairman Dave Archambault said, “When it comes to infrastructure development in Indian Country and with respect to treaty lands, we must strive to work together to reach decisions that reflect the multifaceted considerations of tribes.”

Energy Transfer Partners and Sunoco Logistics Partners, the companies behind DAPL responded by saying they remain “fully committed to ensuring that this vital project is brought to completion and fully expect to complete construction of the pipeline without any additional rerouting in and around Lake Oahe. Nothing this Administration has done today changes that in any way.”

After the Army announcement, the Standing Rock Tribe asked supporters to return home until the winter weather clears. Some water protectors are remaining at the Camp of the Sacred Stones on private land, but have suspended the open invitation to supporters due to limited infrastructure.

Across Appalachia, communities are supporting the indigenous-led resistance to the Dakota Access Pipeline, a partially constructed crude oil pipeline stretching 1,100 miles across North and South Dakota, Iowa and Illinois.

While an earlier alternate route for the project was rejected due to concerns that it would jeopardize the water supply for the city of Bismarck, N.D., the route currently under construction is planned to go under the Missouri River along the eastern edge of the Standing Rock Sioux Reservation, threatening to impact Lake Oahe, a vital source of drinking water for the tribe, and 8 million people living downstream. Additionally, DAPL construction has destroyed numerous sites sacred to the Sioux people, and portions of the pipeline route are on Sioux land that was never ceded to the United States.

For months, the Standing Rock Sioux Tribe’s request that pipeline construction be stopped went unheeded by U.S. Army Corps of Engineers, the primary government agency responsible for permitting the project.

During this time, tribal citizens, along with allies from over 200 indigenous nations — the largest gathering of indigenous peoples in over a century — as well as non-native supporters, set up encampments along the pipeline’s route. Referring to themselves as water protectors, these citizens are engaging in prayerful, non-violent direct action to protect their water and sacred sites from damage caused by Energy Transfer Partners, the company building DAPL. These actions have been met with tear gas, attack dogs, water cannons, rubber bullets and other projectiles from law enforcement and private security contractors.

On Nov. 14, the Army Corps of Engineers announced it would delay further construction of the pipeline until after consulting with representatives of the Standing Rock Sioux Tribe, a move indigenous organizers have largely dismissed as an empty gesture. In response, Energy Transfer Partners sued the Army Corps, asserting that the project had already complied with all regulatory processes. 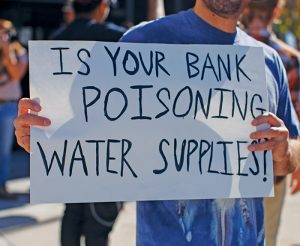 A demonstrator holds a sign during a Knoxville, Tenn., event that focused on the banks funding DAPL. Photo by Lou Murrey

Activists on the ground report that despite the Army Corps’ announcement, work continues on the pipeline, as do attacks on water protectors by militarized police and security personnel.

In Appalachia, communities are organizing to provide material support and their physical presence on the front line, as well as to execute solidarity actions in the region.

“I live in Ellett Valley on the North Fork of the Roanoke River, which is threatened by the Mountain Valley Pipeline,” Erin McKelvy says during a phone interview conducted while she and three others traveled from Virginia to Standing Rock. “We are showing up flexible to do whatever needs to be done. In an earlier trip we helped set up a wellness center and medical infrastructure to support the encampment.”

Thousands of people continue to flock to the frontlines answering a call to action issued by indigenous organizers. But according to North Carolina-based activist-medic Noah Morris, would-be supporters who show up unprepared and aloof to the importance of indigenous leadership can become a burden.

“There is a call for action targeting banks like Wells Fargo, Suntrust and many others that are invested in this pipeline,” says Morris. “I’d encourage folks who don’t have specific skills to offer on the front lines to focus on doing something locally to support the struggle instead.”

On Nov. 4, 80 people marched through downtown Knoxville, Tenn., delivering letters to representatives of Suntrust and Citibank, two banks that provide funding to Energy Transfer Partners, asking that these institutions sever all financial ties to DAPL. This was followed by at least a dozen solidarity actions across the Appalachian region on Nov. 15.

“The protest against the Dakota Access Pipeline at Standing Rock is an historical event. On face value it’s the fight to keep our water clean and sacred sites protected, but it’s also becoming a turning point, globally, for people to recognize the value of Indigenous lives and living in balance on Mother Earth,” says Crystal Willcuts-Cole, a member of the Cheyenne River Sioux Tribe who lives in Big Stone Gap, Virginia. 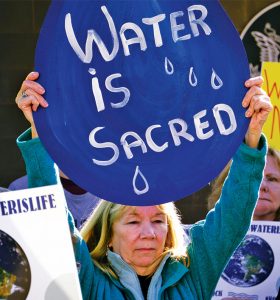 A woman holds a sign during a the demonstration against the Dakota Access Pipeline in Huntington, W.Va. Photo by Chad Cordell

McKelvy and Morris stress that non-native allies should educate themselves about indigenous resistance to colonization, and heed the voices of indigenous organizers. “We’re not just fighting a pipeline. We’re fighting 500 years of settler-colonialism,” says McKelvy. “Support for native-led struggles, and support for non-native people-of-color-led struggles … it’s just what time it is.”

On Nov. 28, the governor of North Dakota ordered the evacuation of a camp on land that indigenous leaders say is sovereign territory of the Great Sioux Nation and was never ceded to the United States, although it is currently claimed by the Army Corps. Two other camp sites are not being evicted. As of press time, as many as 2,000 United States veterans planned to gather in North Dakota to serve as “human shields” for the activists, according to The New York Times.

To find out how to get involved with Standing Rock solidarity efforts in your community, contact actions@noDAPLsolidarity.org.

Thoughts from Crystal Willcuts-Cole
Crystal Willcuts-Cole is a member of the Cheyenne River Sioux Tribe who lives in Big Stone Gap, Va. She and two of her children held a demonstration in support of the Standing Rock water protectors in front of the Norton Virginia branch of Wells Fargo, a bank with financial ties to Energy Transfer Partners on November 15th. This caught the attention of community members who joined Willcuts-Cole for another demonstration on December 5th. Willcuts-Cole shared some of her thoughts with The Appalachian Voice.

“The protest against the Dakota Access Pipeline at Standing Rock is an historical event. On face value it’s the fight to keep our water clean and sacred sites protected, but it’s also becoming a turning point, globally, for people to recognize the value of Indigenous lives and living in balance on Mother Earth. People are waking up to the harsh realities of climate change. To many, Earth has only been a resource, something we can use for our own benefit, something that will make us rich. But Earth is telling us everyday, if we want life for our children and live in a balanced way, we have to change how we care for Mother Earth and each other.

If you are a non-Native and want to be an ally at Standing Rock or in general, it has to first start with a willingness to see things from a Native perspective. A change in values from those of capitalism, egoism, and power to humility, perseverance, respect, honor, love, sacrifice, truth, compassion, bravery, fortitude, generosity, and wisdom is fundamental. Next, learn about the issues the Indigenous face by listening with an open heart, knowing that history books never told our side of the story and mainstream media does the same today. Lastly, bring your skills to whatever cause you feel led to. We need everyone’s support in whatever capacity they are willing to assist, whether its being present at Standing Rock, supporting those who are there, or fighting for a cause closer to home. It’s imperative to always listen to the Native elders and follow their lead. Although no matter what, please always pray for us.

I am Lakota from the Cheyenne River Sioux Tribe in South Dakota. I am an artist and freelance writer and I also have land at Standing Rock so this is a very personal issue to me. My husband and I moved to Big Stone Gap in 2008 to work at USP Lee County. We have a son and two daughters.”