“We’re at an age where we need to start looking at alternative energy,” says Olivia Haney, a member of the BARC Electric Cooperative since 1989.

The BARC electric co-op in Virginia and the Appalachian Electric Cooperative in Tennessee have both launched community solar projects to help members save money while reducing carbon emissions. 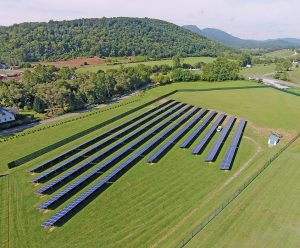 Mike Keyser, the CEO and general manager at BARC, explains that there was a lot of interest in solar by members of the cooperative, but there was no real increase in the installation of solar panels on individual houses. Keyser adds that certain aspects were preventing people from investing in renewables, including physical barriers such as shading and positioning of the house, along with financial barriers including upfront costs and commitments.

The new solar project provides up to one-fourth of the total energy needs of each of the 220 households that have a membership in the cooperative.

Not only does this option allow any member to invest in solar, it also prevents the possibility of future rate increases through a 20-year fixed rate at only a dollar more per month than what standard customers are paying.

BARC sells its solar energy in “blocks,” which are made up of 50 kilowatt hours each.

“We rolled the subscriptions into something called ‘solar energy blocks,’” Keyser explains. “If it’s an average customer, 25 percent of their consumption would be five blocks, which is an easy thing for people to wrap their mind around.”

Community members who live in the five rural counties in Virginia that BARC covers can apply to be a part of the program, including all of Bath County and parts of Highland, Alleghany, Augusta and Rockbridge counties. BARC member Haney joined the community solar program after learning about the environmental benefits of renewable energy.

When it comes to the growth of the project, Keyser is optimistic about the possibilities.

“We have room on the site to triple the size. It’s 550 kilowatts, and we can go up to about a megawatt and a half, so we are hoping to expand in another year or so,” says Keyser. “Once we feel like we’ve given the option to every member that wants an opportunity, then we would increase the percentage.”

According to Keyser, most subscribers in the solar project have shown interest in increasing the percentage of their electricity covered by solar.

Appalachian Electric Cooperative, an electricity provider based in New Market, Tenn., is also starting a community solar program. According to Mitch Cain, the co-op’s director of member services, the solar array will be operational after Dec. 12 and consists of 9,471 panels at 145 watts each. Any residential or commercial member of Appalachian Electric, which covers Grainger, Hamblen, Jefferson and Sevier counties in Tennessee, can take part in this new initiative.

United States businesses have installed enough solar energy to offset almost 890,000 metric tons of carbon dioxide each year, according to the Solar Energy Industries Association. Solar panels convert energy from the sun into electricity that can be used in place of other non-renewable sources such as coal and natural gas.