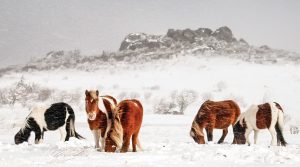 Ponies were introduced to the Grayson Highlands and Mount Rogers area of Southwest Virginia in the 1970s. Since then, they have become a popular attraction. This image was also a Flora and Fauna Finalist in the 11th Annual Appalachian Mountain Photography Competition. Photo by Sharon Canter 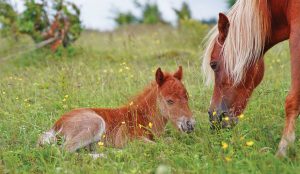 This mare and her foal were grazing at Massie Gap in Grayson Highlands. Photo by Martin Seelig of Catchlight Gallery

After just a few miles of walking through Grayson Highlands State Park, hikers can meet herds of wild ponies who are generally unconcerned by human presence. The rhododendron along the lower-elevation trails soon clears, giving way to the open grassy balds that characterize the Grayson Highlands and Mount Rogers National Recreation Area. The balds reveal stunning views of the Southwest Virginia mountains, and upon a closer look, hikers can spot more white and brown ponies grazing between the rock outcroppings on nearby ridges.

“I would bet that 50 percent of the people that come there, come for the ponies,” says Elizabeth Wegmann, a landscaper and animal photographer who hikes the area several times a month, learning the ways of the estimated 100 ponies that call these mountains home.

“[The Grayson highlands ponies] have 1,500 acres of contained area that they can roam in the state park,” says Teresa Tibbs, the office manager at Grayson Highlands State Park. In the neighboring national recreation area, the ponies are also contained in a fenced area of over 3,500 acres, according to Rebecca Robbins with the George Washington and Jefferson National Forests.

The ponies maintain the mountain balds by eating grasses and small shrubs.These open grasslands are not natural, but were cleared and used as farmland before the area became park lands. The ponies have not caused overgrazing issues, in Wegmann’s opinion, and in 2012, longhorn cattle were also added to the Mount Rogers area to help graze the balds during the warmer months.

The cattle are removed in the winter while the ponies stay and forage for food through the snow. Wegmann has observed that winter weather decreases the herds’ activity because they stay near various water sources, but harsh winters can force the ponies to spread out from their herds in search of food. 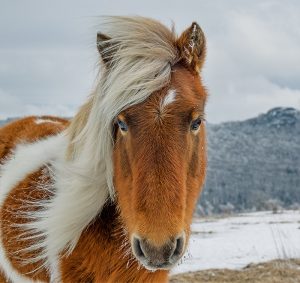 The ponies at Mount Rogers and Grayson Highlands graze the area despite the winter snow. Photo by Michael Speed

Signs in the park urge visitors not to feed the ponies, but Tibbs says the park has issues “continuously.” Dependence on handouts of human food can cause serious health and behavioral problems for the ponies.

Ponies lack the ability to vomit, so human food can also cause health issues such as choking. Also, too much sugar can cause a disease known as laminitis, which causes the ponies to have sore and sometimes diseased hooves. When bad enough, the pain can severely debilitate the ponies. Without the ability to walk, the ponies will starve to death.

Despite this danger, the wild ponies have grown accustomed to being fed by hikers, and will approach visitors without fear.

“When you hand-feed a wild animal, you create a pattern that exists long after you leave,” says Wegmann. “You’re doing a disservice to the animal, and anyone that comes after you, by making them a beggar and a nuisance.”

According to Tibbs, eating human food can make the ponies seem aggressive “because they know that people are going to feed them something, and that causes problems.”

“They are wild ponies,” Tibbs says, “and they do bite.”

Before the Grayson Highlands became a state park in 1965, the mountains were covered in farmland grazed by cattle and a few ponies. In 1974, Bill Pugh and another pony owner brought 20 ponies to the park to maintain the grassy balds that were no longer being grazed. 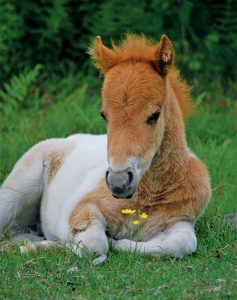 Some foals on the Grayson Highlands are rounded up every fall and offered for auction in order to maintain a healthy herd size. Photo by Elizabeth Wegmann

According to Tibbs, the ponies “were introduced as a resource management initiative.”

In 1975, the Wilburn Ridge Pony Association was formed as a nonprofit organization to purchase the free-roaming ponies from Pugh.

Although none of the original ponies are alive, the Wilburn Ridge Pony Association still maintains ownership of the mostly wild herds. Throughout the year, members ride horses through the park to check on the ponies and set out salt and worming blocks. Salt blocks give necessary minerals, while the worming blocks prevent worms that can cause intestinal issues.

The association also holds a round-up every fall to check the health of the herds and to separate the foals for auction.

Rounding up male foals is part of the association’s agreement with the national forest and state park to keep a healthy number of ponies in the herds. As the males grow into stallions they split away from their mothers, creating more herds, but of smaller sizes which aren’t as safe. The association’s members create round-up corrals with a V-shaped fence that allows the ponies to enter, but not escape. Similar to a lobster trap, this method allows the association to humanely separate the foals from the herd without hurting them. 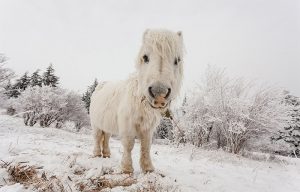 A pony chews on foraged grass on a snowy day. Photo by Michael Speed

Both male and female foals that have been rounded up are then sold at auction to individual owners, ranging in price from $35 to nearly $1,000. Foals from the park’s celebrity stallion, “Fabio,” are often the most desired for their long blonde manes.

The ponies of Grayson Highlands and the Mount Rogers National Recreation Area not only provide a necessary resource to maintain the open mountain balds, but also draw tourism to the park.

Although the ponies live wild on mountains with limited assistance from the Wildburn Ridge Pony Association, they have grown unafraid of human hikers. Their curious personalities give visitors a unique experience as they enjoy the immense views of the Blue Ridge Mountains. 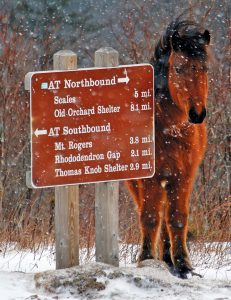 Trail signs — and a pony — at Grayson Highlands. Photo by Elizabeth Wegmann

In search of the ponies

To plan a trip to the Grayson Highlands, Wegmann suggests a good map such as the National Geographic maps that can be purchased at the park’s ranger station.

For the best chance of finding the wild ponies, Wegmann recommends starting south on the Appalachian Trail towards Mount Rogers. The ridge offers a wide view to spot ponies. For more specific directions, contact Wegmann on Facebook @graysonhighlandsponies, or call the Grayson Highlands State Park office at (276) 579-7092.