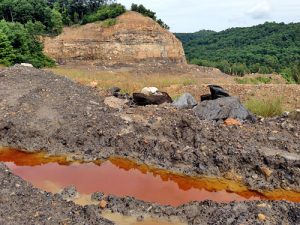 Acid mine drainage collects at the KD #2 mine site shortly after the state halted work at the mine. A recent inspection recorded pH values between 3 and 4, which is 100 to 1,000 times more acidic than allowed by law. Photo courtesy the Kanawha Forest Coalition

Seven miles south of Charleston, W.Va., sits a 9,300-acre expanse of trails, streams and wildlife known as the Kanawha State Forest. The forest’s diverse wildflower and bird species attract naturalists from all over the region, and trails and fully-equipped campgrounds bring in a variety of visitors, from mountain bikers and campers to students on field trips.

When Keystone Industries applied to open a 413-acre mountaintop removal coal mine adjacent to the forest in spring 2014, concern for the land’s recreational and ecological diversity prompted outrage from West Virginians. During the mine’s permitting process, the West Virginia Department of Natural Resources received 180 comments from the general public. Every single one of them opposed the mine.

The state’s Department of Environmental Protection acknowledged some of these concerns when reviewing Keystone’s permit for the KD #2 mine. According to a statement from the DEP, the agency included provisions in the permit that would have minimized the mine’s impact on tourism and water quality. These provisions required that a ridge facing the forest be mined last, that the buffer between the mining and the forest would be increased, and that blasting would be prohibited during times of heavy forest usage, such as holidays and weekends.

But many residents in the area still had questions. Daile Boulis lives roughly 2,000 feet from the mine in the small community of Loudendale, five miles south of the state’s capital, Charleston. Her house faces the state forest, and she relies on well water. During the January 2014 Charleston water crisis, when a chemical spill contaminated Elk River and the city water supply, residents of the city came to her house to shower and fill jugs with fresh water.

Boulis first heard about the Keystone mine through a local news affiliate’s coverage of the permit on Facebook. “This thing pops up on my newsfeed with a map of the mine,” she says. “I’m looking at the map and I’m thinking, wait a minute, I think that’s my house right there!”

Many of Boulis’ and her neighbor’s anxieties about the mine centered on water quality and flooding. In 2003 the community of Loudendale experienced a horrific flood. Houses were lost; one person was killed. Because of the increased risks of flooding associated with mountaintop removal, and because Loudendale is located in a narrow valley that is already prone to flooding, the trauma of this experience resurfaced when the KD #2 permit was approved. “We were so concerned about water that we had to remind [our neighbors] that we were [also] going to have to worry about air quality.”

Since the DEP approved the permit in May 2014, the mine has accumulated more than 20 violations — many of them water-related — as well as three cessation-of-work orders. Many of these violations are water quality issues that are not easily mitigated, such as the orange-tinted acid drainage that runs off of many mine sites in the Appalachian coalfields. Despite the DEP’s attempts to create a buffer between the KD #2 mine and the forest’s watershed, acid mine runoff from the mine is now contaminating the nearby Davis Creek watershed.

“This [was] the tightest, best-written permit in the state of West Virginia — which for me, that single sentence is probably the scariest description [of the KD #2 mine],” says Boulis, referring to the fact that the state’s heightened scrutiny still could not prevent the amount of subsequent violations.

Jim Waggy and his colleagues at the grassroots Kanawha Forest Coalition were fully aware of the danger to the forest’s watershed when the permit was issued. At a WVDEP Surface Mine Board hearing in August 2014, Waggy and Doug Wood, a retired DEP water quality specialist, testified to the company’s prior history, as well as the potential water quality issues at the site. “[The agency’s] response was, ‘well we can’t just say there might be acid mine drainage problems,’” Waggy says.

In light of the 20-plus violations that the company has amassed since the mine opened, Waggy is dismayed by the agency’s dismissive attitude. “You would think that with this being such a controversial permit and with so much attention focused on it that the companies would have been so careful to follow the rules and to engage in the best practices possible,” Waggy says. “But apparently the companies are just so accustomed to bending or ignoring the rules — and getting away with it — that that’s how they behaved on this site as well.”

In June 2015, the amount of violations, in addition to political pressure and water monitoring efforts from citizens, finally forced the state’s hand. The DEP halted work at the mine, and placed Keystone and its operator, Revelation Energy, on the federal Office of Surface Mining’s Applicant Violator System. Inclusion in this nationwide database forbids them from holding another mining permit in the nation until the WVDEP approves their plans to mitigate the environmental problems on the site. This does not necessarily mean that Keystone could lose its KD #2 permit — but there is always that possibility.

Revoking Keystone’s permit would not repair the environmental damages that have already occurred. In fact, the evidence seems to indicate that a great deal of the damage is permanent. As Waggy noted in a Charleston Gazette editorial, “The citizens of West Virginia will have to choose between accepting a biologically degraded watershed or paying the formidable costs of perpetual water treatment.”

But despite the scrutiny the DEP has given to this mine, when asked if the more rigorous KD #2 permit process would have an effect on how the agency issues future mining permits in the state, a DEP spokesperson responded, “While the agency is always looking to improve how it operates, there is nothing about this particular situation that would warrant an immediate change in procedures.”

For residents in the more rural and economically distressed areas of the state, the lack of legal resources, time and political capital to hold the DEP and the companies it permits accountable continues to be a problem. Because the KD #2 mine is not far from relatively affluent neighborhoods in the greater Charleston area, Waggy says, “There is a very strong feeling that if other [mountaintop removal] sites in West Virginia were given the same level of attention and scrutiny, a large majority — if not all of them — would reveal the same degree of acid drainage and environmental impact.”

Yet Daile Boulis remains determined to fight back against what she perceives as the coal industry’s indifference to West Virginia’s communities. “I don’t deserve to be treated like a cost of business,” she says. “In fact I refuse to be treated as a cost of doing business.”