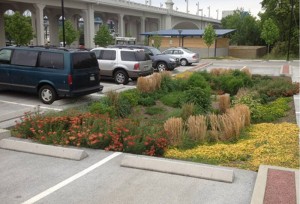 This Renaissance Park Bioretention area in Chattanooga, Tenn., collects water from the parking lot and allows it to infiltrate into the ground. Photo courtesy of the city of Chattanooga

On average, Chattanooga, Tenn., receives 53 inches of rainfall per year. Combined with the city’s steady growth and development in recent times, the rainfall began to overwhelm old drainage systems, causing flooding and erosion in the city. This stormwater washed into the Tennessee River, pollutants in tow. In 2010, the U.S. Environmental Protection Agency and the Tennessee Clean Water Network sued the city for violations of the Clean Water Act. Under the resulting settlement, the city agreed to pay an estimated $250 million to minimize or eliminate sewage overflows and improve their sewer system.

Stormwater runoff in Appalachia can be attributed to several factors. One major issue is the spread of development into natural areas that trap rainwater and allow it to slowly seep into the earth. The replacement of permeable soil with roads, buildings and parking lots causes issues with erosion and flooding. The U.S. Forest Service predicts that central Appalachian summer droughts will be accompanied by increased flooding in the spring and winter.

Since the EPA expanded the Clean Water Act in 1987 to include a program for stormwater runoff, many communities across the country have been required to implement plans to manage the problem. The use of green infrastructure — the replication of natural areas with plants and other organic materials as a means of trapping and filtering stormwater — has been encouraged by the agency since 2007.

Mounir Minkara, the water quality manager for Chattanooga, predicts that the plan will have many long-term benefits for the city.

“[We were] looking at a roadway project here that would have cost a lot of money to actually fix a drainage issue on the streets or on the neighborhood that floods a lot,” Minkara says. “Now we’re looking to address it through green infrastructure. We feel like the cost may be half of what it had been if we do it through [the storm drain system].”

Jay Squires, the streets and stormwater manager for the City of Spartanburg, S.C., is also looking at the long-term benefits of stormwater management. A 2013 project sponsored by the EPA, the Northside Project, will incorporate green infrastructure such as rain gardens, permeable pavers, open green spaces, and green rooftops. Squires also hopes to restore a stream as an amenity for the Northside neighborhood. In addition to helping with water quality, Squires believes that the green infrastructure will solve drainage issues in Northside, and help increase property values. He and his team are obtaining permits to begin implementation.

“It’s an important project, but it’s a long-range project that we need to always be on the tip of our tongue and not something that we stick in the background,” Squires says.

In mid-July, the EPA recognized the Eastern Band of Cherokee Indians in western North Carolina for their Native Plant Nursery Facility, which provides plants for projects to restore streams and habitat on tribal lands. The community uses two 6,000-gallon cisterns to collect and store rainfall to water their plants, which reduced their water withdrawls from an on-site stream by 36 percent during the first year.

At the University of Kentucky, a rain garden is aiding education. The rain garden, located near the headwaters of the Wolf Run Watershed in Fayette County, was funded through a stormwater incentive grant from Lexington, Ky., and the university’s student sustainability council.

“It’s functioning as a living-learning lab,” says Rebecca McCulley, interim director of Tracy Farmer Institute for Sustainability and the Environment and associate professor of Plant and Soil Sciences. “We have students and faculty that are actually out there pretty regularly collecting data.” 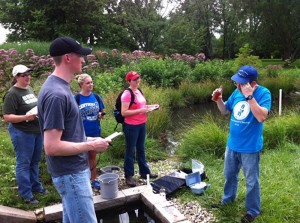 To prevent the university’s stormwater runoff from polluting nearby water bodies such as streams and ponds, school officials are required to obtain a National Pollutant Discharge Elimination System permit and develop a stormwater management program that includes public education. Suzette Walling, administrative support for the Tracy Farmer Institute for Sustainability and the Environment at the University of Kentucky, says that student involvement in the rain garden contributes to that outreach.

“Being a community partner is certainly important,” Walling says.

There are many schools that have implemented creative stormwater management solutions in the Appalachian region, including Appalachian State University in Boone, N.C., ranked number 22 in the nation among the Sierra Club’s green schools of 2014. Among the projects the school implemented are a rainwater retention cistern that captures runoff and releases it into the watershed by way of a low dam that regulates the waterflow to prevent flooding, and a broadcasting center that collects stormwater and uses it as non-potable water in the restrooms.

“We feel like this has been the right approach,” Minkara says of Chattanooga’s sustainable stormwater management program. “We anticipate that property value will improve and it will have better benefits for the environment for sure.”