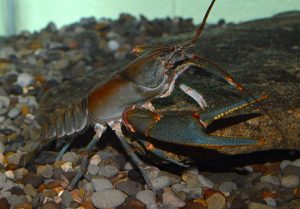 The Big Sandy crayfish, which is currently considered endangered by Virginia officials, may also be listed as federally endangered. Photo by Zachary Loughman, West Liberty University

There are more than 300 different species of crayfish in the southeastern United States alone. The adaptable freshwater crustaceans look like small lobsters, and they live in all sorts of environments, from low-lying swamps to high mountain streams.

Those who never grew up catching crayfish in mountain streams are probably most familiar with the abundant Red Swamp and White River varieties, which are sold commercially. They can be found burrowed in the mud in the brackish marshes of Louisiana and along murky waterways throughout the deep South.

The crayfish that live in coldwater creeks are generally smaller than their Cajun cousins, and hide from predators in the crevices of the creek bottom. Crawdads, as they are also known, spend a majority of their lives wedged into these nooks and crannies, which also serve as places to lie dormant during the winter months. But when these rocky creek beds are smothered in sediment, the habitat that these creatures depend on to survive is lost.

The effects of sedimentation on Appalachian crayfish populations is evident in the Big Sandy and Guyandotte River drainages of West Virginia. A recent report issued by the U.S. Fish and Wildlife Service recommends that the two crayfish species native to these watersheds be added to the federal list of endangered species.

The Scoop on Crawdads

“The Big Sandy crayfish and Guyandotte River crayfish are in danger of extinction, primarily due to the threats of land-disturbing activities that increase erosion and sedimentation, which degrades the stream habitat required by both species,” the Fish and Wildlife Service determined in the report. “An immediate threat to the continued existence of the Guyandotte River crayfish is several active and inactive surface coal mines, including [mountaintop removal] mines, in the mid and upper reaches of the Pinnacle Creek watershed.”

Along with coal mining, the report attributed the high sediment levels in the two rivers to logging, road construction and off-road vehicle use, and called attention to the impaired water quality and hazardous concentrations of sulfate and aluminum even after mine reclamation efforts.

Crayfish are especially susceptible to poor water quality because they rely on delicate, feather-like gills that act as ultra-fine filters. High levels of silt or pollutants can clog these gills and inhibit their ability to breathe.

The Fish and Wildlife Service released its report on the Guyandotte and Big Sandy crayfish in April. Despite petitions from groups such as the National Mining Association and the West Virginia Coal Association, the public comment period regarding the proposed endangered species listing ended in June. A timeline for a final decision has not been announced.

Deep in the Ozark Mountains of Arkansas lives another unique and isolated species, one that has been on the endangered species list since 1987. Hell Creek Cave crayfish are rarely seen by researchers because they inhabit underground caves and channels filled with groundwater. This subterranean maze is all but inaccessible to humans, but occasionally one of the blind, albino crayfish is spotted on the surface near an emerging spring of groundwater.

According to a Fish and Wildlife Service report from 2012, this cave-dwelling crawdad’s habitat is jeopardized by poor water quality. Despite ongoing conservation efforts, water quality specialists are finding it difficult to effectively protect groundwater from nearby human influences such as stormwater runoff and sewage plant pollution.

Although some species of crayfish live in muddy swamps and others inhabit rocky creeks or dark caves, all of them need clean water to survive. And as good housekeepers, the tiny scavengers contribute to their watery environment by feeding on decaying matter. They do such a good job at this that some private landowners and farmers introduce them into their ponds in order to clean them up.

If a crayfish population were to disappear completely, the ecology of both the associated water body and the surrounding environment could drastically change. Crayfish are a primary food source for native fish species such as the brook trout, and are also preyed upon by a variety of creatures such as the hellbender salamander, river otters and birds of prey.
Crayfish are nature’s form of underwater custodians. The cleanliness of the region’s streams, ponds and other drinking water sources is contingent upon their survival.