In Tennessee, our staff is currently working with the state legislature to pass the Scenic Vistas Protection Act, a bill that would ban high elevation surface mining techniques such as mountaintop removal in the mountains of eastern Tennessee.
In collaboration with partners across the state, we are building relationships with key members of the House and Senate committees and building grassroots pressure in strategic districts, while also advancing legislation that would increase disclosure and responsible party identification for coal operators in our state.

To keep up to date with our Tennessee work, visit AppalachianVoices.org/tn. 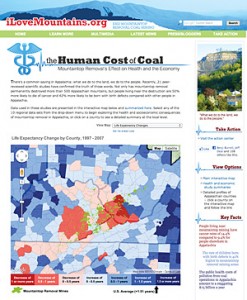 On Valentine’s Day, Appalachian Voices and The Alliance for Appalachia launched a new tool for the campaign to end mountaintop removal.

Dubbed “The Human Cost of Coal,” the tool features an interactive map that definitively plots the connection between mountaintop removal coal mining and significant health problems in Appalachia with detailed profiles of each county.

The data includes poverty rates and population indices from the 2010 U.S. Census, birth defect rates from the Center for Disease Control, the Gallup-Healthways Well-Being Index, and life expectancy and population numbers from the Institute for Health Metrics and Evaluation. The site also includes summaries for twenty one peer-reviewed studies that show human health problems such as heart, respiratory and kidney diseases, cancer, low birth weight and serious birth defects are significantly higher in communities near mountaintop removal mine sites.

“In the past year several studies have come out about the health impacts of living near mountaintop removal mining,” said Ada Smith, 24, a Letcher County, Ky., resident and a speaker at I Love Mountains Day. “Though many of the studies state the obvious for those of us living in these communities, the scientific facts give us much-needed evidence to make sure our laws are truly enforced for the health of our land and people.”

iLoveMountains.org is a project of The Alliance for Appalachia, which is comprised of thirteen local, state and regional organizations across Appalachia working together to end mountaintop removal and create a prosperous future for the region.

To view “The Human Cost of Coal,” visit iLoveMountains.org/the-human-cost.