It’s a feat that no rational human would attempt. A person who laid essentially dormant for up to six months without urinating or defecating would probably die from elevated levels of nitrogen and other wastes. If not, that person would at least show signs of muscle deterioration upon stirring. But not hibernating black bears. 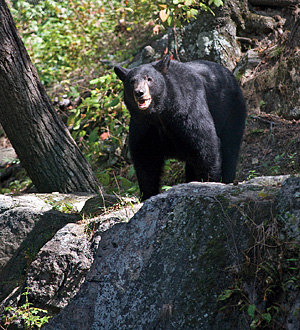 Typical female black bears weigh between 90 and 300 pounds, and males can weigh up to 500 pounds. A male that weighs 500 pounds in fall can lose 100 pounds during the winter.

“[Black bears] wouldn’t have to go through some physical therapy, they would just come running out of that hole if necessary,” says Christopher Ryan, supervisor of game management services for the West Virginia Division of Natural Resources.

The ability of black bears to hibernate without developing osteoporosis or eliminating waste has caught the attention of NASA scientists interested in humans’ capacity for long-term space travel. And, although their body temperatures drop, black bears don’t go into a deep hibernation sleep like some species.

Pregnant females always find a place to den for winter, as most black bears will when the food supply dries up for the season. But when there is winter forage available, male bears and females with yearlings will stay out and gorge themselves instead.

Ryan says that 2010 was a bumper year for acorns in West Virginia, so a lot of bears stayed active. There wasn’t as much food this winter, so most bears have remained in their dens.

Black bears have also found a way to integrate hibernation into their reproductive cycles.

In Appalachia, bears mate between May and September, with peak breeding season toward the end of June and in early July. A female will avoid releasing an egg until she has mated, to maximize her odds of having cubs. And, no matter when she mates, the fertilized egg will wait until mid-December to implant. That way, the six-week gestation period coincides with the winter den season.

Those special reproductive traits come in handy in areas where there are few potential mates, but in West Virginia, a state with about 10,000 black bears, species scarcity isn’t a problem.

In 1999, Ryan says, complaints of nuisance black bears were soaring in the state, mostly in the southern counties. In response, the state initiated early bear hunting seasons in 2002 to entice hunters to the area. Bear harvest numbers increased, but the population didn’t drop as much as expected.

Josh Daniel, a wildlife manager at Cooper’s Rock State Forest and a graduate student at West Virginia University, is studying whether female black bears are using active coal mine sites, which are inaccessible to hunters, as sanctuaries during hunting season.

Using GPS data that Christopher Ryan collected between 2006 and 2008, Daniel is mapping the bears’ home ranges in four southern West Virginia counties and comparing those home ranges to two active mine sites. At the two mines being studied, most mining is occurring underground, though there are some surface disturbances.

Daniel’s initial data suggests that the females living on the mine sites are concentrating their movements within the mine boundaries, particularly when compared to the broader ranges of black bears in the other counties. His study will analyze whether the females on the mines extend their ranges at different times of year, such as the summer months when there is no hunting.

Certain traits, such as black bears’ selective hibernation and induced ovulation, are evolutionary adaptations to the challenges of winter food supply and the availability of mates. But, if Ryan and Daniel’s hypothesis proves true, it would seem to suggest that black bears are also cleverly adapting to a human-impacted landscape.