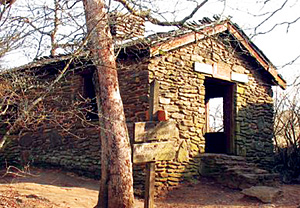 Listed in the National Registry of Historic Places, the famous Blood Mountains stone shelter welcomes hikers at the summit. Photo by Robert Sutherland

Google “Blood Mountain” and you’ll find enough fodder for any armchair traveler. But like any other escape to the outdoors, Blood Mountain cannot be appreciated online.

Named for a battle waged nearby between the Cherokee and Creek Indians, Blood Mountain is the highest peak on the Appalachian Trail in Georgia, and the sixth highest spot in the state. The mountain majestically graces northeastern Georgia’s Blue Ridge Mountains, peaks included as part of the American colonies by King George III when he defined the boundaries of England’s occupation in 1763.

The southern sections of the Blue Ridge Mountains enjoy one of the world’s most botanically rich mixtures of temperate climate plants, with northern species mixing with their southern kin. Once alpine tundra, the ridge line of Blood Mountain is now blanketed in Catawba rhododendron, mountain ash and dwarf willow.

Along the trail to the summit, a variety of rock await the amateur and expert geologist alike. Hikers will pass over low-to-high-grade metamorphic rocks, including igneous deposits of Corbin metagranite, Fort Mountain gneiss, mafic and ultramafic rocks, and Proterozoic and Paleozoic sedimentary rocks.

Trivia about the trail, however, isn’t much better than showing a dry garden a picture of rain. You must hike Blood Mountain to see for yourself.

Hiking Blood Mountain is more like a team sport than lonely immersion into the wild. If you’re not in the best physical shape, you can still make it to the top – although you’ll be surprised by how many “old” people pass you along the way. Before you hit the strenuous sections of the summit trail, spend some time taking in one of the most celebrated portions of the Appalachian Trail’s southern reaches.

Unfortunately in 2008, the trail gained some notoriety when a woman named Meredith Emerson was murdered while hiking alone. In Meredith’s memory, a group called Right To Hike, Inc., was created. The group works tirelessly to keep trails safe by purchasing emergency solar and wireless phones for greenways, parks and trailheads and encouraging hikers to defend themselves and protect others.

Hike a Piece of History 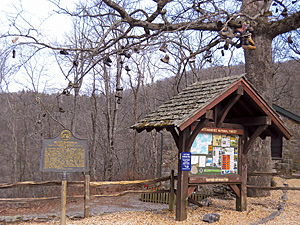 At the Blood Mountain trailhead, "thru-hikers" leave their boots behind to celebrate completing the 2181 mile Appalachian Trail. Photo by Robert Sutherland

If you spend the night at the summit, you might dream of the struggles of the famously mighty mice who dwell within the ruggedly handsome stone shelter constructed by the Civilian Conservation Corps in the 1930s and restored by the Georgia Appalachian Trail Club in the 1980s.

Perhaps you’ll find inspiration from the shoes in the trees, tossed there by “thru-hikers” after trekking the more than 2,000 mile Appalachian Trail.

Tie your boots tight and take off up the steep and rocky trail. It may be a challenge for beginners but the path is well-worn and easy to follow. The views waiting at the summit are worth every step.

In truth, the wilderness area surrounding Blood Mountain is 7,800 acres of peaceful pulchritude. Hike beautiful Blood Mountain. Plant your feet on the summit, and take a stand for your health and for the right to hike safely in Appalachia.