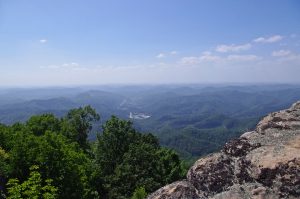 Whitesburg lies nestled into the foothills below High Rock, the main overlook along the Highland Section of the Pine Mountain Trail. Photo by Sam Adams

The first impression when entering the southern end of the Highland Section of the Pine Mountain Trail is that it is going to be an easy walk.

The trail enters the forest where U.S. 119 crests Kentucky’s second-highest mountain near Whitesburg, and abruptly starts downhill. The word “trail” seems to be a misnomer; It’s more like a dirt road – wide and easy to walk on. Trees throw dappled shadows on the route, promising cooling shade, and the verdant slopes foretell water at every bend.

First impressions can certainly be deceiving.

The Pine Mountain Trail is a linear state park that will eventually run 110 miles along the top of the longest mountain range in Kentucky. It begins at the Breaks of the Big Sandy River, where the Russell Fork passes through Pine Mountain, and is complete to U.S. 119, where hikers can temporarily pick up Little Shepherd Trail, a one-lane paved state road, for another 38 miles. When finished, the PMT will parallel the Little Shepherd, then continue to Middlesboro on the Tennessee border. Traveling this route one finds miles of wild splendor, complete with black bear, elk, deer, rattlesnakes and a view that is unmatched in Kentucky.

The Pine Mountain Trail has been designated as the route for the Great Eastern Trail through Kentucky.

The highland section is allegedly easier to hike from the south, but make no mistake: it is only easy for hikers already conditioned to the mountains. Once the trail passes the Flamingo Shelter, not even a half-mile from the southern end, it drops perhaps another 200 feet, then starts back up abruptly. The next several miles take the hiker on a dizzying roller coaster of exposed cliff line, deep woods and mountain bogs.

The Highland Section doesn’t waste time showing hikers why Pine Mountain is famous for its views. Just after passing the sign-in box, hikers find themselves on a narrow spine of limestone and treated to a one-of-a-kind view to the north. Only a tenth of a mile from the box, Eagle Arch, a natural sandstone arch comes into view below the trail.

After passing Eagle Arch, there are some mountain bogs along the trail, but no drinkable water to speak of during the hot months. A heart-pumping mile and a half past the arch, hikers get a brief respite from the heat, as they must shed their packs to pass through the Lemon Squeezer, a narrow split in the rocks.

From there, it’s only another mile to the Southern end of the High Rock Loop Trail, where day hikers descend to Bad Branch Falls State Nature Preserve and a pickup point, but anyone who does not continue from this point to High Rock is missing the figurative high point of the trail.

The trail dips considerably to reach the High Rock Loop trail. Hikers can refill canteens from the stream there before beginning the steep ascent over boulders and along sheer cliffs. In high summer it is an unforgiving sweatbox, with the heat reflected off bare limestone ridges.

But High Rock makes it all worthwhile.

Although it is several hundred feet below the actual summit, High Rock provides an unparalleled view of Whitesburg and the surrounding area. Even Mars Rock, a few hundred feet to the north, doesn’t offer as fine a vista.

Beyond High Rock, hikers plunge back into the woods. Along this section, hikers must be careful to watch for blazes and keep a close eye on the map, as well as the ground. Since this is the most difficult point to reach from both ends, it is also the most difficult to maintain and the least traveled.

From this point, hikers will have several opportunities to leave the trail, but those who continue will climb another 300 feet to Mayking Knob, Kentucky’s second-highest point, then start the jagged descent to U.S. 23. Hikers get their second chance at water, and their first designated camp site at the Adena Shelter, eight miles from U.S. 23 and the end of the section.

The Highlands section is 16 miles long. Hikers can begin on the west side of U.S. 23 at the Virginia/Kentucky border, or on the east side of U.S. 119 approximately 3 miles south of Whitesburg across from KY 1679 (Little Shepherd Trail).

The highest elevation on the trail is 3,248 feet at Mayking Knob.

Maps can be downloaded from www.pinemountaintrail.com