“A successful merchandise lineup hangs on the right products…and the right partner. Coincidentally, we offer both.” – Acme McCrary —Story by Kyle Wolff

Textile plant Acme McCrary is out to prove that big industries can make a big impact. The company’s Pritchard Street facility in Asheboro, N.C., is home to one of the country’s largest solar thermal systems in the country. At the end of 2010, the plant transferred from the age-old steam boiler to solar thermal energy to heat the water they use to produce the 110,000 dozen pairs of hosiery per week. 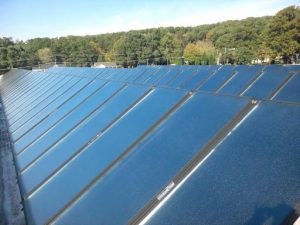 Rooftop solar panels adorn the top of Acme McCrary. The panels are projected to reduce the building's carbon emissions by 249,000 pounds each year.

“We are pleased to be a leader in sustainability and to be a responsible corporate citizen for our community, our employees and our customers,” said Bill Redding, CEO of the corporation. Redding credits his employees on the company’s Green Committee as a major initiator of the project.

“There was a need from the customers and the company to make the corporation more sustainable,” explains Bruce Williams, an Acme McCrary employee and member of the Green Committee. “The idea of solar power came up, and we went with it.”

The Green Committee started researching the prospect of solar energy and found that solar thermal would be the most efficient resource.

Acme McCrary credits one of its major customers, Walmart, as an inspiration, due to environmental standards that Walmart has imposed on its vendors. “Walmart’s sustainability requirements drove us to form our own,” Williams stated. Acme McCrary joined Walmart’s Sustainable Council in 2010.

Acme McCrary found FLS Energy, based in Asheville, N.C. The company specializes in solar energy systems that provide hot water and electricity to their clients. FLS Energy designed and installed the solar thermal system at no cost. In turn, the company is selling the thermal energy back to Acme McCrary at a lower price than the cost of traditional fossil fuel energy.

The system includes 200 solar panels, manufactured by Alternate Energy Technologies based in Jacksonville, Fla. The panels capture heat from sunlight to generate 10,000 gallons of hot water a day at 180° F. Annually, the implementation of solar thermal ultimately will reduce the corporation’s carbon emissions by 249,000 pounds and cut energy costs by more than $20,000.

The project was partly supported by a grant under the American Recovery and Reinvestment Act.

On January 18th, Acme McCrary held a press conference introducing the solar thermal system to the public. North Carolina State Senator Kay Hagan was present for the ceremony and praised Acme McCrary’s leadership and initiative. “The installation of these next-generation solar panels represents a partnership between our state’s textile sector and emerging clean energy sector,” Hagan stated.
The partnership between Acme McCrary and FLS Energy provides an essential link for the future of the textile industry; proving big corporations can make a positive impact on the environment.