Relocation May Be Only A “Chirp” Away 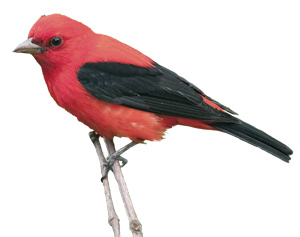 The adult male Scarlet tanager with seasonal scarlet plumage. During the fall, the male loses his exotic, fiery color and his plumage fades to a muted olive, much like the female.

When I first noticed a Scarlet tanager, I was instantly enchanted. Its rich, red feathers caught my eye — a burst of color in a sea of green.

I glanced up, and observed the bird as it sat, perched high in the limbs of blooming, leafy trees in the forest. The air was warm, the sun was bright and school had just let out — the Scarlet tanager’s radiant plumage and light-hearted chirp seemed to represent everything that was summer.

The vibrantly colored male Scarlet tanager is generally recognized for its eccentric scarlet feathers, but a little-known fact is that they are one of the only species of tanagers that experience drastic seasonal variance in plumage.

The wings and tails of both the male and female Scarlet tanager are black or dark brown year-round. During the fall, the male’s exotic color fades to a muted olive.

Scarlet tanagers are classified as American songbirds and are members of the Cardinal family. They live and travel in flocks — called “seasons” — and range throughout central and southern Appalachia, as well as parts of the northern and western United States.

They are medium-sized birds, averaging about seven inches long with a wingspan of about 11.5 inches, and weighing just under an ounce. The diet of Scarlet tanagers consists of mostly insects, worms, snails, berries and fruits.

The voice and song of the male is similar to the song of a hoarse robin — a unique chik-burr. The female also sings, but has a softer, less raspy voice, and sings in response to her male mate, or when she is gathering twigs and grasses for her nest.

Scarlet tanagers are monogamous, and raise one brood of offspring per season. Each brood consists of between one and six eggs, with averages of around four eggs per season. The female bird incubates eggs for close to two weeks, and then the nestlings are fed insects and fruit until they fledge.

Female Scarlet tanagers build shallow nests out of sprigs, weed stalks and fine grass. The female bird then places the nest on a branch, usually between seven and 40 feet high.

Scarlet tanagers inhabit and flourish in extensive, mature hardwood and hardwood-pine forests, and generally require between 25 and 30 acres to thrive.

The Scarlet tanager is a beautiful representation of brightness and warmth of summertime in southern Appalachia. The rich color of its plumage and its peaceful lifestyle are symbolic of a refreshing, slow-paced afternoon in beautiful Appalachia.

While Scarlet tanagers live and thrive in the southern Appalachian region during the summer, they require cooler temperatures and dense foliage for adequate shade from the heat. Rising temperatures caused by global warming may force this beautiful species to relocate to cooler climates.

Other bird species in southern Appalachia threatened by climate change include almost all Warblers, the Black-capped Chickadee, Tree Swallows, the Purple Finch, the American Redstart and Flycatchers.