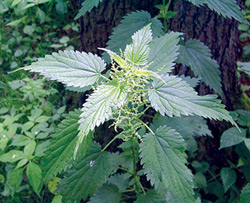 There exists, under our feet, a cornucopia of edible or medicinal plants, fungi and algae. The wide variety of beneficial species in Appalachia—and their application to a multitude of ailments—comprises a massive realm of knowledge. A Peterson field guide lists wild sarsaparilla root, for example, as a folk remedy for stomachaches, coughs, burns, boils, ulcers, fevers, infections and rheumatism, among others.

The trick is to start somewhere, with herbs that are already abundant in your surroundings. The following is a brief guide to using a few common Appalachian plants in less-than-common ways. Information was gathered from Peterson’s Guide to Medicinal Plants and Herbs and plant expert Joe Hollis.

The first on our list is already propagated for consumption and found ubiquitous in the American diet. Corn (Zea mays), however, has another side altogether, contained in its silk. A simple tea from corn silk strands is known as a diuretic and is beneficial to the urinary tract. It is used to treat cystitis, urethritis and prostatitis, and prevents the formation of bladder stones. Corn silk is also considered useful in childbirth, encouraging contractions of the uterus. Corn seeds contain allantoin, a cell-proliferant (in common with comfrey) that speeds the healing of wounds.

Another vegetable with uncommon uses is pumpkin (Cucurbita pepo). The crushed seeds are considered a powerful anti-worming remedy. Mix with milk and honey and drink at breakfast for three days, then purge with castor oil. Pumpkin is also rich in immunity-building zinc, and the juice is beneficial externally for burns and rashes.

One extremely widespread species is Plantago major, or common plantain, a plant usually found in domestic lawns. A tea from the leaves is thought to ease stomach ailments and diarrhea. Plantain is known as an antibacterial, expectorant (cleanses lungs), an astringent (discourages bleeding) and an anti-inflammatory. Externally, this plant is especially useful for bug bites and stings. Chew up a leaf and press the substance on a bee sting; the pain usually stops within a minute.

If you’ve ever encountered stinging nettle (Urtica dioica), you probably knew it all too well. But nettle sting is actually known to promote circulation, and has been used to treat arthritis. A leaf tea is also considered useful against any sort of itch, anemia, gout, glandular diseases and spleen ailments. It is also a depressant, and has a relaxing effect.

St. John’s Wort (Hypericum perforatum) is a yellow flowering herb common to this region but originally from Europe. Tinctures and oil extracts can be used externally on wounds, burns, sores and even varicose veins. St. John’s Wort is thought to be especially useful in healing areas where nerve damage has occurred. Internally, this remedy has been used to treat depression, anxiety and PMS.