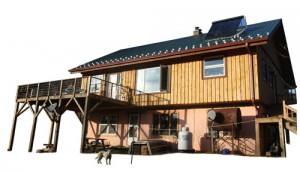 You don’t have to start from scratch to build green.

Nestled in the mountains of Ashe County, N.C., adjacent to fields grazed by donkeys, cows and sheep, you will find a beautiful poplar and hemlock-sided home with a wrap-around deck and staircase leading up to the second-floor front door—all sitting atop an older cement-block house.

When Beth and Ralph Sorell tried drainage repair around their old block home to fix a water and mold issue, they discovered the problem was relentless. When they decided to build rather than renovate, they didn’t realize that they would be building up rather than out.

Visitors to the house climb past the original concrete structure—now the basement—and up a simple locust staircase, built from wood harvested locally. “Locust decking lasts a few lifetimes,” said Beth Sorell. “Somebody local wanted these trees cut and taken off their land, so they weren’t cut [just] for the purpose of the house.”

That is the point of Ian Snyder’s company Mountain Works—sustainable forestry. Snyder selects trees to cut that are overcrowded or are split at the top, and uses draft horses instead of big machinery to pull the logs out of the forest. He brings homeowners on tours through their land and, together, they pick out the types of trees they want logged.

Snyder introduced the Sorells to a builder who not only agreed to build on top of their old house, but told them they wouldn’t even have to move out during the process. “Why destroy an old house and put all that [debris] in a landfill, then rebuild a foundation and basement again?” asked Sorrell.

As you walk in the door, a mosaic of wood greets you. Pine wall paneling decorates the inside walls. Scarlet oak flooring—much of it fallen naturally on the Sorell’s land—stretches across the open-spaced, 1,200 square foot home. A long, sturdy birch kitchen table—handmade by Tom Sternal, owner of Elkland Handwerke—stands proudly next to the kitchen. Plain wood trim—reclaimed from their old roof—frames the windows and doors.

“All of the pine and timbers inside, and a lot of the oak and maple flooring, is off our own land,” said Sorell. “You can go there now and you can’t tell that anything was cut.”

The tall, multi-colored maple cabinetry and the maple flooring lining the guest bedroom is not entirely from the Sorell’s land. “We didn’t have a lot of maple,” said Sorell. “But we also didn’t want to cut [more] maple from our own land.” Enter Snyder’s stock of wood.

“Different people have him cut trees from their yard that they don’t want,” explained Sorell. “But they also don’t need the wood, so he sells it for them.” 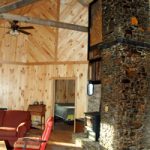 All of the wood was milled locally, some on their own land with a portable sawmill and some at a mill called the Sawdoctor, down the road from where they live.

“The cost is a little bit more, but it’s all local,” said Sorell. “When we started thinking about this project last January, everybody was out of work. The mills had shut down practically.”
“We were able to give them business and keep some of them going a bit longer.”

The countertops are comprised of recycled tiles mixed with marble squares of tile remainders from people’s orders at the local tile store. It is rustic and natural without being overdone.

The house is filled with natural light and heat, thanks to intentional passive solar methods. Sorell and her husband are adamant about solar heating.

“It was almost impossible to find windows that let heat in but don’t let it back out,” said Sorell. Most windows are made to limit the heat that goes out, which also limits heat coming in. She persisted, and finally found Marvin, a company that carries a window model with a high solar heat gain.

“Every afternoon it is so warm in this house,” said Sorell. “We’ve hardly had to use the heat.” Sorell and her husband do have a woodstove that they use for heating and cooking in the winter, as well as a propane heater as backup. They also have a solar water heater attached to their metal roof.

The house is insulated with structured insulated panels (SIPs). These are made of styrofoam encased in plywood, but are considered “green” because they are efficient and airtight—and made in the U.S. SIPs are also structural, limiting the need for additional structural wood.

The guest bathroom adds a touch of Mexico to the house. The flooring is made of marmoleum—the original flax-seed, eco-friendly version of linoleum—that Sorell found in the left-over pile at Build it Naturally in Asheville, NC. The reasonably priced version of this natural coating had a price, however—it was mustard yellow.

“I had to go with the Mexican theme from there,” said Sorell. “So we did the [recycled] blue and yellow tiling in the shower.”

Completing the bathroom is a a low flush toilet from the ReStore, Habitat for Humanity’s used and surplus building store, and a refinished antique cabinet with a Mexican sink bowl inserted into the top—colorful and fun and a perfect match with the tile.

A concoction of antique pieces, restored furniture and reused appliances fills the rest of the hosue. Mimicking the house’s outer shell, the inside is a perfect combination of local, old, new and used—proving that you don’t have to start new to go green.

To learn more about the products, builders and materials the Sorells used for their house, please visit the sites below.