Trekking through the winter terrain 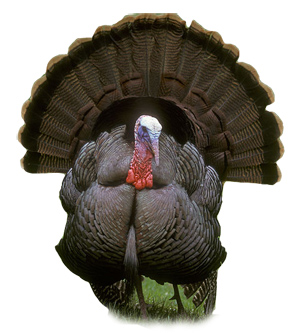 As I rambled up the hill through the tree farm near my house, my dog heard the crunching noise before I did. It was the distinct sound of thousands of newly fallen leaves shuffling around. Something was trampling through the woods to our left. I saw the first one.

Wild turkeys! They were foraging the ground for insects, fruits, acorns, nuts and little bugs, scratching to see what hidden treasures they could find.

My dog whined then gave a bark, the foragers all stopped in their tracks. Eyeing us through the trees, the first one took off in flight, then the second, third… ten turkeys total, all female. The females are much plainer than the males. They lack a beard, which on a turkey is a small tuft of feathers on his chest. Females are also missing a wattle, the red bunch of skin that hangs from a turkey’s chin. Most interestingly, the male’s head changes from red, blue, or white depending on the season. The males have an added bonus of an extra spur, or claw, on their long, stocky, pink or gray legs.

The male struts around, fanning out his tail feathers, and making a distinct gobble, which can be heard up to a mile away (these male birds demand attention, oh yes they do). He lowers his wings and seductively drags the tips of his feathers along the ground, to attract the female turkeys. (And yes, that was plural. Male turkeys mate with many females in a season, not just one.)

Females lay anywhere from 4 to 18 eggs, incubating them in shallow depressions hidden under brush for a month before the young turkey poults hatch. The poults learn to fend for themselves quickly, as female turkeys bear sole responsibility for raising their young.

The Eastern Wild Turkey (Meleagris gallopavo silvestris) is the most abundant of the five subspecies of native turkeys that exist in the United States. They range the entire eastern side of the country from southern Canada to Mexico, thriving in mixed hardwood forests with wide openings, large pastures, fields and marshes.

During pre-colonial times, the turkey was a staple in Native American diets and became a necessity to the first Europeans arriving in America in the 1600s. The birds were found across all of America as Europeans pushed westward. Throughout the 1700 and 1800s, as woodland habitat disappeared and population demands increased hunting, the wild turkey began to disappear from its habitat. By 1920, the wild turkey had been hunted to near extinction and could only be found in the most remote places. It disappeared completely from 18 of the original 39 states it once occupied. 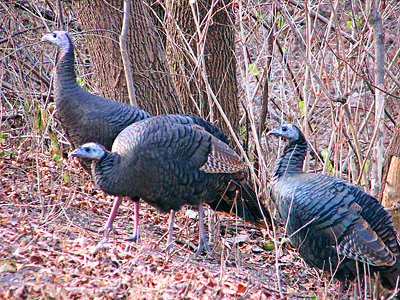 Female wild turkeys have great eye-sight and are extremely alert and wary of their surroundings. Photo by D. Gordon E. Robertson

After the Great Depression and following World War II, reintroduction projects were implemented to restore the wild turkey. The species made a huge comeback as a result of trap and transplant programs. The wild turkeys were captured from their remote hideouts, bred and brought back to thrive on their native lands, which were simultaneously undergoing reforestation projects.

Populations were estimated to be around 30,000 in the early 1900s and today’s estimates are around seven million. With the exception of Alaska, every state in the U.S. now has huntable turkey populations.

Unlike domesticated turkeys, wild turkeys are a smart bunch. They have great eye-sight and are extremely alert and wary of their surroundings. It often takes two men, one to call the bird and one ready and waiting with a gun, to bag a wild turkey.

Hunting seasons officially began in 1991, with each state setting the rules on bag limits and hunting season dates. Check out nwtf.org for details on your state’s regulations.

Since my original sighting of the turkeys, I have seen these ladies on almost every walk through the tree farm near my house. Perhaps there is good foraging up there, or maybe, somehow, they know that area is protected from hunting. I can say one thing, I like having my own little flock in the woods to keep an eye on, and I think they keep my dog daydreaming about having his own little turkey flock too.