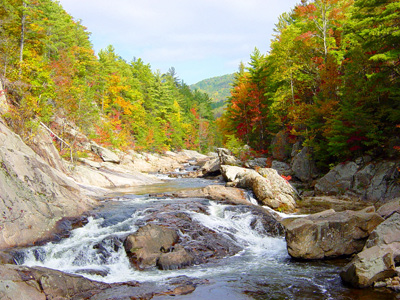 The Foothills Conservancy protects this section of the Wilson Creek area managed by the Wildlife Resources Commission. Photo by Kevin Knight

Thanks to organizations like the Blue Ridge Conservancy, land trusts have protected hundreds of thousands of acres in Appalachia from development—and counting.

In North Carolina, the Blue Ridge Conservancy— recently formed from the merger of two existing organizations—has collectively protected over 15,000 acres of rural and scenic land in the northwestern corner of the state since the late 1990s.

“Our aim is to preserve the land from development and to maintain a heritage of farmland for years to come, which in turn benefits not only us as human beings, but also wildlife on large scale,” said Blue Ridge Conservancy Board Member Hanes Boren.

Land trust organizations partner with private landowners to protect natural areas from development by acquiring acreage through conservation easements, which are either purchased by the organization or donated by the landowner. The organization gains control of protecting the land while the private individual retains ownership.

These agreements typically prevent any development or other actions that would interfere with conservation efforts or affect biodiversity and migration routes.

And it’s not just for the short-term: Even if the land is sold or passed to family members as inheritance, the terms of the easement are still binding.

One of the most well-known national land trust groups is The Nature Conservancy, a non-profit organization that has acquired—and protected—hundreds of thousands of acres in the last 40 years.

Other Appalachian land trusts include:

Tennessee: The Land Trust for Tennessee works throughout the counties of middle and eastern Tennessee to protect rare habitats and important agricultural areas. The trust recently acquired farmland in Greene County that will help protect the fertile area from development and preserve two endangered species in the Little Chucky Creek. LandTrustTN.org

Ohio: The Richard and Lucile Durrell Edge of Appalachia Preserve is owned by the Ohio chapter of The Nature Conservancy and the Museum of Natural History and Science. To date, it is the largest privately owned pro- tected natural area in Ohio. The area provides a habitat for over 100 species of rare plants and animals. CincyMuseum.org/explore_our_sites/edge_appalachia/

Kentucky: The Kentucky National Lands Trust organization is working to connect existing protected areas on Pine Mountain. The linked system of lands will conserve a 110-mile migratory path. Areas within the forest block will be designated as Kentucky State Nature Preserves. KNLT.org

West Virginia: The West Virginia Land Trust holds a number of easements, many protecting lands adjacent to state and national parks and forests. The Trace Fork Canyon easement allowed the landowner to open up a pre-historic Indian trail for public access. WVLandTrust.org

Virginia: The Land Trust of Virginia promotes a project called the Appalachian Trail Buffer Initiative. Easements in this area are acquired to protect properties near the trail that provide a natural buffer between it and developed areas. LandTrustVA.org

North Carolina: The Foothills Conservancy is working to protect lands in seven counties. In 2007, they helped facilitate a transfer of 43 acres to the Blue Ridge Parkway. FoothillsConservancy.org