On December 3, 2008, iLoveMountains.org launched a major campaign asking President-elect Obama to end mountaintop removal coal mining – and to do so within the first 100 days of his presidency.


The project, called Obama’s First 100 Days – End Mountaintop Removal Coal Mining, is designed to encourage web users from all reaches of the internet to submit a letter to Obama outlining the steps he can take to end the devastating practice of mountaintop removal. The campaign will focus especially on blog users as well as members of the popular social networks FaceBook and MySpace, and provides a default letter for people to send if they prefer not to write their own.


Key points in the letter ask President-elect Obama to:

• Reverse the eleventh hour Bush administration rules that have allowed Big Coal to dump toxic mine waste into streams and rivers;

• Enforce existing laws that the Bush administration has refused to enforce, such as the Clean Water Act, and to hold the EPA, Office of Surface Mining, Reclamation, and Enforcement, and the Army Corps of Engineers responsible;

• Prioritize Appalachia in America’s clean energy future by endorsing development of the huge wind power potential in the Appalachian mountains and investing in green, union jobs for the region;

• Tell Congress to pass the Clean Water Protection Act, which would permanently protect clean drinking water for many of our nation’s cities as well as prevent many of the destructive practices endemic to mountaintop removal coal mining.


The Obama’s First 100 Days project also asks individual bloggers and Facebook and MySpace networkers to help spread the word about the project by sending email invites to friends and posting the 100 Days widgets on their blogs and social networking pages.


iLoveMountains’ call to action states “With all the issues facing his new administration, it is vitally important that President-elect Obama hears from people like you who love our mountains and who want to see an end to mountaintop removal coal mining. That’s why we need you to act today.”


Visit iLoveMountains.org/obama to participate in the project, and send a message to Barak Obama today! 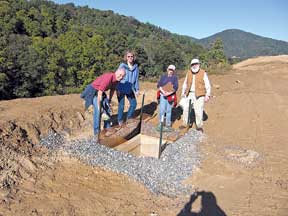 
Graduation day falls in mid-May or June for most students, but for the first six graduates of the Watauga Riverkeeper’s Muddy Water Watch program, graduation day fell on October 20.


Though there were no caps and gowns to mark the occasion, the day was a significant one for Jocelyn Elliott, Dick Hearn, Joan Hearn, Dr. Shea Tuberty, Beth Weaver, and Craig Weaver. As graduates of the inaugural Muddy Water Watch program in the Watauga and Elk river sheds in North Carolina, the participants completed five classroom trainings and a half-day field visit designed to give them the know-how to help prevent the largest source of water pollution: sediment. Sedimentation is of special concern in areas such as Boone, where the trainings were held, because of the amount of new development occurring in the area.


Muddy Water Watch trainings are being sponsored by every Riverkeeper program in North Carolina. Training is free and occurs weekly over a six-week period. The next training in the High Country will begin in March of 2009. If you are interested in participating in the program, contact Donna Lisenby, the Upper Watauga Riverkeeper, at (828) 262-1500 or by e-mail at donna@appvoices.org for more information.