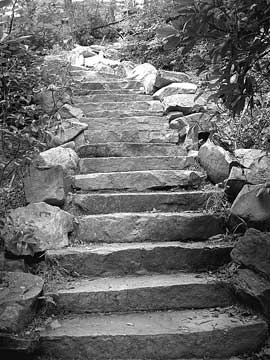 Among the picturesque plains of the North Carolina Piedmont, the Sauratown Mountains rise north of Winston-Salem.


Capped by cliffs, these peaks on the east side of the Blue Ridge are known locally as the “mountains away from the mountains,” and take their name from the Saura Indians, who lived in this area as early as 1,000 A.D.


Here, among the hills of scenic Stokes County, just below the Virginia border, Hanging Rock State Park stands like a crown of the Sauratown Mountains, near towns called Danbury and Lawsonville. The park boasts about 7,000 acres, attracts as many as 350,000 visitors a year and takes its name from a rock outcrop with an elevation of 2,150 feet. This natural wonder - the “Hanging Rock” - stands quite distinctively among the surrounding hillsides, which have an average elevation of less than 1,000 feet.


Consider this park an oasis. The Civilian Conservation Corps constructed much of the area’s handsome stonework in the 1930s.


For the hiker, the park’s trails range from treks that scale rocky mountainsides to wide pathways built with steps over sandy slopes - accessible to nearly anyone.

One trail, traversing much of the park’s landscape, leads to a stone observation tower, built atop Moore’s Knob at an elevation of 2,570 feet. 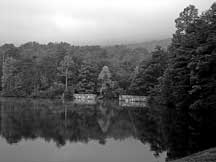 A much easier hike originates at the parking lot near the park’s interpretive center and leads to two waterfalls on Indian Creek: the tiny Hidden Falls and the wispy Window Falls. Come here in autumn or late summer, and there may be hardly enough water to count either as a waterfall. In September 2008, both falls looked like little more than cliffs boasting wet-weather streams. But never mind whether you see water, this two-for-one waterfall hike - at little more than a mile - still provides a great, easy-to-moderate workout.


Elsewhere, the park also offers Tory’s Den Falls, which takes its name from a cave believed to have been used by Tories during the Revolutionary War. One tale says as many as 100 Tories inhabited the land around the cave, though park officials say the exact number might be open to speculation.


Perhaps the most rewarding hike at Hanging Rock State Park originates at a section of land between Moore’s Spring Road and Hall Road, away from the main part of the park. Here, an easy, one-mile round-trip hike leads to a waterfall known simply as the “Lower Cascades.” This is a must-see. This unforgettable and practically perfect waterfall is pictured on postcards, available at the park’s concessions area. A caption notes the Lower Cascades as “the largest waterfalls in the park and thought to have been first discovered in the 1800s by Moravian Botanist Lewis David von Schweinitz.”


Talk about an easy adventure. The hike to the Lower Cascades begins in the wooded canopy of a young-growth forest. Then it marches slightly downhill and uses an elaborate set of wooden steps to reach a rocky creek bank. From here, all kinds of views unfold of the 30 foot high cascade, splashing splendidly in a small canyon. A shallow pool lies at the bottom of the falls, with a scattering of rocks providing hideouts for crawfish.


Take your time. And pack a picnic. It might be a short walk getting here, but that will simply leave you with more time to take photographs and savor the beauty.
Categories: 2008 - Issue 7 (December) | Hiking the Highlands | The Appalachian Voice