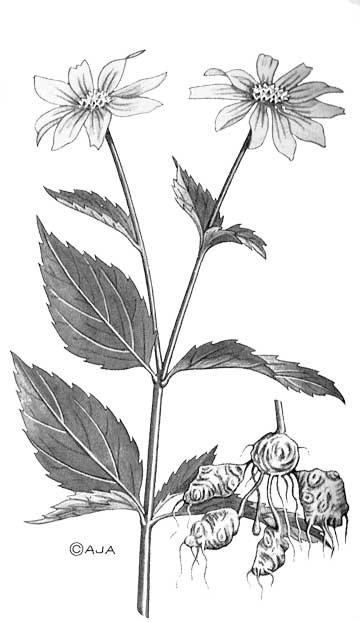 
As the sun weakens at the end of the growing season and flowering plants fade to brittle remnants, gardeners and wildflower lovers resign themselves to a few months estranged from nature’s brilliant colors.


But one wildflower - the Jerusalem artichoke - can satisfy the appetite in winter if not the eye. Jerusalem artichoke (Helianthus tuberosus) is a towering native North American sunflower species with bright, golden flowers. It is valued, ironically, not so much for its bloom, but for its edible underground tuber.


The badly misnamed plant is neither an artichoke nor from Jerusalem. The confusion stems from a similar-sounding Italian word for sunflower- “girasol.” Indians sensibly called it “sunroot.” The edible “roots” are actually underground stems called “tubers” (the same is true of potatoes), so the name “sunroot” is still not botanically accurate, but is descriptive nonetheless.

Though sunroot grows wild, Native Americans cultivated the species and introduced it to European settlers. Today many gardeners grow it as both an ornamental and a vegetable. It is easy to grow; it has few insect and disease pests, and grows so quickly and thickly that it shades out competing weeds. This trait can also be a drawback, though. Sunroot itself can spread and become a weed unless all of the tubers are removed at harvest, or the shoots pulled up as they sprout in the spring.


Sunroot grows tall (6 feet to 10 feet) like other sunflowers, and the blooms are also similar in appearance except the sunroot flower is much smaller, about the size of a large daisy. The plants have a bushy growth habit, producing numerous blooms on each plant. When planted in a row, sunroots form an impressive screen and a beautiful wall of golden flowers in late summer.


The sunroot species has different strains with varying characteristics. One produces red, elongated tubers about the size of fingerling potatoes, while another strain yields white, chunky, fist-sized tubers. The tubers can be dug anytime in fall or winter after the foliage dies. Ideally, sunroot should be left in the ground and dug as needed. Its quality rapidly deteriorates if not stored in high humidity and at a low temperature. Fortunately though, in the ground it can usually withstand freezing temperatures throughout the winter.


Raw sunroot, having the texture and taste of chestnuts, is often added to salads. It can also be cooked in various ways, in almost any manner that potatoes are prepared. Unlike potatoes though, sunroot is not a starchy vegetable, but rather consists of a substance that breaks down into fructose, making it safe for diabetics to consume.


Sunroot grows wild throughout Appalachia and much of North America. Some authorities speculate that its original range was limited to the center of the continent, extending into the Great Plains. The Plains Indians fed sunroot to the explorers Lewis and Clark. The spread of the plant by Europeans- and even among Indian groups before the arrival of Europeans- resulted in such a wide distribution that locating a point of origin is difficult; if it ever really had a single origin.


A historically accurate Thanksgiving meal should include sunroot, which was readily available in New England and Virginia in late fall and winter, and a food the Indians would likely have provided to hungry colonists. Early French explorers in Canada sent the tuber to France where it quickly caught-on and became popular by the mid-1600s. Sunroot grew to be so common in Europe that one observer described it as “being so plentiful and cheap, [it] rather bred a loathing than a liking for them.” It was the culinary equivalent of the potato before the potato (also a New World vegetable) became established in European diets.

Sunroot was used to produce ethanol during both world wars, and may yet have a future as a fuel if energy prices make it economical. In addition, the vegetable could potentially be a significant source of commercial fructose (a sugar used in processed foods), but large-scale production and harvesting is problematic compared to corn, the major source of the sweetener. The above-ground stem and foliage of sunroot can be beneficially fed to livestock, but it is not competitive with other types of forage in terms of nutrition and ease of harvest.


Despite its versatility and early discovery, sunroot has never caught on in our industrial food system because its characteristics do not conform well to mechanized, large-scale, efficient production. It’s an example of a nutritious, tasty food- literally in our backyards- remaining buried in the wild and forgotten because it can’t be economically processed and packaged by the millions, and warehoused for months on end. Even the smallest garden plot or flowerbed can conveniently provide several pounds of tubers to a household, with the added benefit of riotous blooms in late summer at no extra cost.