A High Water Year on the New & Gauley Rivers 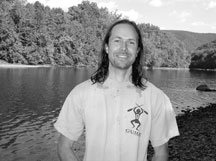 I made the best move of my life in the spring of 1997. With my ’84 Firebird stuffed with most of the gear I’d use to live outside until October, I left Charlottesville, headed west. I’d made this trip to West Virginia’s New River Gorge many times before, but always knowing that I would have to return to school after a weekend of rock climbing or whitewater training. Now I’d graduated from UVA and my only commitment was to work as a whitewater raft guide and climbing instructor at the Gorge. I would camp in a tent community of guides on the outfitter’s property and be paid by the trip for guiding. That first season, I would fall in love with the

New and Gauley Rivers—and with the woman who would become my wife.


No place could have better exemplified the beauty and possibility of the world awaiting me beyond college. My adventures there had started on the bands of gorgeous sandstone cliffs lining the rim of the Gorge, far above the river, where I’d been introduced to rock climbing in college. I had an immediate affinity for the rock; climbing came naturally and I immediately knew that, for me, it was one of life’s greatest pleasures. While the guide’s lifestyle would allow me to experience climbing in places all over the country, the Gorge remains one of my favorite climbing areas. The thousands of routes on high-quality rock offer a lifetime’s worth of climbing and some of the best variety anywhere.


I was also immediately enthralled by the context—the continuous mountains and hollows; the clear, steep creeks; the forests so lush that I was reminded of Brazil or the Pacific Northwest; the great river, viewed from the top of a climb, roaring through rapids below. I’ll never forget the first time I slept out in the open on the rim of the Gorge. From there, the ribbon of fog sitting just above the water at dawn looked like a white river that grew as it gradually rose nearly a thousand feet to spill over the cliff top, enveloping our band of climbers as we cooked our breakfast.


When, in my last semester of college, I spoke with an outfitter and learned that it would be possible to live at the Gorge and support myself as a guide, I almost couldn’t believe my luck. I’d been a serious student in college, and thinking of the freedom and joy of living outside and focusing on climbing all season was overwhelming. I had to do it.


I hadn’t had much experience with whitewater at that point, so I had asked the outfitter about my prospects for work as a climbing guide. The company’s climbing program was growing, so they were happy to take me on. There was, however, one caveat: I would also have to train to guide on the river. I agreed, thinking vaguely that the whitewater training sounded like fun, but I didn’t have an inkling then of how immersed in whitewater I would become!


It was a high-water year and the river’s power was awesome. The New is famous for its big water in the spring—the gigantic waves and hydraulics that rafts and kayaks must contend with. I’d never been in a whitewater raft before that spring. On my first trip, the river—bucking, spinning, flooding, and threatening to capsize the 14-foot boat—seemed like chaos, but I was about to begin the never-ending process of learning to know the river and intimately understand its dynamics.


I was one of about six committed raft guide trainees that year.


At first, an experienced guide would guide the boat through all the rapids. As we trainees learned more, we would take turns guiding, sitting beside the trainer who—partly in the interest of self-preservation—would always be ready to take over the steering.


The next step was running the river in “turkey boats”—rafts of trainees who would take turns guiding, with no fully trained guide aboard. We’d accompany a commercial trip of at least several other rafts, whose guides would be ready to help if we got into serious trouble. We did a fair amount of whitewater swimming that spring, but managed to avoid the very serious hazards of undercut rocks. I seized every opportunity to be on the river, and I learned fast.


The thrill of engaging the dynamic whitewater environment, and the pleasure of understanding it, led me to buy my first kayak that season. I had taught myself the Eskimo roll the summer before on a relatively flat stretch of river, so I had a small head start.


Another advantage was that I found myself in a whitewater culture. Guides lived, breathed and—a generally loquacious bunch—talked whitewater constantly. Whereas it was harder to find climbing partners among my peers than I’d expected, it was impossible not to find friends itching to go paddling, so I was soon kayaking on most of my days off. In the evenings, after a long day working on the river, we’d run it again for fun. I came to love kayaking and raft guiding equally. I loved the challenge of gracefully handling a large, heavy craft in whitewater, and the way a raft must crash through waves and hydraulics. In a kayak, one sits just below the water’s surface, and, therefore, right in the midst of the river’s features. This, combined with less momentum and a much more streamlined design than a raft, lets one feel intimately connected to the river.


Around the middle of the summer, I struck up a friendship with a guide from my training class named Heather Donaldson. Immediately after college, she had taken a two-year associate position at an economic consulting firm in D.C. At the end of her stint there, she had watched colleagues go off to graduate school and lucrative careers, but she was compelled to do something different. Having rafted with her father growing up, she was drawn to the river.


Heather and I had a wonderful time together that season, basking in the joy of each other’s company and of living outside. We were also starting to discover the depth of our shared values. Immediately after the season ended, we would embark on an eight week cross-country camping and climbing trip, and we’ve been together ever since. Years after that first season, I proposed to her on a cliff overlooking the Gorge. This June, we spent a week’s vacation camping there with our four month old daughter.


The New River usually mellows out in mid-summer, when the water level drops. It is still a serious Class IV run, but this is when guides start dreaming about the Gauley. A smaller river, the Gauley drops steeply through a rugged and more remote canyon.


Generally considered second only to the Grand Canyon for the quality and intensity of its commercially runnable whitewater in this country, the Gauley holds a very special place in the heart of every boater I know who runs it. It is much steeper, narrower, and more technical than the New, but also boasts big waves and hydraulics. Gauley season—when, four days a week in September and October, water stored all summer behind the Summersville Dam is released, creating in the fall what might be average natural spring flows—is the pinnacle of the West Virginia whitewater season.

The Upper Gauley section, beginning right below the dam, offers the biggest action. Its five Class V rapids give pause to even the most experienced guides, and any complacency in many of the countless smaller rapids can be very dangerous. It demands a lot of energy, focus, and hard work, but this is amply rewarded with the unparalleled fun it offers—which, along with the beauty of the craggy canyon, is what makes the Gauley famous.


It is humbling to attempt to do the Gauley justice in words. At Pillow Rock rapid, the river charges through a constriction aimed at a big boulder and piles up on the rock in a huge version of what is technically known as a “rock pillow.” Rafts and kayaks ride up on the pillow at high speed, and not all rafts make it back down right-side-up.


The feeling of a good run at the second drop of Lost Paddle Rapid (where a friend actually lost his battle, and was forced to hike out, the first time I kayaked the stretch) is unforgettable. The raft stands up against, and crashes through, the giant wave at the lip of the drop, before going over the drop, angling steeply downward, only to crash through another large wave before the crew is forced to regain composure to help the guide paddle the boat around “Six-Pack Rock.” If a guide pins his raft on Six-Pack, he owes each of the other guides on the trip a six-pack, but this will be the least of his concerns.


The Upper Gauley’s final Class V, Sweet’s Falls, is a 14-foot waterfall that can be run very gracefully, but can forcefully eject guide and crew if they are left or right of the subtle correct line.


After that first summer of learning through immersion, I was able to both kayak and raft guide the Upper Gauley a few times that first season, and I was hooked. I would be back to guide full-time for the next three seasons.


Heather and I return to the Gorge area—a four-hour drive from our home in Charlottesville—whenever we can, though the demands of work and family sometimes make us think wistfully of the days when we lived there. Its rivers and rocks, forests and creeks, will always occupy a central place in our hearts, and I imagine us climbing and boating there for the rest of our lives.


Tom Cormons is the Virginia Campaign Coordinator for Appalachian Voices. Tom earned his law degree with a concentration in Public Interest Law and Policy at UCLA and is a member of the Virginia State Bar. He lives in Charlottesville with his wife, Heather, and daughter, Brooke, and spends any free time he can find climbing, hiking, running rivers, or playing music.