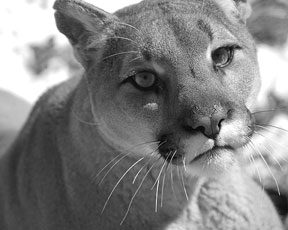 
Pop quiz: Which mammal has the most widespread distribution in the Western Hemisphere? No, it’s not the rat, the squirrel, or even the deer. It is us, ladies and gentleman—human beings. But this was not always, or naturally, the case. In the not-so-distant past, the mammal with the most extensive natural range in the Americas was—a large cat.


This is no ordinary cat. It is a cat of mystery. A creature often surrounded by fear and misunderstanding. And no wonder. We cannot even agree on its name. Sometimes called “the Cat of One Color”, its many aliases include: puma, panther, mountain lion, cougar, as well as catamount (the mascot of Western Carolina University).


The cougar (the name preferred by experts) is the largest of the small cats. It is classified as a small cat because it purrs like a housecat instead of roaring like a lion. Yet this once-common neighbor of ours is now practically eliminated from the Appalachians. Its mystique is such that locals and visitors alike constantly claim to have seen one, much like a ghost in the attic.


Should the fate of this cat be of any concern to those of us living beside these beautiful mountains?


Through most of his career, biologist and naturalist Donald Linzey has been haunted by the intrigue of the cougar. In 1963, as a young doctoral student from Cornell, Linzey discovered the marvels of the Great Smoky Mountains National Park as he conducted research there on the flying squirrel. Subsequently he became a park naturalist, then principal investigator for endangered species research in the southern Appalachians and a biology professor at Wytheville Community College in Virginia. He has stayed close to the Smokies both in location and affection.

In 1978, Linzey organized a conference on the Endangered Species of Virginia, the first one of its kind in the state. It was at this conference that his devotion to the cougar arose. Linzey’s research funding has focused on a variety of other projects, but he has voluntarily dedicated the last 30 of his life to verifying the status and ensuring the survival of the cougar.


That commitment brings Linzey to various lectures, speaking on the “Current Status of Mountain Lions in the Great Smoky Mountains National Park.”


Imagine your kitty at home (or the one on the street). Multiply its size by about 10. Now your tabby is about 125-150 lbs. Paint its fur a light tan color. Elongate its tail so that it drags down with a curved tip that just scrapes the ground. Now paint that tip black, and you’ve got yourself a cougar, a beautiful and majestic cougar.


This cougar is a shy and solitary animal, needs large ranges and prefers to remain elusive, . Linzey says. It even limits interactions with its own kind to an occasional “booty call” with the opposite sex. A mother will have 2-4 kittens that remain with her until they are 1-2 years old. And though Mama’s fur is smooth and patternless, baby cougars are spotted until about the time they leave Mama.


Though the cougar was once widely distributed in the Americas, the majority of the current cougar populations are out West, with a small representation in Nova Scotia and Florida. Many of these populations are still heavily hunted. Between 1907 and 1970, around 70,000 cougars were killed in the United States, . Linzey reports. It was once believed that there are many different kinds of cougars, and therefore distinct populations in various areas of the United States. But a recent DNA study by . Melanie Culver at the University of Arizona has shown that worldwide, there are only six different species of cougars, and only one of those is found in North America.


The cougar is so notorious and alluring that experts such as Linzey work round the clock to verify reported sightings of the cat. To date, Linzey possesses the only two known photographs of cougars in the Smokies, though he feels that there have been several other credible sightings. There is, however, no evidence of a breeding population. Claims of cougar sightings are constantly streaming in, but few have actually seen this ghost-like cat. Usually, they turn out to be a short-tailed, tufty-cheeked bobcat or even a house cat.


Some people claim they saw a large black panther, but no black cougar exists in natural history records anywhere in the world, says Linzey. Is this fascination with seeing cougars born out of longing or fear? Do we want the cougar back, or

would we rather it stayed gone?


Though there is no current effort to reintroduce an eastern cougar population, there is discussion of this possibility.

Return of the cougar

Some would say that the cougar naturally belongs in the Appalachians and is only gone because we have destroyed its habitat and hunted it to near extinction. But, is the cougar a danger to humans? Linzey and other experts tell us that encounters with cougars are rare due to their shy and solitary nature. On top of that, the risk of attack is quite low. For example, Yosemite National Park, home to a healthy population of cougars, has millions of visitors a year. The number of cougar attacks in the park’s history – none.


If the risk to humans is almost negligible, would the cougar contribute to our Appalachian ecosystem? The cougar is a top predator, feeding primarily on deer. It therefore plays an integral part in balancing wildlife populations. We certainly see that in a cougar-less eastern United States, deer populations are exploding and causing many problems, Linzey says.


To help the mountain lion survive, we need to educate the public, Linsey says.


“We don’t want more people shooting them and killing them off just because they’re afraid of them, so we have to teach the public how to live with them just like we live with black bears and grizzly bears and grey wolves out west, and everybody seems to be getting along pretty well.”