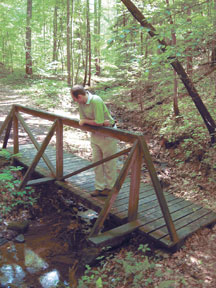 All of a sudden, we saw a snake, lounging in the cool, rocky waters of a creek in the Kanawha State Forest.


It was a little snake, about a foot long. Yet I couldn’t tell what kind it was. Neither could my hiking buddy, Justin.


Was this a fake snake?


Did somebody plant this here?


The CCC Snipe Trail, after all, is named for the Civilian Conservation Corps, which set the course of a water line in the woods in 1939. That line served CCC Camp Kanawha and, later, the Kanawha State Forest.


Now here comes the legend: New arrivals at Camp Kanawha were often initiated by being sent on a “Snipe Hunt” at night along this trail, hunting for birds. Such a funny practice ultimately ended, however, when several rookies got lost in the early 1940s.


Today, it is amazing that the remote wilderness of the Kanawha State Forest lies just 15 minutes from the urban landscape of Charleston, the West Virginia capital.

Prior to being established as a state forest with facilities for the public, this was a mining and timbering area.


Dials offered a brief tour of the state forest, bouncing along dusty, gravel roads that lead to the shooting range and overlooking the woodsy campground, carved into the rocky hills.


It takes about eight miles to get from downtown Charleston to the state forest.


“But,” Dials said, “if you get out and use the forest, you’ll probably see less than half of it.”


ALONG THE CCC SNIPE TRAIL, we discovered remains of an old coal mine that had been sealed by the CCC in the early 1940s.


Once, while working deep inside this mine, the CCC crews discovered 26 mash barrels that had been abandoned by bootleggers.


A short spur from the trail leads to the mine entrance, where a marker notes that the mine holds 11 million gallons of water.


Beyond the mine, in just a few yards, the trail crosses a wooden footbridge. Beyond that, in hardly more than a couple hundred yards, the CCC Snipe Trail forms an intersection with more trails in the state forest.


The Alligator Rock Trail - rated moderate to difficult - is a half-mile hike named for an outcrop that looks like an alligator.


The first time we crossed that footbridge on the CCC Snipe Trail, that snake lay in the water, his head on a rock.


“I think he’s just trying to cool off,” Justin said, carefully peering into the creek.


I soldiered on, not wanting to stare.


Still, I couldn’t take my eyes off the creek with our return.


Turns out, that snake was no phony. He was gone.


Did he swim downstream? Was he on rock? Was he waiting for us?


Never along this trail did I see a snipe.


But, be careful: The West Virginia woods are, indeed, wild and wonderful - just like the state slogan says.

TO GET THERE: From I-64 in Charleston, take Exit 58A, drive south on U.S. 119. Turn left onto Oakwood Road at the second stop light (following the brown and white signs). Go 0.75 miles. Take a left before George Washington High School, continuing on Oakwood Road. Turn right onto Bridge Road and then right onto Connell Road. At the bottom of Connell, make a sharp left onto Kanawha Forest Drive and follow to the forest entrance.