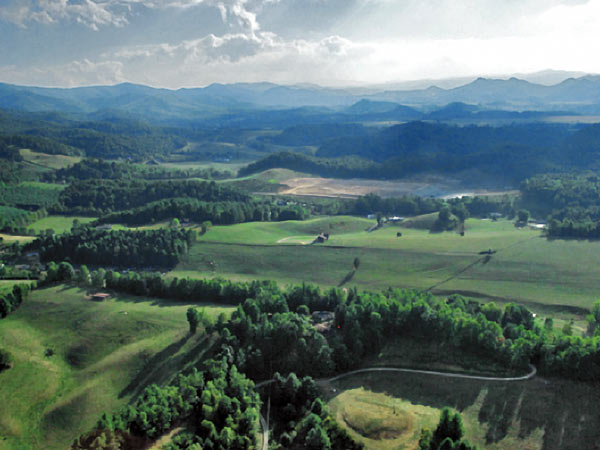 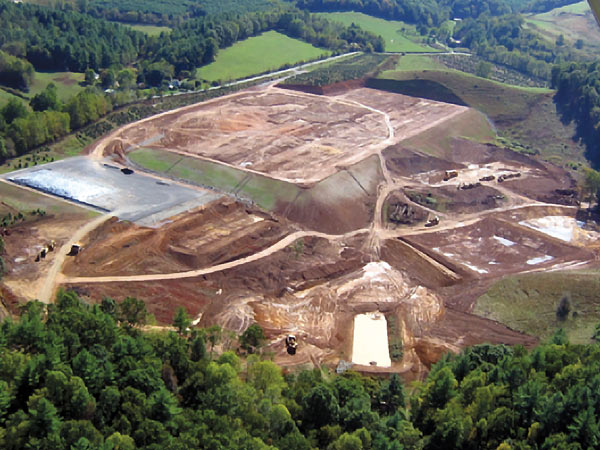 INDUSTRIAL AGRICULTURE MEETS THE MOUNTAINS - Many residents of Johnson County have little use for the pollution and visual scars CAFOs create across their beautiful mountain landscape. Photos by Dennis Shekinah (above) and Z. Lance (below). 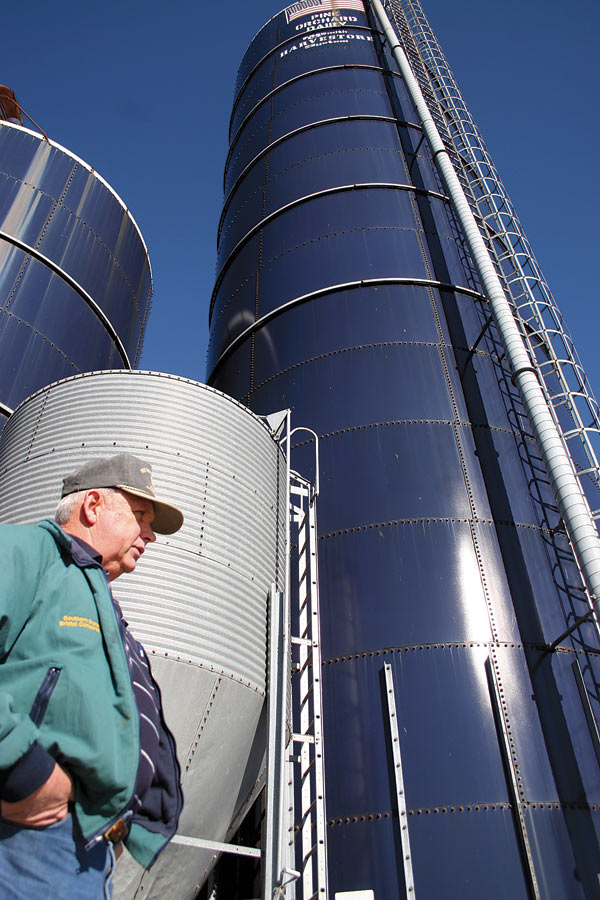 Vance Gentry, a dairyman himself, is one of the Johnson County residents supporting the CAFO.
Photo by Kent Kessinger 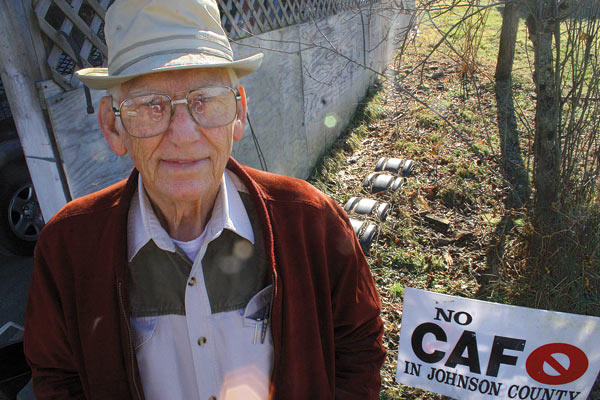 “No CAFO” signs, like the one in Jack Mays’ yard, have sprung up in yards all across Johnson County in the last few years. Photo by Kent Kessinger. 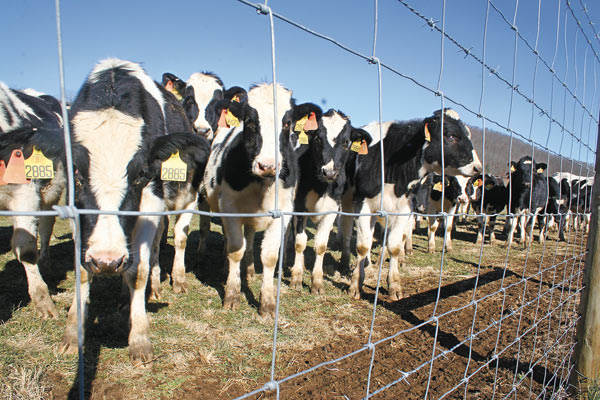 A conventional small dairy in Johnson County, TN. By Kent Kessinger.
images/AppalachianVoice/AVJan06/Photos/circles/Circle_CAFO.gif
For 33 years, eight months, and 20 days, Vance Gentry of Shady Valley in Johnson County, Tennessee milked cows at four in the morning and four in the evening. He still wakes up before his alarm even though he sold his herd two years ago, unable to make a living.

Johnson County lies tucked in the Appalachian Mountains in the far northeast corner of Tennessee. It is a county rich in dairy farming, a tradition however that’s been fading as small dairies become unsustainable for local farmers. Concentrated Animal Feeding Operations (CAFO) are the new, large dairies that are surfacing all over the nation in rural communities.

Over the past 20 years the number of dairies in Tennessee has dropped from 3,695 to 703. Gentry remembers 11 Grade A dairies in Johnson County alone. Now only one is left. The pressure of high production costs and low milk prices forced Gentry to join the scores of other dairymen that gave up their business after years of struggling to make ends meet. “I was getting the same price for milk I was getting 25 years ago, while the cost of producing milk continued to increase,” he said.

Dairymen buy their equipment, feed, water, etc. at retail prices but sell their milk at mandated wholesale prices leaving little room for earnings. “You’ve got to make a profit and there’s not a lot of incentives to keep you going,” Gentry said. “When it comes down to it, you have to have a bigger operation to maintain a profit.” And that’s exactly what is being built a few miles up the road near the town of Mountain City.

The controversy surrounding a new 690-cow CAFO has polarized the Mountain City community, driving families and churches apart as its residents grapple with the economic and environmental impact this new dairy will have on their town. As the first CAFO in the county, High Mountain Holsteins, in partnership with Maymead Inc, is set to begin milking in June leaving behind a trail of battles. Part of what has stirred opposition to the CAFO is the large number of cows that are kept and fed in a confined area with little access to sunlight, fresh air, and movement. The over 20,000 CAFOs in the U.S. produce 575 million pounds of manure a year, which is stored in lagoons and sprayed on surrounding property. Since 2003, the EPA has set mandatory regulations on CAFOs with additional regulation set by each state.

In the wake of large CAFOs there have been concerns about environmental and economic safety. Counties in six states have enacted moratoriums on new CAFOs awaiting more research on public health affects, environmental damage, and public nuisances. North Carolina recently renewed its ban on any new hog CAFOs after 25 million gallons of hog waste spilled into the New River. In 2003 Mountain City citizens formed the Watauga Watershed Alliance (WWA, formally J4CAW) in the hopes of preserving the local environment and watersheds from the impending CAFO.

WWA President Dennis Shekinah thinks the loss of industry has left the Mountain City area economically depressed and susceptible to large operations moving in. Many people are looking for work. A family that has owned land in town for a century owns Maymead Inc. along with a local gravel company that employs many people in the area. It is this family community and business stronghold of the town that Shekinah says makes it difficult for citizens to stand against the CAFO. “There is a sense among small farmers in the area that they don’t have any other choice,” he said.

In the 1980s there was a milk surplus in the U.S. and the government bought and slaughtered dairy cows in the hopes that fewer dairies would increase milk prices. But according to Tom Womack of the Tennessee Department of Agriculture (TDA), “Tennessee hasn’t seen it occur.” Very few dairymen ever returned to milking. Ever since the county has been starved for jobs and according to the 1999 Census Bureau, 22.6% of Johnson County residents live below the poverty level.

Jack Mays grew up in Mountain City and had a 75-cow dairy in 1985. Nine years later he went bankrupt. “It took 5 or 6 years to get out of debt,” Mays said. “When I started dairying it was 14 dollars for a 100 pounds of milk and when I quit it was 8 dollars a hundred. It just got so you couldn’t make it. They’ve now skinned the whole county getting ready for CAFOs.”

Mays says that although there were cows grazing on all the fields in the area when he was growing up a 690-cow dairy is different. Mays is particularly afraid that when this dairy CAFO is built, a hog or poultry CAFO will follow. “It’s a rotten deal and I don’t understand how [local commissioners and residents] can stick their head in the sand and just let this damage be done to Johnson County,” he said. “This county will be 50 years recovering, I really believe that.”

Although dairies, particularly large ones, bring in support industry to the community like the plumbers, electricians, and farmers to grow feed for the cows of the CAFO, Mays worries in the long run it will hurt the local economy because it will drive away tourists or newcomers to the area.

“Property values will plummet,” he said. “People are going to quit moving here. Down the road us electricians, plumbers, painters are going to hurt without tourism or people moving to town. These people aren’t going to pay this big money for these properties and smell cow manure and fight the flies. It’s just a devastation to Johnson County.”

The site for the CAFO is near Roan Creek, which was declared endangered by the Tennessee Department of Environmental Conservation (TDEC) and in 2005 considered the 5th most endangered river in the nation by American Rivers, a national environmental organization. The creek was put on TDECs 303d list which restricted TDEC from allowing any new pollutants into the creek. WWA is concerned that the lagoons that hold the cow manure will leak into the ground water, Roan Creek, and flush into Watauga Lake. TDEC along with the help of TDA grants CAFO permits. They did grant a permit to High Mountain Holsteins.

According to Tisha Calabrese-Benton of TDEC, “The authority to regulate CAFOs is limited to aspects of the facility that affect, or are likely to affect, waters of the state. It is the duty of the Department to scrutinize every proposed operation to be sure that it meets all requirement of the rules.” And according to TDEC, the High Mountain Holstein CAFO will not endanger the waterways. “It is our responsibility to follow and enforce the laws and regulations that govern us for the protection of human health and the environment,” she said.

University of Tennessee Dairy Specialist Kristy Hill maintains that there is no best terrain for the spread of cow manure. “Each terrain has its challenges,” she said.

“How [the manure] is applied, when it’s applied, and how much it’s applied will affect its potential to have a negative environmental impact.” Although Shekinanh of WWA counters that “even a well run CAFO still poses a huge risk for ground and public waters” because of potential flooding and leaks into near by wells and springs.

In 2004 there was hope for those opposed to the CAFO in Johnson County. Early in the year, Johnson County Commissioners passed four resolutions that declared the CAFO “not a normal agricultural activity.” The resolutions gave the county legislative power to protect the health, safety, and welfare of its citizens by prohibiting the CAFO. But the following September, the commissioners rescinded all four resolutions because state officials could not define ‘normal’ agricultural activity.

In September 2005 Johnson County Citizens Committee for Clean Air and Water (now Watauga Watershed Alliance) filed a lawsuit against the EPA because TDECs was not enforcing the Clean Water Act. The lawsuit was dismissed on grounds that the EPA has not determined that Tennessee is out of compliance and therefore the EPA has “no non-discretionary or mandatory duty to perform.”

“There would have to be a lot of damage before adequate regulations would be put in place,” said WWA lawyer Joe McCaleb, “but you’d hope that the state wouldn’t allow that to happen.”

Hill of the University of Tennessee said that although she too wants a clean environment, the cost of regulations on dairies is very high in part because the government controls the price of milk. “Expensive regulations are being forced on an already struggling industry, an industry that can’t roll their increased cost of production onto consumers,” she said.

But Steve Ferguson of WWA thinks that the regulations are not nearly enough and the EPA no longer works for the betterment of the environment. “The EPA is not the Environment Protection Agency, they are the Industrial Protection Agency,” he said. “The EPA has been shanghaied, de-toothed, sedated, and taken away.”

Nonetheless, Shekinah still has hope for their fight with the CAFO even though many people in the community have given up. “Spirits are high at WWA,” he said. “The dismissal of the lawsuit against the EPA is not the end of our fight; it simply defined the future of the fight [for] a clean productive community. We need to have more cooperation from local government and next year we will elect more proactive representatives and we will garner alliances with other community groups.”

Both Shekinah and Hill agree that Americans demand cheap food and the industry will have to accommodate that fact, even if it means sending little operations out of business. Womack of TDA said, “It’s an economic advantage to have larger herds that small dairies can’t weather. Higher production costs, low milk prices, labor demand, and an aging farm population make it tougher for small dairies to make a profit.”

Back in Shady Valley on the side of one of Gentry’s milk barns is a peeling mural of cows being milked. He sold off the last of his dairy equipment this summer and was sad to see it go. “Dairying was a good life,” he said. “Hopefully my children and grandchildren will keep the farm in the family, although I don’t expect any of them to ever milk cows again.”

Maymead Inc. and High Mountain Holsteins declined to comment for this article.