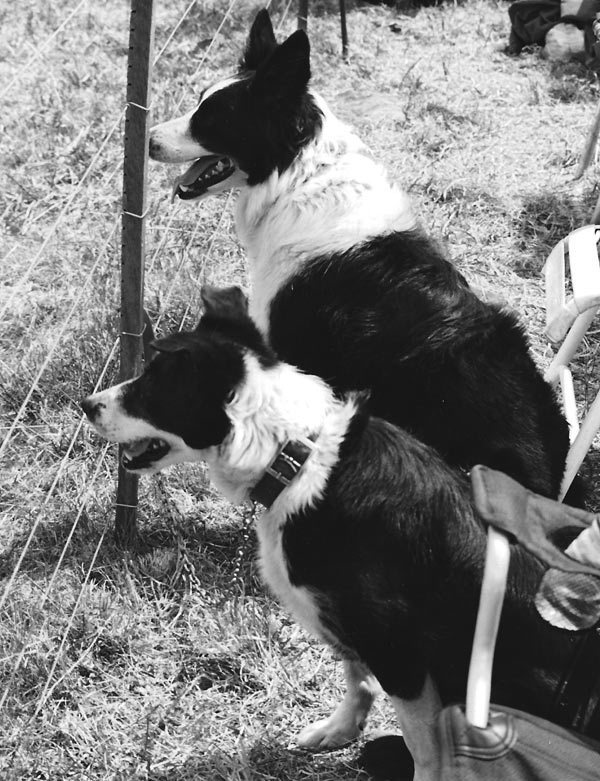 SHARP-EYED AND WAGGY-TAILED - Border Collies are renowned for their skill and agility - not to mention their enthusiasm - when it comes to herding. 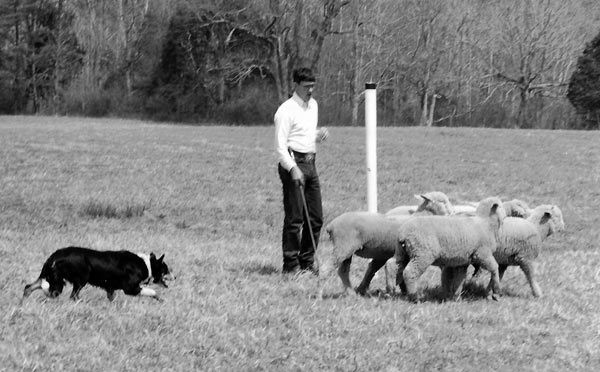 A LOVE TRIANGLE FOR THE AGES - The historic relationship between people, dogs and livestock goes back for millenia. In an age of big industrial livestock production, sheep dog enthusiasts like Colin Cleer keep this relationship alive more out of love than practicality.

images/AppalachianVoice/AVJan06/Photos/circles/Circle_SheepDog.gif
It is a windy October afternoon, the livestock trodden grass of an open field along the Cowpasture River in mountainous Bath County, Virginia, bristling slightly under the pressure of the breeze. Today Big Bend Farm, a quiet stretch of riverside pasture and woods belonging to Barbara Ray, is playing host to dozens of four-legged creatures—not livestock, but dogs from all over the state and all over the east coast. With silken coats ranging in color from blue-black and frothy white to dusky spotted browns, these high-strung border collies have come with their handlers to enjoy a sport that is more than 130 years old.

One of the event’s participants and sponsor of the annual Highland Sheep Dog Trial in April, Donald McCaig, stands nearby, his black and white border collie Luke poised obediently at his side. McCaig’s wiry gray hair pokes out from under a green cap and his solid face is at once stern and intensely interested in these animals—both sheep and dogs. He has been sponsor of Virginia’s second oldest sheep dog trial for 19 years, though he does not plan to hold the event in 2006.

“Virginia is the biggest sheep state on the East Coast,” says McCaig, “and people will travel a good distance to participate in these trials.” Sheep dog trials like the one McCaig hosts each April test both the dogs’ ability to maneuver sheep as well as the handlers’ ability to control the dogs through voice and whistle commands.

It is an age-old art that has its earliest recorded beginnings in Wales in 1873. The first sheep dog trial in the United States was held at the Chicago Exposition in 1885. McCaig says the trials were designed to help select the best breeding stock for working sheep dogs. “These are the only livestock dogs in the world,” McCaig notes of the impatient, ever willing to serve border collie. “Everywhere there’s livestock you’ll see these dogs.”

“It’s a genetic strategy,” McCaig says of the trials. “These trials are so much harder than farm work that this is where the sires and dames for breeding stock are selected. The trials are a model of what the dogs do at home, only harder.”

And the sport is becoming ever more popular, even among handlers who are not farmers themselves, as both McCaig and Ray are. “25 years ago, there were about 10 sheep dog trials in the U.S.,” says McCaig. “Today there are about 400 a year.”

Virginia hosts about 20 sheep dog trials each year, and both McCaig’s Highland trial and Ray’s event draw handlers from as far away as Michigan to compete, and a fair number of participants are established national competitors. McCaig says Virginia is home to six of the top sheep dog handlers in the country.

Among the more expert handlers in Virginia is Tom Wilson of Gordonsville. He has worked with border collies for more than 35 years. On his home farm in the foothills of the Blue Ridge, Wilson has 500 sheep and 120 cattle, providing his dogs ample opportunity to ply their trade.

“In competition, the dog’s talent and nature have to come together,” explains Wilson. “The dog can’t be too excitable. This work is very exact, and the dog has to be very obedient.”

While all sheep dog trials are a little different, the trial today at Big Bend Farm, like most trials, is designed to be nearly impossible. “It is excruciatingly difficult to win,” says McCaig. “It is deliberately made difficult so it’s on the edge of undoable. We are choosing the breeding stock for the ordinary farmer who doesn’t have time to train.”

Each handler begins with 100 points, Ray explains as the trial gets underway, and has 10 minutes to encourage his dog to maneuver four sheep around an expansive field, through three gates, and into a quadrant-shaped corral. The competitors cannot gain points, only lose them. The trial judge deducts points for every flaw, and it is of no benefit to the handler and dog to finish early. “Anything less than perfect results in a deduction of points,” Ray notes, as she watches a handler maneuver his border collie around the field with voice and whistle commands. Winning scores are typically in the 90s.

“It’s the most difficult dog training art form there is,” McCaig adds, as he watches a spry collie crouch low to the ground, eyeing his little flock, waiting for his handler’s next command. “Supposedly it takes as many years as the dogs have legs and a tail to become trial ready.”

Some trials, like the Big Bend competition, host both novice dogs and handlers as well as expert participants. Wendy Villarreal of Michigan often competes in Virginia trials with her two border collies, Breezy and Dexter. She is a relative newcomer to competition, having started working with sheep dogs eleven years ago. She started competing eight years ago.

“I fell in love with the dogs when I saw the Oatlands trial in northern Virginia,” Villarreal explains. “I think the communication between the handler and the dog is fascinating.”

McCaig says handlers can enter any dog of any age in the open trial, though he’s only seen 10 dogs that were not border collies ever compete in a sheep dog trial. “Sheep dogs make horrible pets,” he says. “They don’t have an off switch. If they don’t have this work, they get really squirrelly. They are not trained by treats and love. They’re desperate to work.”

The collies’ vast intelligence and interest in herding is evident in the intense expressions of these dogs, who sit patiently at their owners’ sides, watching the competition, as if quietly yet excitedly awaiting their turn to run. While Big Bend’s trial doesn’t draw many onlookers, McCaig’s annual trial in neighboring Highland County drew 600 spectators last year. “It surprises me,” he says, “that year after year we get more and more people who just come to watch.”

For anyone who has a dog at home that he feels he struggled just to train to sit and stay, watching a sheep dog trial can be a humbling experience. Sometimes these collies belie a hint of stubbornness at masters who will not let them take after the small herd, but mostly they run, sit, lie down, circle, and approach the sheep with willing response to the handlers’ voice and whistle directives. “You can’t force sheep to do anything,” says McCaig, as he watches a stubborn ewe decline to enter the quadrant at the end of the run. “You can only encourage them.”

The same might be said of these amazing border collies. The handlers tap into the dogs’ natural willingness to work and please. “These dogs are genetic obsessive compulsives,” notes McCaig with a laugh. “And sometimes I think it transfers to their human handlers as well.”

More information on sheep dog trials is available through the Virginia Border Collie Association, which you can visit online at www.virginiabordercollieassociation.com. You can also visit the United States Border Collie Club at www.bordercollie.org.