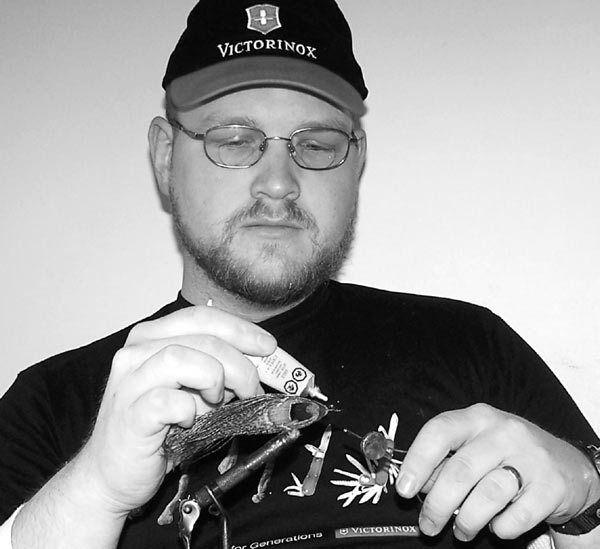 While the fish may still be biting in the winter, many anglers choose to spend the cold months preparing their tackle box for fairer weather. 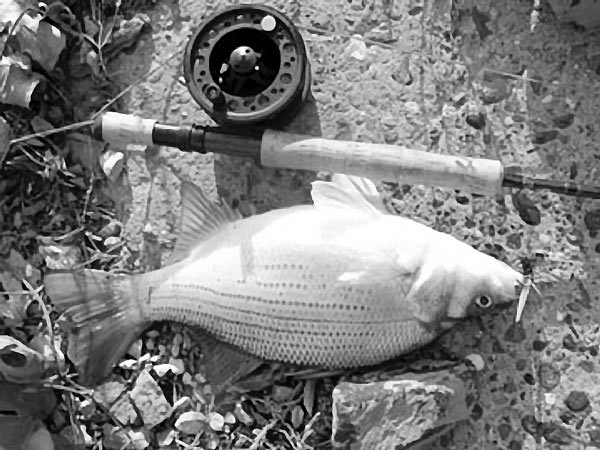 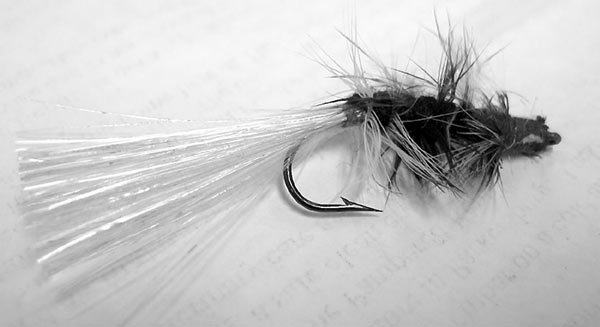 The White Bass (shown above) was caught with the author’s signature fly, the “Paynekiller,” shown below.
Photos by Dave Payne Sr.
Although fish have to eat year-round and can be caught in any season, winter sees most anglers retreating from the water.

For flyfishermen, however, it is less of a retreat than a time to regroup for the following season. It’s the time when most tie next year’s flies.

Flies are expensive. At two dollars or more per fly, a season’s worth of fishing can quickly add up. Yet, the cost of buying store-bought flies is a secondary concern for most, said Joe Webb, president of the Blennerhassett Chapter of Trout Unlimited in West Virginia.

“It adds to the whole experience. You’ve created something with your own hands that was actually good enough to fool a wild creature. After a while, you get to the point where you don’t even want to fish with store-bought flies because catching fish on your flies in so much more gratifying,” he said.

There are beginner patterns which might take a first-time tyer only minutes to learn. Foremost among those that are easy to tie, but effective, is the Green Weenie. Other patterns might take years to master, said Mike Ross, a lab technician from Huntington, W.Va.

“You only have to look at the beauty, complexity and elegance of a may fly to realize God hated fly tyers,” Ross said.

However, “You can’t put into words what it means to have a wild trout take a fly you’ve tied, but the silly smile on your face says it all,” he said.

Traditionally, fly tying has been a way to participate in fishing while cooped inside during winter months. Ross said the hypnotic, repetitive motions of fly-tying give time for contemplation and thoughts about fish.

“Sitting in front of the vice is like kneeling before a holy altar, a time for introspection in the hopes of revelations, for we believe that by our acts of contrition we might be blessed with better days on the water,” he said.

While some fly tyers spend years studying entymology and trying to perfect their representations on a hook canvas with a pallet of fur and feathers, others continue to use, or even champion, the simple designs. Brandon “Bubba” Holt, a student in Parkersburg, W.Va., is one of the latter. He uses the Green Weenie fly almost exclusively and has developed a cult following of sorts for it on the popular message boards at www.WVangler.com.

Holt promotes this fly as if he were managing a political campaign. In some ways it is just that, since many old-school purists look on it with disdain.

All Holt cares about is that it works.

“For people starting out that want to catch a whole lot of fish with relative ease, it is great,” he said. “If you don’t catch a fish by the fourth cast with a weenie, that hole doesn’t have any fish. It’s that simple.”

Tying the green weenie is simple: put a No. 10-size hook on a hook vice and wrap thread around the hook shank several times. Tie a strand of medium florescent green chenille near the hook bend, make a loop for a tail and tie the strand on again at the same spot where the end was tied. Wrap the chenille around the hook in a tight spiral until you reach the bead. Wrap the thread several times just behind the bead to hold the chenille firmly and tie off the thread.

The beads and chenille are available at any fly-tying supplier.

As Green Weenie lovers will testify, a fly does not have to be complicated to catch fish. It doesn’t always have to be well-tied; the first flies were simply red wool tied to a hook.

Even something as simple as a few strands of deer hair tied to a hook will catch fish today.

Bluegill and sunfish, fish that often consider a drowned cigarette butt a potential meal, make an excellent first quarry for the beginning flytyer.

Any kind of dry fly, a floating fly, is perfect for these fish. One fly that doesn’t float, but works well for bluegill (as well as trout) is the San Juan Worm.

You need only red thread, small red chenille and a No. 10 hook. Tie the chenille to the hook so that an inch of material extends beyond both the head and tail. Apply heat to the tip, just enough to melt them into a sharp point, but not catch on fire, for an added touch of realism.

Retrieve this fly below the surface with short jerks to mimic the way a helpless worm kicks in the water.

Don’t be nervous or shy. Whatever another flyfisherman might think of a fly you have tied is irrelevant. There is only one test your fly must pass and only one critique that matters – that of the fish.

“How does it feel to catch a fish on a fly I tied? Awesome! To me, flyfishing is about fooling a trout into a strike and when I accomplish that with my own tie, then that validates me as a fly tyer. It’s nice to have other fishermen and fly tyers say my flies are good, but in the end, the trout is the ultimate judge,” he said.
Not all flies are small, nor are trout the only gamefish that can be caught on a fly rod. Streamers, flies that represent fish, are often tied big and catch big fish, including muskellunge, pike and bass.

On a 20-degree day last November, I caught a trophy citation white bass from the Ohio River on a flyrod on a fly I designed the night before and call the Payne Killer. The fly is tied on a 1/0 and much bigger than anything one might see on a trout stream, nor is a traditional trout fishing rod and line, three-weight to five-weight heavy enough to cast it.

For Ohio River fishing, I use 9 weight flyline, which is also heavy enough for musky fishing.

The white bass was two pounds, five ounces, monster size for a white bass, and the fact I caught it on a fly I had tied, and moreover, designed, made the catch that much more satisfying.

My Danish-made Triax flyrod has handled bigger fish. It was given to me by my friend Dirk Stiebler of Bad Oldesloe, Germany, who had used the flyrod to catch several pike and a 31-inch Sea Trout in the Baltic Sea and several Pike in the eight months he owned it.

More information about fishing for Pike – the same advice will apply to muskellunge – is available at www.pikeonthefly.com.

Thousands of instructions for tying flies are available online. One excellent resource is Virtual Flybox at www.virtualflybox.com.