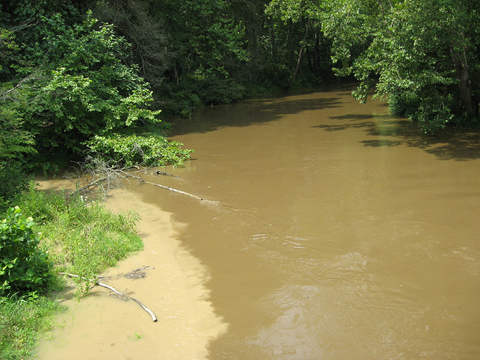 On Thursday, June 5, the U.S. District Court for the Southern District of West Virginia ruled that high levels of conductivity in water discharged from mountaintop removal mines are harmful to West Virginia streams.

The Sierra Club issued a press release that calls the ruling a “landmark decision” and quotes the district court’s decision that, “Losing diversity in aquatic life, as sensitive species are extirpated and only pollution-tolerant species survive, is akin to the canary in a coal mine. These West Virginia streams … were once thriving aquatic ecosystems.”

The ruling comes at a pivotal time for citizen action groups engaging in litigation under the Clean Water Act. The same day of the court’s ruling on conductivity, citizen groups including Appalachian Voices filed a suit in Virginia arguing that four mines owned by Red River Coal Company had failed to comply with a state-imposed Total Maximum Daily Load (TMDL) plan for the South Fork Pound River.

The South Fork Pound TMDL stipulates the level of total dissolved solids (TDS) and total suspended solids (TSS) the river can tolerate, while still protecting aquatic life. Mines that discharge into the South Fork Pound watershed are given waste load allocations (WLAs) for their contribution of TDS and TSS. Our case against Red River Coal argues that data from company water monitoring indicates that they have exceeded WLAs for the South Fork Pound River.

At a first glance, these two cases seem to be only distantly related, but with a closer look and some basic science, it becomes clear that they are actually incredibly similar.

When water has been discharged from a surface mine, it often runs through valley fills and other areas where heavy metals have been disturbed. Dr. Anthony Timpano of the Virginia Water Research Center authored a paper that explores the effects of high levels of TDS on aquatic life. Timpano states that streams impacted by coal pollution can often have a TDS greater than 2000 mg/L. A normal stream should have a TDS of less than 200 mg/L. Ions that typically contribute to high TDS levels include calcium, magnesium, sodium, potassium, chloride, bicarbonate and sulfate. Sulfate has been shown to have deadly effects on aquatic life.

Another theme present in both of these cases is the lack of state oversight and enforcement for water pollution violations in coal-impacted communities. These lawsuits were filed by citizen groups that advocate for clean water in areas where industry is often favored over local communities. The West Virginia Department of Environmental Protection and Virginia’s Department of Mines, Minerals and Energy failed to hold Alex Energy, Elk Run Coal Company, and Red River Coal Company accountable. Instead, citizens have stepped up to the job.

Appalachian Voices’ Water Quality Specialist Eric Chance hits the nail on the head, saying, “Unfortunately, it takes lawsuits like this one to get the Department of Mines, Minerals and Energy to do its job and enforce existing laws that were created to protect the health of people and streams.”

Sarah grew up in Todd, N.C., in the Blue Ridge Mountains. She graduated from Furman University in 2012 with a B.S. in Earth and Environmental Science. She is interested in environmental justice, land conservation, and improving water quality.