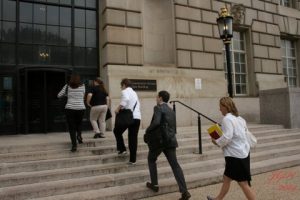 Last week, Appalachian Voices and Earthjustice brought a team of Appalachian residents to Washington, D.C., to lobby members of the U.S. House of Representatives to cosponsor the Clean Water Protection Act (H.R. 1837).

The events of this lobby week — including meetings with 24 House offices, the U.S. Environmental Protection Agency and the Office of Surface Mining Reclamation and Enforcement — paved the way for progress as we reminded our public officials that mountaintop removal is an urgent and even life-threatening issue for communities across Appalachia.

Representatives from Earthjustice also met with congressional appropriators to argue against amendments that would restrict federal agency action on mountaintop removal.

Representing five different organizations within the Alliance for Appalachia, our lobbying team sought to provide a comprehensive look at the environmental devastation and socioeconomic distress in Appalachia resulting from mountaintop removal coal mining. A representative from Statewide Organizing for Community eMpowerment (SOCM) mentioned the nearly $75 billion in annual healthcare costs attributed to coal pollution.

On the subject of unequal access to clean drinking water, one member of Kentuckians For The Commonwealth pointed out that during the national coverage of the Charleston, W.Va., chemical spill in January, very few commentators asked why 300,000 people in nine different counties shared a single water system. The answer: Local wells were already contaminated by the chemical byproducts of mountaintop removal mining.

Another member of KFTC shared her opinion from more than two decades of work in surface mining regulation that the rules and standards set by state agencies simply aren’t doing enough to protect the land and water from serious damage. Further, members of Southern Appalachian Mountain Stewards and the Coal River Mountain Watch called for federal oversight in surface mining operations in order to reduce environmental destruction and restore clean drinking water to some of the nation’s most impoverished counties and municipalities.

As a result of our lobbying efforts, five new representatives joined the Clean Water Protection Act by the end of the week, bringing the total to 91 cosponsors. These new additions to the bill were Lloyd Doggett (D-TX35), Alan Lowenthal (D-CA47), Carolyn McCarthy (D-NY4), Lucille Roybal-Allard (D-CA40), Paul Tonko (D-NY20), and Colleen Hanabusa (D-HI1). Encouraged by this success, we hope to gain even more support in the House as we continue to defend Appalachians’ right to clean water.