The permit for this former Blackjewel coal operation is now held by Jewell Valley Mining LLC, a subsidiary of Rhino Energy LLC, which declared bankruptcy in July. Mountaineer Metallurgical has applied for the permit and is awaiting a response from the Virginia Department of Mines, Minerals and Energy. Photo by Matt Hepler

On July 22, Rhino Energy joined the ever-growing roster of coal companies that have filed for bankruptcy over the past couple of years. Just like all the others, Rhino found itself insolvent with no path back to profitability in the face of mounting liabilities, vanishing mineable reserves, and a permanently diminished demand for coal.

On August 31, a federal bankruptcy court in Ohio approved the sale of eight mining permits in Virginia to a new entity called Mountaineer Metallurgical. Rhino had only just acquired these permits from Blackjewel in November 2019 following Blackjewel’s bankruptcy, making this transaction the second time in nine months these permits have changed hands due to bankruptcy.

Along with a half dozen community members living near the mines, Appalachian Voices, the nonprofit organization that publishes The Appalachian Voice, has expressed concerns to Virginia regulators that Mountaineer Metallurgical may be no more fit to operate these mines and maintain both solvency and regulatory compliance than Blackjewel or Rhino proved to be.

But despite red flags surrounding the track records of the individuals leading Mountaineer Metallurgical, the Virginia Department of Mines, Minerals and Energy has granted the company the right to operate these mines while the agency considers Mountaineer Metallurgical’s applications for transfers of the mining permits themselves. (Currently the operations are still permitted to Rhino. It is not uncommon for one company to hold a given permit while another company operates as a contractor on that permit.)

The federal Office of Surface Mining Reclamation and Enforcement (OSMRE) maintains a database — known as the Applicant Violator System — to prevent companies and individuals with outstanding or particularly egregious violations from acquiring new mining permits. But, as we can see with regards to Mountaineer Metallurgical, this system is riddled with loopholes. Coal companies often use convoluted corporate structures to shield individuals from accountability; some companies’ full management teams are not disclosed in the database; and many unabated violations on the ground are not technically considered “outstanding” for the purposes of the Applicant Violator System. Additionally, the OSMRE itself simply maintains the database, while state regulators have the authority to make determinations about permit eligibility, often resulting in lax enforcement decisions.

Examining the resumes of Mountaineer Met’s corporate officers, it appears that some of the company’s managers (or de facto managers) may meet the criteria for being “permit-blocked,” a term that refers to temporary or permanent ineligibility to operate a coal mine based on information recorded in the Applicant Violator System.

In a declaration before the court overseeing Rhino’s bankruptcy, Mountaineer Metallurgical’s Matthew McCoy identifies himself, Mark Nelson, Charles Kapp, George Brent Mickum and Mike Isabell as the company’s management team. The declaration goes on to explain that Kenneth and Jason McCoy, who are permit-blocked, will be brought on as managers at some point in the future when that is legally possible, and that the men will serve as consultants in the interim.

Each of these men, with the exceptions of Mickum and Matthew McCoy, currently or previously served in high level positions for ERP Compliant Fuels, ERP Environmental Fund, and/or Mission Coal — three related companies with extensive records of environmental violations and questionable management practices, and which are all tied to Tom Clarke, a Virginia nursing home executive turned aspiring coal baron who boasts a string of bankruptcies and shady dealings spanning several decades. 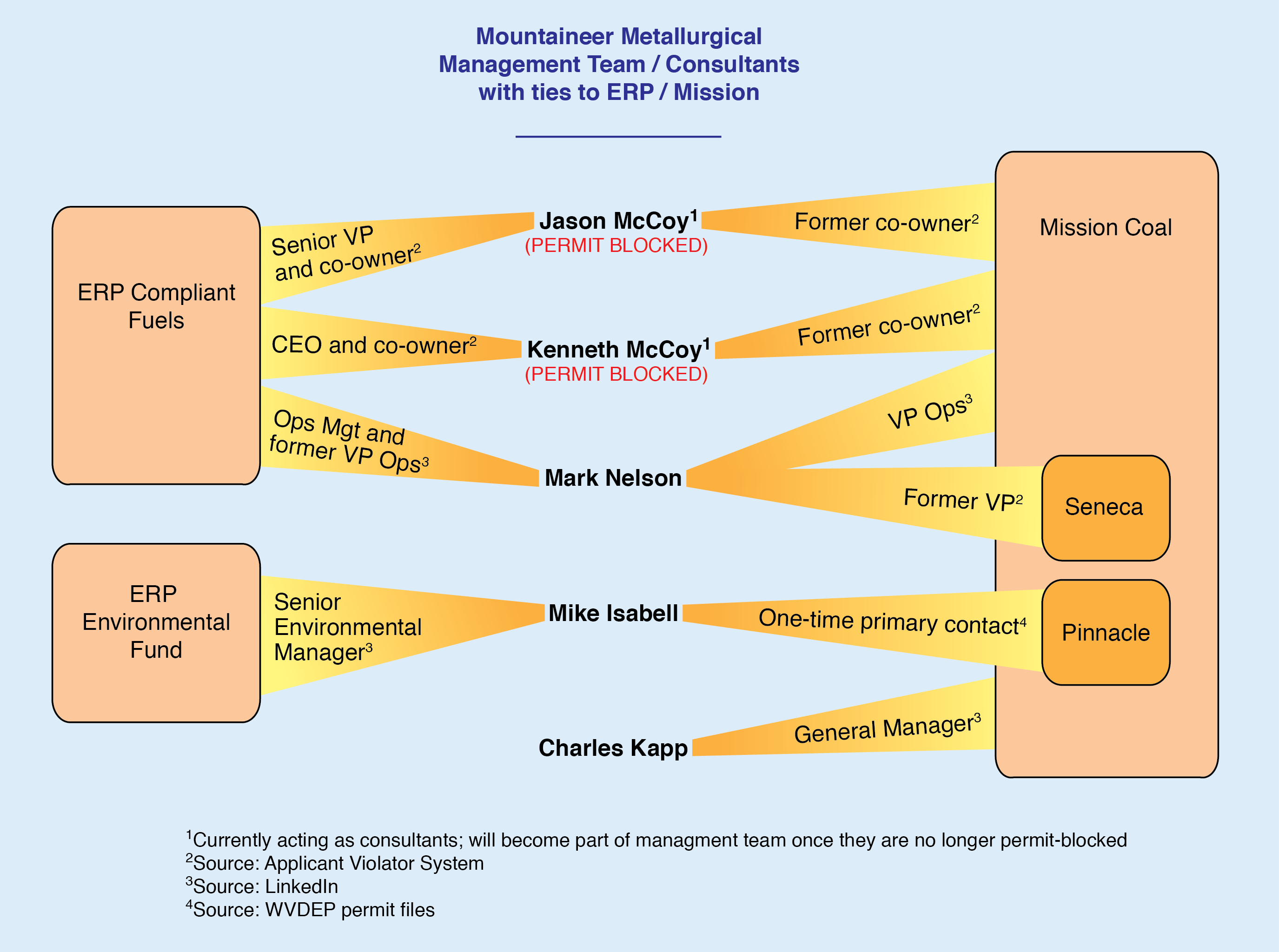 Chart displaying Mountaineer Metallurgical’s managers and consultants who have ties to other coal companies with problematic track records. Chart by Jimmy Davidson

Kenneth and Jason McCoy are co-owners of ERP Compliant Fuels through their investment firm Iron Management, and the two men have served as the company’s CEO and senior vice president, respectively, from October 2015 to the present, according to the Applicant Violator System. In that time, the four permits comprising the company’s operations were issued 94 notices of violation and 38 cessation orders (a more serious enforcement action) by the West Virginia Department of Environmental Protection.

The Applicant Violator System shows that the pair created Mission Coal in January 2018, through two other iterations of their Iron Management enterprise, along with other investors. Mission declared bankruptcy only nine months later. Since then, the company has been mired in litigation, with Kenneth and Jason McCoy accused of selling coal below market price, using company funds for personal benefit and fabricating management fees. This is according to a motion filed in November 2018 by the official committee of unsecured creditors in that case.

Mark Nelson works in “Ops Mgt” with ERP Compliant Fuels, according to his LinkedIn profile, but he is not listed as an officer for the company in the Applicant Violator System. The violator system does, however, link Nelson to Mission, by way of his role as vice president of Mission subsidiary Seneca North American Coal.

Mike Isabell is listed as a main contact on West Virginia mining permit documents for another Mission subsidiary, Pinnacle Mining Company, but this affiliation is also not recorded in the Applicant Violator System. Nor is Charles Kapp’s apparent role as general manager of Mission Coal, as is stated on Kapp’s LinkedIn profile.

Even more appalling is the record of ERP Environmental Fund, for which Mike Isabell has served as senior environmental manager since June 2019, according to his LinkedIn profile. (This association is not disclosed in the Applicant Violator System.) ERP Environmental Fund has so thoroughly neglected its obligations that on March 27, 2020, the WVDEP filed a suit asking the court to hand control of the company’s West Virginia mines to a third party to address the extensive environmental damage caused by the ERP, and to avert imminent harm posed to West Virginia residents as a result.

According to an affidavit by the deputy secretary of the WVDEP, at the time of the suit the agency had issued 160 notices of violation, 118 cessation orders, and 41 orders telling ERP Environmental Fund to show cause why permits should not be revoked. The affidavit also states that the damage caused by ERP Environmental Fund is so great that if the agency were to seize the company’s bonds and assume the cost of cleaning up the company’s mess, this would deplete the state of West Virginia’s entire special reclamation fund and likely push ERP’s bond provider, Indemnity National Insurance Company, into bankruptcy.

The Applicant Violator System lists a whopping 466 unresolved state and federal enforcement actions against ERP Environmental Fund as currently outstanding. This certainly raises concern with regards to Mike Isabell, but since Isabell is not listed as an officer with ERP Environmental Fund in the Applicant Violator System, these hundreds of open infractions do not cause Mountaineer Metallurgical to be permit-blocked.

Neither do the dozens of violations linked in the Applicant Violator System to ERP Compliant Fuels or Mission Coal, as Nelson’s affiliation with both, and Kapp’s with the latter, are likewise not recorded in the database.

Kenneth and Jason McCoy, on the other hand, do appear to be permit-blocked in the Applicant Violator System. And Matthew McCoy disclosed to the bankruptcy court that these two men are working with, and will at some point officially join, Mountaineer Metallurgical’s management team. But for now, they are not listed as officers for the company in the Applicant Violator System, and so the 54 outstanding violations against these men do not appear to count against Mountaineer Metallurgical either, in the eyes of Virginia regulators.

Appalachian Voices notified DMME of Mountaineer Metallurgical’s management’s checkered past and urged the agency to deny transfer applications to this company in a letter sent on September 24, just days before the agency granted the company operator’s status on these mines. That decision by the DMME suggests that the agency will likewise approve the permit transfers. The only other hurdle for Mountaineer Metallurgical is to secure reclamation bonds, a task that has become somewhat more arduous as surety providers grow increasingly wary of the rolling bankruptcies that characterize the coal industry today.

Appalachian Voices cannot attest to the accuracy of the information provided via LinkedIn profiles, or for that matter the Applicant Violator System itself.