Who cleans up the mess? This blog is part of a series examining how coal companies and state regulators are handling the mine reclamation problems tied to the industry’s decline. Read about some of the latest mine cleanup problems tied to the Blackjewel bankruptcy and the threat posed by Justice family mines in Virginia. 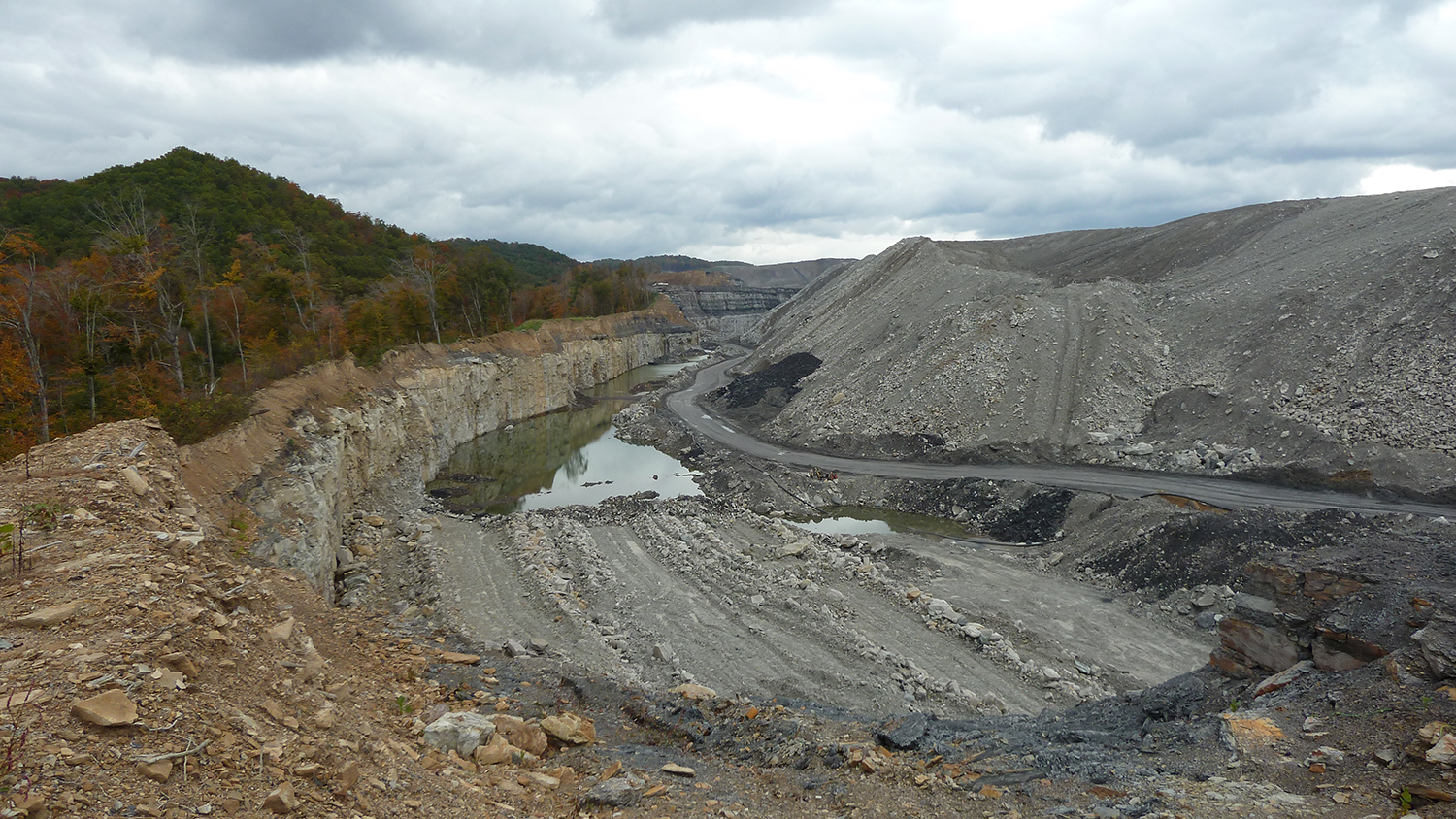 The Hobet Mine in Lincoln and Boone counties, West Virginia. Originally owned by Patriot Coal and now owned by ERP. Still not reclaimed, it has been in existence for over two decades and is one of the biggest mine complexes in the state. Photo courtesy of Appalachian Voices

On March 26, the West Virginia Department of Environmental Protection (DEP) filed a lawsuit in the Kanawha Circuit Court against ERP Environmental Fund, Inc. The latest development in a long string of coal company bankruptcies, ERP has not declared bankruptcy, but has laid off almost all employees and stopped managing its mine sites. In response, the DEP is seeking to place the coal company into what’s known as a “receivership” — appointing a third party to manage the company, so that ongoing violations and longstanding mine reclamation needs can be dealt with. Now, West Virginia must contend with ERP’s environmental violations and mines in need of cleanup. But a string of bankruptcies has been pushing the mine reclamation bonding system across the region closer to a breaking point.

ERP is an affiliate of Virginia Conservation Legacy Fund, which is owned by Virginia business man Tom Clarke. Clarke entered the coal mining industry when he acquired over 100 coal mining permits in West Virginia, along with millions in reclamation liabilities, during Patriot Coal Company’s second bankruptcy in 2015. Clarke claimed to be an environmentalist and proposed a questionable plan to reclaim the mines and purchase carbon credits to offset the coal that would be burned. Those mines are now the subject of the DEP’s lawsuit.

Though Clarke became a coal executive only five years ago, his story is already complicated. I wrote a more complete history a little over a year ago, when another of Clarke’s coal companies, Mission Coal, declared bankruptcy. But a brief synopsis would go like this: In 2014, Clarke was an outspoken critic of coal baron Jim Justice, now governor of West Virginia, due to environmental violations at Justice’s mines. By 2015, Clarke was working with Justice and purchased Patriot’s mines. Shortly after, Clarke began acquiring other mining-related assets, including other southeastern coal mines, a steel mill, an iron-ore mine, and a gold mine.

Now, with over 160 violations at ERP’s West Virginia mines, the DEP is seeking a way to clean up the mines without being forced to revoke the permits. According to court filings, the DEP has also issued 118 cessation orders and 46 show cause orders — these escalating actions are meant to compel a coal company to comply with environmental and safety regulations, through the issuance of monetary penalties and the prospect of permit revocation. But ERP has laid off its employees, made it clear to the DEP that the company has no current source of cash, and already owes $15 million to various vendors and suppliers. The company quite literally has nothing left to lose, so the threat of permit revocation is meaningless.

Meanwhile, on-the-ground impacts continue to occur. The Martinka Mine, an underground mine in Marion County, requires constant pumping to prevent the mine from discharging polluted water into the Tygart River, which is a drinking water intake for thousands of nearby residents. As the region heads into spring, increased rainfall could exacerbate problems at the Martinka Mine, as well as others.

Mining regulations attempted to prevent this type of situation from occurring, not only by setting environmental standards and the ability for mining agencies to issue fines, but also by requiring reclamation bonds. In the event of permit revocation or mine abandonment, these bonds would be forfeited to provide money for mine reclamation. Accordingly, ERP’s permits are backed by $115 million in reclamation bonds, provided by Indemnity National Insurance Company. However, according to the motion filed by DEP, neither Indemnity nor the DEP want the permits forfeited, as the true cost of reclamation for the permits could bankrupt Indemnity National Insurance Company and overwhelm the Special Reclamation Fund, West Virginia’s pool bond fund that exists to provide additional money in situations like this.

When Patriot declared bankruptcy in 2015, it transferred a number of permits that still held value to Blackhawk Mining, LLC. Patriot then proposed liquidating the remaining permits — essentially abandoning the permits. DEP determined those remaining permits would cost $230 million to reclaim, and therefore opposed liquidation. Tom Clarke then proposed that ERP, a recently formed subsidiary of Virginia Conservation Legacy Fund, take over the remaining permits. According to an affidavit from DEP Director Harold Ward, Ward met with Clarke several times regarding the proposed transfer. Ward stated that, “concerned about Mr. Clarke’s lack of experience in the industry and the adequacy of the funding for his proposed acquisition, DEP continued to oppose Patriot’s bankruptcy plan.”

Eventually, a settlement was reached between Patriot, the DEP, Virginia Conservation Legacy Fund, and Blackhawk. The settlement included several tools to attempt to ensure mine reclamation. Patriot set aside $12.5 million, to be held by DEP, which would go toward reclamation if ERP failed to reclaim the mines. Blackhawk also agreed to provide $7.5 million in reclamation work over three years on the permits acquired by Clarke’s company. ERP also agreed to provide the DEP cash that might be generated through bond release and coal sales, to be put toward reclamation.

Since that time, according to the complaint filed by DEP, ERP has operated on a shoestring budget and had continuous environmental violations. In 2018, ERP had largely run out of money and requested access to the settlement money held by DEP, which was supposed to be set aside for water treatment. The DEP agreed, but required that ERP grant the DEP first-priority security interest in assets, including land and equipment. However, ERP then went on to sign over some of that same property and equipment, worth $4.2 million, to a Washington D.C. law firm to cover debts owed.

Now, faced with few other options, the DEP has requested court orders that would bar ERP’s creditors from taking actions against ERP’s assets and would assign a special receiver to manage reclamation going forward. The DEP has proposed that Doss Engineering, a mining engineering firm based in West Virginia, be assigned as the special receiver. According to the DEP’s press release, Indemnity has agreed to provide $1 million in funding to Doss Engineering. At this point, the actual cost of reclamation is unclear. Nor is it clear where extra funding will come from if the current surety bonds and West Virginia’s pool do not cover the full cost.

ERP also has 14 mining permits in Western Kentucky. The situation with the company in that state is less clear, but there are 57 outstanding violations and 19 cessation orders issued by the Kentucky Energy and Environment Cabinet. With far fewer mines in Kentucky, ERP would strain that state’s resources less if it walked away from reclamation. But Kentucky also utilizes a pool bond, so widespread bankruptcies across multiple companies could create a funding shortfall similar to the one looming in West Virginia.

The settlement agreement the West Virginia DEP negotiated during the Patriot bankruptcy helped to ensure, but did not guarantee, sufficient funding for mine reclamation. West Virginia and other states could have done much more to fix systemic bonding issues. West Virginia, Kentucky and Virginia all utilize a pool bond, where multiple companies contribute to a pool of funds to cover mine reclamation in the event of mine abandonment. These pools were not set up to cover widespread bankruptcy of large companies. Now, West Virginia’s bonding system is being strained by the ERP failure, Kentucky’s pool bond is being strained by the Blackjewel bankruptcy, and Virginia may face similar problems if A&G, owned by the family of West Virginia Governor Jim Justice, goes bankrupt.

The ongoing Blackjewel bankruptcy has had an impact on all three states. While state regulators have been involved, none have been able to negotiate the kinds of terms the West Virginia DEP implemented during the Patriot bankruptcy. To further complicate matters, the ERP failure exacerbates the effect of the Blackjewel bankruptcy across multiple states — Indemnity National Insurance, the company that is providing roughly $115 million in reclamation bonds for ERP in West Virginia, also covers surety bonds in other states. In Kentucky, Indemnity covers $297 million, including $153 million for Blackjewel-related permits and $6.3 million for ERP permits. In Virginia, Indemnity covers $109 million, including $18 million for Blackjewel-related permits. As coal company bankruptcies continue, the fear of many local communities is being realized — bonding programs implemented by states to fulfill federal requirements will likely be insufficient to guarantee mined land reclamation.