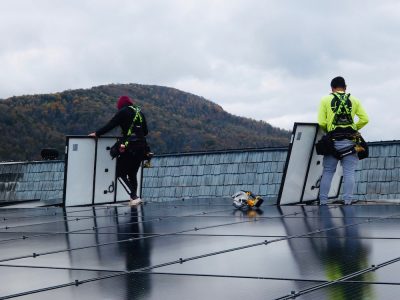 The restrictive solar policies of Appalachian Power Company have made it difficult for public schools and other government entities in Southwest Virginia to save money by switching to solar. In October, several school boards and government bodies took a step toward tearing this barrier down.

The Wise County and Tazewell County school boards voted unanimously to pass resolutions calling for fair financial mechanisms that would enable them to install solar at their schools, which would ultimately save the school systems millions of dollars over the life of the systems. Additionally, Town of Blacksburg, Carroll County Public School Board, Carroll County and Pulaski County officials sent letters to the Appalachian Power VML/VACo Steering Committee also calling for equal access to solar. The steering committee is made up of local government representatives that negotiate the utility electricity contract on behalf of all localities in Appalachian Power’s territory.

Schools across the region have pursued solar projects in recent years, including Dickenson and Wise counties, which both participated in a group purchase program conducted by the Solar Workgroup of Southwest Virginia. The Solar Workgroup is a coalition of nonprofit and community action agencies, colleges, state agencies and more, including Appalachian Voices.

However, Appalachian Power currently limits net metering for local governments and schools across its entire service territory to 3 megawatts total, and blocks power purchase agreement financing for these same customers. Net metering allows a customer to send electricity from their solar panels onto the grid, offsetting their electric bill. Under a power purchase agreement, a third-party developer owns, operates and maintains a solar system on behalf of a customer, who avoids having to pay the costs up-front.

“All that we are simply asking is that if we make the decision to perhaps move in that direction, that we can do so in the most positive environment possible,” said Wise County Public Schools Superintendent Greg Mullins.

On the sunnier side 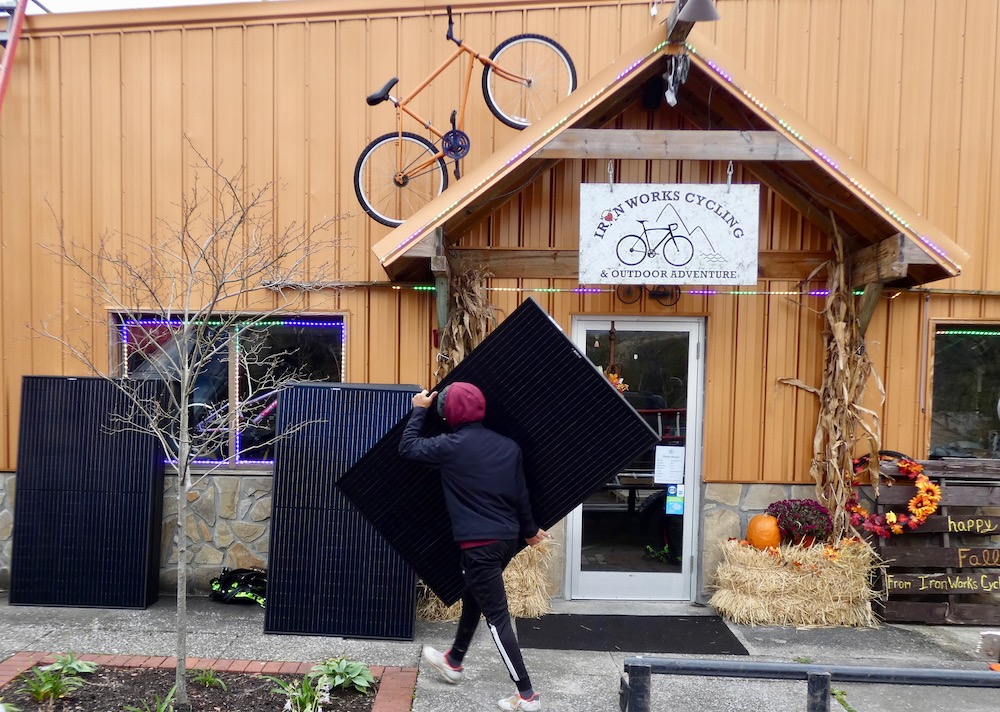 A worker with Sigora Solar carries a panel to be installed on the roof of Iron Works Cycling in Big Stone Gap, Va. Photo provided

“Iron Works is excited to be powering our business with solar energy,” said Lorenzo Rodriquez, co-owner of Iron Works Cycling. “This new system allows us to reinvest more money in our business and our community, and I look forward to the educational possibilities this provides for the area.”

This solar array is the first installed as part of the Solar Workgroup of Southwest Virginia’s commercial-scale solar group purchase programs.

As part of its mission to utilize the development of solar energy as an economic catalyst in the region, the Solar Workgroup has conducted two commercial-scale group purchase programs, including more than 4.2 megawatts of solar energy in the seven-county coalfield region. The $25,000 grant from the Solar Moonshot Program and financing options created by new state policy have opened up the solar market in Southwest Virginia.

“This is the first of many projects,” said Appalachian Voices’ Chelsea Barnes. “As a result of new legislation, we expect at least 7 megawatts of solar to be installed in the Southwest Virginia region next year.”