Lawsuits Against Mountain Valley and Atlantic Coast Pipelines Ramp Up 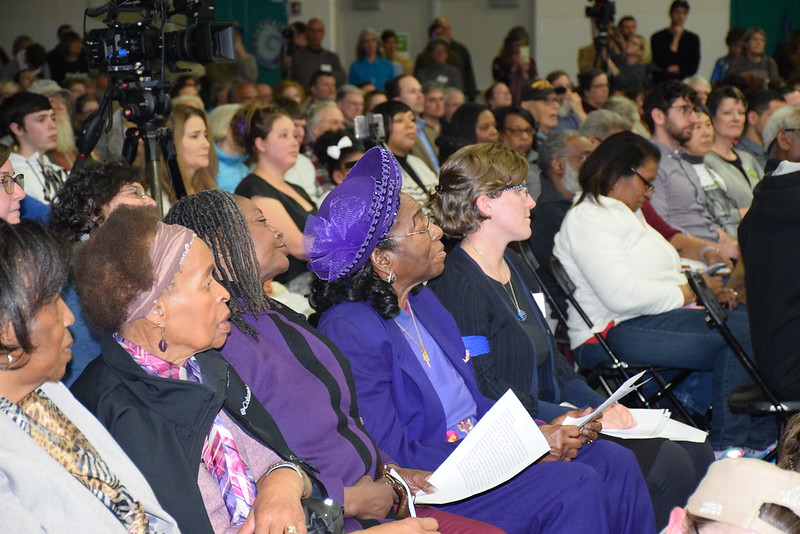 Residents of Union Hill, Va., and hundreds of allies at a 2019 rally against a proposed compressor station nearby. Photo by Cat McCue

Communities and organizations fighting the proposed Atlantic Coast Pipeline marked a momentous victory on Jan. 7. The U.S. Fourth Circuit Court of Appeals struck down a crucial air quality permit for a fracked-gas compressor station slated to be located in the predominantly African-American community of Union Hill, Va.

The court stated that when Virginia’s State Air Pollution Control Board approved the permit in 2019, it “failed to grapple with the likelihood that those living closest to the Compressor Station — an overwhelmingly minority population according to the Friends of Buckingham Survey — will be affected more than those living in other parts of the same county.”

The nonprofit law firm Southern Environmental Law Center represented several advocacy groups in the legal battle including Friends of Buckingham, which was formed by community members in 2015 when lead pipeline developer Dominion Energy bought land in the area.

“For the first time since Dominion showed up in Union Hill, I feel like we’ve been heard,” Friends of Buckingham member and Union Hill resident John Laury told SELC. “My ancestors, Freedmen and Freedwomen from Buckingham, remained here to start a new life in the years after the Civil War. They made a way from no way. Since coming back to Union Hill, we love being able to spend time outdoors on our small farm. It is a connection to the land my ancestors worked so hard to secure. The court’s decision shows that Dominion can’t ignore our community and pollute our air.”

In addition to environmental justice concerns, the court also stated that the board failed to consider electric turbines as a zero-emission alternative to gas-fired turbines. Virginia regulators must now review the compressor station’s air permit to address these problems. Dominion Energy stated that it plans to immediately resolve the issues raised by the court and submit a revised permit to the state.

This marks the eighth time that a federal court or regulator has rescinded a permit for the Atlantic Coast Pipeline since May 2018. Construction on the controversial project remained on hold as of press time in mid-February.

On Feb. 24, the U.S. Supreme Court heard oral arguments on whether the Atlantic Coast Pipeline pipeline should be allowed to burrow under the Appalachian Trail. The U.S. Fourth Circuit Court revoked the U.S. Forest Service permit in December 2018.

The Supreme Court’s 5-4 conservative majority appeared to lean towards allowing pipeline developers to cross the trail, according to The Associated Press. Chief Justice John Roberts stated that the Fourth Circuit’s decision to not allow the Appalachian Trail crossing would “erect an impermeable barrier” to pipelines, which an attorney for the environmental groups disputed.

A decision on the case is expected by June. If the Supreme Court rules in favor of the pipeline, the Forest Service would still have to address three other concerns brought up by the Fourth Circuit. This includes the court’s conclusion that the agency did not adequately consider an alternative pipeline route outside of the national forest.

Virginia Attorney General Mark Herring on Jan. 22 asked the Supreme Court to uphold the Fourth Circuit’s decision, stating that “the permitting process was rushed and slipshod and driven by [developers’] arbitrary deadlines.”

Herring disputes Dominion’s claims that the pipeline is needed to fulfill a growing demand for natural gas in Virginia and North Carolina. He points to analyses that show natural gas remaining flat or decreasing for the foreseeable future.

On Feb. 5, the Virginia House passed a bill that would require utilities to prove that natural gas infrastructure is needed and cost-effective for ratepayers before the state could approve it. It awaited a decision in a state Senate committee at press time.

Instead of seeking individual permits for each water crossing, pipeline developers can choose to obtain a blanket authorization known as a Nationwide Permit 12. Atlantic Coast and Mountain Valley pipeline developers both lost this key Clean Water Act authorization in fall 2018 due to numerous lawsuits. Mountain Valley has, however, secured exemptions from the Federal Energy Regulatory Commission to bore under select water bodies.

But the U.S. Army Corps of Engineers could be attempting to work around lawsuits challenging the Nationwide Permit 12 by reissuing it for the entire country, according to a fall 2019 notice. Although the permit is not due to be reviewed until 2022, the Army Corps cited a 2017 executive order from President Trump as reason enough to reissue it for the entire country. The order sought to end regulations that could “burden” domestic energy resources.

Each time a Nationwide Permit 12 is renewed, state agencies have the opportunity to try and change the rules to their liking during a review process, which could let them accommodate the pipelines. Although the Army Corps has yet to issue a timeline for the proposal, Mountain Valley Pipeline developers told shareholders on Jan. 24 that any problems with the permit would be resolved by spring 2020. 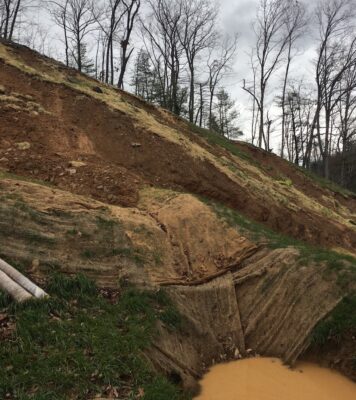 Construction on the fracked-gas Mountain Valley Pipeline remained halted at press time on Feb. 14. FERC ordered developers to stop work on Oct. 15 in response to the project losing key Endangered Species Act permits, although it allowed the company to enact any land stabilization measures that developers deemed necessary. Since then, developers requested a variance from FERC that would allow more construction, but the agency had not responded as of press time.

However, developers racked up at least 30 potential water quality violations in fall 2019, according to nonprofit environmental group Wild Virginia. The organization discovered the problems in a review of Virginia Department of Environmental Quality reports. Wild Virginia called on the VDEQ to penalize the company in a Feb. 6 letter to the agency, stating that the group had not found evidence of enforcement actions for the problems.

Mountain Valley developers agreed to pay $2.15 million to Virginia in October 2019 for more than 300 water quality violations. At the time, the state attorney general said that there would be “much more significant consequences” for any violations that occurred after Sept. 18, 2019.

“MVP is still failing to install and maintain pollution control measures as mandated,” reads a Feb. 8 Wild Virginia press release. “This behavior prolongs a disgraceful pattern of noncompliance that has been ongoing since work began on the destructive project in early 2018.”
Meanwhile, legal troubles continue to mount for Mountain Valley developers.

Three Virginia couples have challenged FERC’s use of eminent domain to seize their land for the pipeline in a lawsuit filed in January. Attorneys for the landowners are calling on a federal judge to nullify FERC’s ability to grant eminent domain certificates and declare that all certificates already issued are void.

“When it comes to eminent domain, FERC has far too much power and discretion,” said Mia Yugo, one of the landowners’ attorneys, in a Jan. 3 press release.

A tree-sit in the path of the Mountain Valley Pipeline reached its 500th day on Jan. 17. The blockade in Elliston, Va., was ongoing as of press time in mid-February.

On Jan. 30, a judge dismissed misdemeanor charges against Phillip Flagg, who chained himself to Mountain Valley construction equipment in July 2019 in Montgomery County, Va. Flagg previously spent several months in the trees at Elliston. Glenna Benjamin, a 76-year-old protester who blocked construction near the area in September, was found guilty of trespassing on Jan. 13. 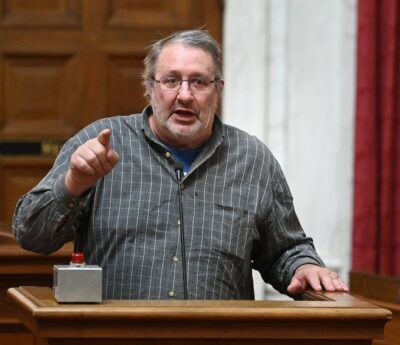 “Shame on you!” said West Virginia resident Maury Johnson to state representatives at a public hearing for a bill that would classify a variety of pipeline protests as felonies. Photo by Perry Bennett

Multiple states have enacted or are considering bills that discourage pipeline protests. On Feb. 10, the Kentucky House passed a bill that would make inhibiting operations of infrastructure including pipelines a felony punishable by up to five years in prison and a maximum $10,000 fine. H.B. 44 awaited decision in the state Senate as of press time.

In Ohio, S.B. 33 would make tampering with natural gas infrastructure a felony. Critics worry this could include temporary changes such as graffiti. The state Senate passed the bill in May 2019, and it awaited decision in a House committee at press time.

A bill moving through the West Virginia legislature would make impeding work on “critical infrastructure” such as pipeline construction a felony. H.B. 4615 currently awaits decision in the state House.

Maury Johnson with the grassroots nonprofit Protect Our Water, Heritage, Rights coalition was one of 23 West Virginians who spoke out against H.B. 4615 at a public hearing on Feb. 10.

“They did this hearing at 8:30 on a Monday morning when they knew that very few people would get there,” says Johnson, who drove several hours to attend.

“It’s another industry giveaway to advance pipelines as quickly as possible without any resistance,” he continues. “They’re gonna need a whole lot more jails.”

While FERC incorporated some considerations from last year’s public comment period, the commission ultimately decided that the pipeline’s impacts on the environment would likely be mitigated by developers. Critics of the decision — including Appalachian Voices, the publisher of this newspaper — doubt this, citing the company’s extensive track record of environmental violations.

“FERC’s conclusion that approval of MVP Southgate would result in ‘less-than-significant’ adverse environmental impacts flies in the face of the reality of Mountain Valley’s performance to date,” said Pittsylvania County resident Katie Whitehead, who lives in the path of MVP Southgate.

The N.C. Department of Environmental Quality has questioned whether Southgate is needed. NCDEQ must grant developers a Clean Water Act permit before construction could begin.

Editor’s Note: This article was updated from the print edition on Feb. 25, 2020.