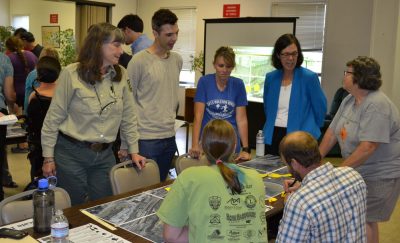 Citizens meet to discuss options and opportunities for the Norton Riverwalk proposal in Southwest Virginia.

Through the dark clouds of the Trump administration’s agenda for rolling back or killing off programs critical to the health of Appalachian communities and the environment, a bright spot has emerged.

The omnibus spending bill passed by Congress earlier this month – and signed by the president last Friday – includes $10 million for economic development projects to help communities in Southwest Virginia in need of new opportunities. Although the White House has threatened to eliminate the program that will provide these funds, the president needed to sign the bill to avoid a government shutdown. The bill will keep the government running through September 30, and Virginia will receive the entirety of the $10 million.

It’s the first time Virginia will get funding through a congressional pilot program initiated last year for cleaning up abandoned mine lands and redeveloping them for new economic activity. Under the 2016 program (modeled after the RECLAIM Act which was recently re-introduced), Congress appropriated $30 million each for Kentucky, West Virginia and Pennsylvania.

The new spending package provides an additional $25 million to those states, as well as $10 million each for Virginia, Ohio and Alabama. Rep. Morgan Griffith (R-9th), who represents far Southwest Virginia, has been an advocate of federal investment in the region. In addition, seven local government entities in Virginia’s coal counties have passed unanimous resolutions supporting such investment for mine reclamation combined with economic development, starting with Norton, the first community in the country to do so.

“We are thrilled to see this funding come to Virginia for innovative mine reclamation that will have positive local impacts. Virginia’s inclusion is a direct result of the clear message from the resolutions of support passed by local governments in far Southwest Virginia. Going forward, it will be critical to make sure those same communities have a meaningful role in determining how this money will be spent.”

Last year, Appalachian Voices partnered with Gerald Collins, a professional engineer with 30 years in the coal industry, and others to inventory abandoned mine lands in Virginia and identify 14 sites with significant economic development potential as solar facilities, recreation areas, sustainable agriculture and other types of projects. The group found that for roughly $16 million in total reclamation costs these sites could yield up to $53 million in economic return.

“This is great news for the coal counties of Southwest Virginia. The potential projects in our study would be great candidates to receive these funds. In many instances, these projects leverage the efforts that localities have already undertaken with the hopes of finding more funding in the future. It appears that the time is now, and we stand ready to assist the Commonwealth of Virginia in launching projects which will give our local economies a real shot in the arm.”

Some examples from the report, “Healing Our Land, Growing Our Future,” include: