The resilience and determination of the Appalachian region has never been more evident than now, as many in the region are working diligently to create new enterprises and jobs as they face a declining coal industry.

Local support for federal investment to aid economic development efforts in the coal regions of Kentucky, Virginia, Tennessee and West Virginia is growing quickly. Over the course of just seven months in 2015, more than two dozen local governments unanimously passed resolutions calling for a dramatic boost in federal funding.

With long-term economic data showing that coal will not rebound in any significant way, many residents remain focused on the aim of diversifying Central Appalachia’s economy. Appalachian Voices stands with them, and remains staunchly committed to helping secure federal investment in locally-driven, sustainable and forward-looking initiatives to create jobs, protect public health and transition the region’s economy.

Our focus is to secure investments to clean up old mine sites, help establish a solar industry in the region, and build wealth that stays in the communities and to attract new business to the region. (See our Southwest Virginia campaign)

Several federal programs have been directing funds to the region over the years to stimulate the economy, but three initiatives hold tremendous hope for a sustainable recovery from coal’s decline.

One of the most promising ideas that has gained keen interest from local leaders is cleaning up and then repurposing abandoned coal mines as new economic development projects such as solar facilities, sustainable agriculture, community parks, public recreation and much more. The approach would simultaneously create jobs, reduce health and environmental hazards, and help transition the region’s economy.

In response to this interest, a bipartisan bill known as the RECLAIM Act (Revitalizing the Economy of Coal Communities by Leveraging Local Activities and Investing More) was introduced in Congress in February 2016. The bill would allocate $1 billion over five years to clean up abandoned mine lands, create jobs and advance economic development in communities across the country that have historically relied on coal.. The funding would come from the expedited release of existing money in the Abandoned Mine Lands Fund, which comes from a per-ton fee on all coal mined in the U.S. 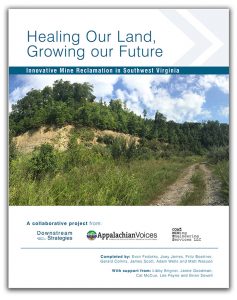 Report on repurposing abandoned mine lands in Southwest Virginia

In late March 2017, however, alternative versions of the bill were put forth in the new Congress. As introduced by Sen. Mitch McConnell (Ky.) and Rep. Rogers, the new bill would provide the same level of funding for mine reclamation, but would not require economic development or stakeholder participation for all priority sites. And another Senate version offered by Sen. Joe Manchin (W.Va.) and four others mirrors the original version.

Appalachian Voices is continuing to work with our allies to ensure economic development and stakeholder participation are part of any legislation going forward, and to secure passage of this critical legislation as soon as possible.

In 2016, we commissioned a study to demonstrate the significant potential of the RECLAIM idea.. We identified 14 abandoned mine sites in Southwest Virginia that represent the best potential for reclaiming old coal sites that could be repurposed for new economic endeavors. Our report, “Healing Our Land, Growing Our Future,” is helping raise awareness of the possibilities at hand — but much depends on securing the federal investment.

In 2015, President Obama put forward the “POWER+ Plan” to reinvest in the communities affected by the decline in coal, which gained bipartisan support from across the country.

President Trump ran on a platform of job creation and economic transformation and we press the administration to fulfill those promises and make concrete investments in the communities that need it most.

In particular, we will continue to push Washington to:

While the Obama administration’s POWER+ Plan did not ultimately get congressional approval, the White House allocated significant funds as a “down payment,” through POWER Initiative grants. As of January 2017, the Appalachian Regional Commission had invested $73 million of these funds, anticipating the money would create or retain more than 6,500 jobs, leverage an additional $132 million in investments, and prepare thousands more for jobs in technology, entrepreneurship and other sectors.

As a pilot project, Congress in 2016 authorized $90 million to be split evenly between West Virginia, Kentucky and Pennsylvania to reclaim abandoned mine lands for economic development. This funding is separate from the proposed RECLAIM Act, though it accomplishes a similar goal.

One project to be funded in part by the pilot funding is in Pennsylvania. The Ehrenfeld site poses serious environmental concerns, including acid drainage impacting the Little Conemaugh River and degraded air quality from a five-acre area of coal waste that had been burning. The steep, unstable pile creates hazardous conditions for residents of some 115 nearby homes, including one home that is only 20 feet away. The three-year project began in June 2016 and will remove 2.4 million yards of coal waste left behind from underground mining operations that lasted from 1903 to 1971.

Congress has expressed a commitment to continuing this funding in 2017. Appalachian Voices is pushing lawmakers to expand the scope of the funding for other states, including Virginia, that were not included in the original pilot to help boost any number of locally oriented economic diversification efforts.