Environmental regulations didn’t cause coal’s decline — and rollbacks won’t save it. 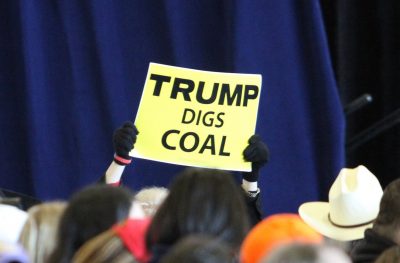 Now that he’s in office, President Trump’s promises to coal are colliding with the reality of the market forces shaping the industry’s future. Photo via Flickr, licensed under Creative Commons.

While campaigning for the presidency, Donald Trump pledged to be a friend to the coal industry. Once elected, he began to make good on that promise.

On March 28, he signed an executive order instructing the U.S. Environmental Protection Agency to unravel the Clean Power Plan, which limits the amount of carbon dioxide emissions allowed from coal-fired power plants. This rule was a cornerstone of President Obama’s climate policies and has been blamed by some for ushering in the death of coal, despite the fact that it has been held up in court and will likely never be implemented.

When signing the order, Trump surrounded himself with coal miners and industry executives.

“Today I’m taking bold action to follow through on that promise,” Trump said at the signing. “My administration is putting an end to the war on coal.”

But despite these bold declarations, government regulations have played little role in the decline of the coal industry. So, deregulation is unlikely to revive it.

A new report released by Columbia University on April 25 evaluated the causes for the rapid decline in the coal market over the past few years. The authors found that 49 percent of the decline resulted from competition from cheaper natural gas. Twenty-six percent resulted from decreased energy demand because of increased energy efficiency, and a further 18 percent of the decline can be credited to the expanding market for renewable energy.

In other words, the report concludes that 93 percent of the reason the U.S. coal market is in such a steep decline has nothing to do with government regulations that target coal, such as the Clean Power Plan.

And academics aren’t the only ones taking note of these trends.

CEOs of large electric utilities across the country have gone on record saying that they have no intention of returning to coal, despite Trump’s win.

“Our statutory duty is to produce electricity at the lowest feasible rate,” Bill Johnson, the CEO of the Tennessee Valley Authority, the nation’s largest public utility, told the Associated Press in mid-April. “And when we decided to close the coal plants, that was the math we were doing. We weren’t trying to comply with the Clean Power Plan or anything else. What’s the cheapest way to serve the customer? It turned out to be retiring those coal plants.”

Similarly, Duke Energy continues to move steadily away from coal. “We have to look through the changes of administration, the changes in politics and set our vision on where we want our company to be and what strategy we are pursuing,” said the company’s CEO Lynn Good, according to the Charlotte Business Journal. “Our strategy will continue to be to drive carbon out of our business.”

And, to give one more regional example, Appalachian Power Company’s new president, Chris Beam, said that his company didn’t have plans to expand its coal use either, despite local pressure.

Beam said his utility was focused on attracting large companies — and new customers — to the region, companies that insist on access to 100 percent renewable power.

“At the end of the day, West Virginia may not require us to be clean, but our customers are,” he said. “So if we want to bring in those jobs, and those are good jobs, those are good-paying jobs that support our universities because they hire our engineers, they have requirements now, and we have to be mindful of what our customers want.”

This trend is widespread. In early April, after Trump signed his executive order, Reuters surveyed 32 utilities operating in states that sued to block the Clean Power Plan. Only one said that the new administration’s action would extend its reliance on coal. Twenty said it would have no affect on their future plans.

Given how little sway federal policy has over the future of the U.S. coal industry, Trump’s promises to bring back mining jobs sound callous.

But Rep. John Yarmuth, D-Ky., told CNBC that such rhetoric was “one of the most cruel deceptions.”

Even coal executive Robert Murray is doubtful that mining jobs will return, and he’s told President Trump as much.

“I suggested that he temper his expectations. Those are my exact words,” Murray told The Guardian about his conversation with the president about coal jobs. “He can’t bring them back.” 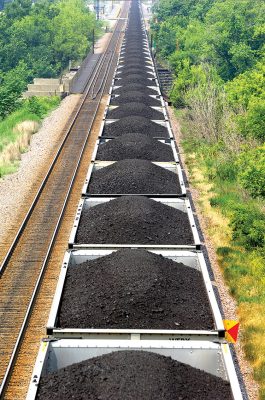 Some coal companies are pining their hopes on overseas demand — a risky bet that has backfired before. ©iStockphoto/bsauter

Most of the job loss in the mining sector isn’t due to government regulations, according to Murray, but are the result of technological advances that have reduced the need for a large labor force and, more recently, from competition from natural gas.

Yet Trump continues to promise to revive the coal industry, even while bolstering its main competitor — natural gas — in his “America First” energy policy.

In fact, according to statistics from the U.S. Labor Department, coal jobs have already dropped 8 percent since Trump took office.

On May 2, a Bloomberg article announced the triumphant return of coal, based largely on a resurgence in prices for the metallurgical coal used in steel production.

Yet any increased demand for U.S. metallurgical coal is unlikely to be long-lived, since China — the world’s leading importer — will likely return to doing business with Australia — the world’s leading exporter — once that country’s coal infrastructure is repaired following a cyclone crippled export capacity in late March.

And for anyone following the trajectory of the coal market, this hype around metallurgical coal should ring alarm bells. Last time the industry bet big on met coal, most of the nation’s largest coal companies went bankrupt as a result. And this isn’t ancient history, it happened in 2015.

During those bankruptcy proceedings, many of the biggest names in coal — Peabody, Alpha, Patriot and Walter Energy — tried to dissolve the pension and health benefits they owed their miners. In late April, the federal government stepped in to take responsibility for retired miners’ health benefits, but their pensions remain largely unfunded.

The situation mining communities face won’t improve if decision makers don’t first accept the reality at hand. As the authors of the Columbia University report wrote: “Responsible policymakers should be honest about what’s going on in the U.S. coal sector — including the causes of coal’s decline and unlikeliness of its resurgence — rather than offer false hope that the glory days can be revived,” wrote the authors of the Columbia University report.