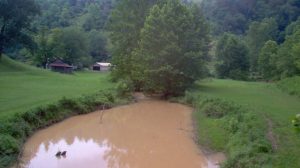 Dominion Resources wants the public to think the proposed Atlantic Coast Pipeline is a done deal. So, in a classic “fake news” move, company execs held a tele-press conference yesterday where they basically said as much.

They say a lot.

They don’t say even more.

For example, despite repeated requests from citizens groups, Dominion officials have not told the public how they’re going to control erosion and stormwater along the miles of proposed route in the mountains of West Virginia and Virginia, nor how they’re going to stabilize the numerous, incredibly steep slopes they would cross.

Nor have they said exactly how they are going to handle the excess rock and dirt that would result from blasting along 38 miles of high ridges in the two states.

Citizens groups yesterday released a report about this aspect of the proposed pipeline, finding that – based on the 125-foot necessary construction zone that the company has used consistently — such blasting could result in 247,000 dump trucks full of debris that cannot be put back in place. (And whether blasted rock and dirt can ever be restored to achieve the legally required “approximate original contour” of a mountain is another matter entirely. For your reference, see here.)

Instead of addressing this critical environmental issue, a company spokesman used the shop-worn tactic of attacking the messenger. In press reports, other officials said that only an 8-foot wide area would be excavated on the ridges. And, oh yeah, clearing for “temporary work areas.”

Meanwhile, earlier this month one of the project managers told the Highland County, Va., board of supervisors: “We feel a sandstone cap on top with a 150-foot width is nominal. We’ll have to excavate quite a bit of material.”

The bottom line is, Dominion, as the project lead on behalf of itself, Duke Energy and others, is trying to ram this pipeline through the process, especially now that it sees the door to the Federal Energy Regulatory Commission opening ever wider under the current administration.

It seems a reasonable request that all stakeholders – the companies, state and federal regulators, and public interest groups – take sufficient time and thought to fully assess a 600-mile project, that would cost $5 billion, directly affect thousands of people, and cumulatively impact many thousand more.

FERC received some 25,000 comments this year from people urging more analysis, demanding answers, and challenging whether the pipeline is even needed. See here, here, and this breaking news story from Bloomberg.

This is not a done deal.