Nearly 70 years after the first thru-hike, more hikers than ever are traveling the Appalachian Trail

A stunning sunset over the Great Smoky Mountains in Tennessee. Photo by Jonathan Riley, courtesy of the Appalachian Trail Conservancy.

The year was 1948. Earl Shaffer, a young WWII veteran from Pennsylvania, put on his worn boots, packed his U.S. Army issue rucksack, and set off alone for a roughly 2,000 mile journey from Georgia to Maine, hoping to walk off the depression that had dogged him after the war.

It’s been 69 years since Shaffer made that first documented thru-hike of the Appalachian Trail. The news that he completed the trek earned him the nickname of “The Crazy One” and raised public awareness of the trail. He later thru-hiked it two more times, first in 1965 and again in 1998, on the 50th anniversary of his first hike.

In the years since Shaffer’s hike, the number of people attempting thru-hikes has increased. After the release of the movies “Wild” and “A Walk in the Woods” in 2015, the number of registered thru-hikers rose dramatically from 1,968 in 2015 to 3,133 in 2016. The Appalachian Trail Conservancy, a nonprofit organization that protects and maintains the trail, estimates the total number of visitors to the trail at 3 million annually. 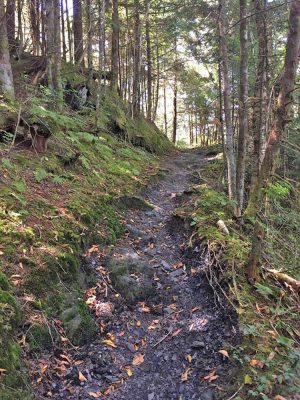 Traversing the Smoky Mountains on a thru-hike. Photo by Kaiha Bertollini

Benton MacKaye, a forester, author and conservationist who envisioned a footpath through the length of the Appalachian Mountain Range, first proposed the Appalachian Trail in 1921. Construction began soon after and was completed in 1937. The trail meanders through woodlands, meadows and windswept balds, over a course that covers roughly 2,189 miles through 14 states with nearly 500,000 feet of elevation gains and losses. It received the National Trails System Act’s first National Scenic Trail designation in 1968.

Volunteers developed and, to a large degree, continue to maintain the trail. Managing a trail the size of the AT requires a network of over 30 Appalachian Trail Clubs and half a dozen Appalachian Trail Crews in a cooperative management system that includes the National Park Service, the U.S. Forest Service, government agencies in 14 states and the Appalachian Trail Conservancy.

Even with all those folks pitching in to help, maintaining a trail with that much traffic is a challenge and the growing pains are evident. According to the Appalachian Trail Conservancy, the negative impacts of overcrowding include exceeding the capacity of outhouses and shelters, trash issues, and damage to springs, streams and vegetation.

Jo Swanson and her trail partner Bart Houck, known by their trail names of “Someday” and “Hillbilly Bart,” made the first thru-hike of the much younger, partially completed Great Eastern Trail in 2013. Swanson had previously section-hiked the AT from north to south in 2009 and 2010. She says the AT is “over-loved” and that practicing Leave No Trace principles — such as not leaving trash behind, minimizing campfire impacts and staying on the trail — and good hiker behavior can lessen the impact of high traffic on the trail. Swanson is particularly concerned about hikers going off trail to avoid the long zig-zags up a mountain. 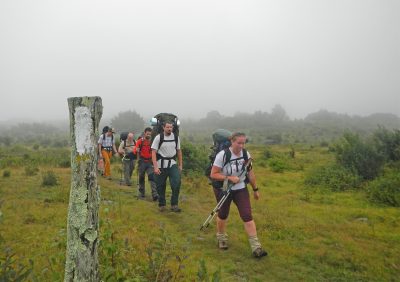 Participants in a Leave No Trace Master Educator Course learn to care for healthy landscapes while making as little impact as possible. Photo courtesy of the Appalachian Trail Conservancy

“People were cutting switchbacks and going straight up the mountain and creating these pathways for erosion,” says Swanson. “They think, well, it’s just me so it doesn’t matter if I just walk up the mountain. But with thousands of people out on a trail, it makes a huge difference.”

Not all of the impacts from increasing traffic on the trail are damaging. One mutually beneficial change is the impact the growing number of hikers and the communities along the trail have on each other. 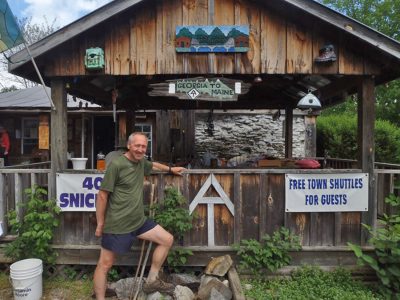 “From about the middle of March until about the third week in April, if you were to stand outside of Franklin where the AT crosses Highway 64, you’d have 50 thru-hikers a day walking across Highway 64,” Van Horn says. “Having 50 extra folks in town in bedrooms, eating at restaurants and hitting the supply stores is a good thing.”

The committee worked with the local Macon County Transit to develop a twice-daily shuttle during peak thru-hiking season that transports hikers 11 miles from the Highway 64 crossing to the town center.

Another popular Trail Community is Damascus, Va., nicknamed “Trail Town USA” and famous for its Trail Days festival. Now in its 31st year, Trail Days brings nearly 10,000 visitors to Damascus, population 800. In turn, the town spends $11,000 per day to put on the event and brings in 50 Port-a-Johns to accommodate the crowd. This year’s festival will be held May 19-21.

“It’s just an amazing event,” says Tim Williams, chairman of the Appalachian Trail Days Committee and vice mayor of the town. “It’s like a family reunion or a homecoming.”

Daniel “Spot” Codispoti has thru-hiked the AT five times. Although he forgoes the shelters for the solitude of camping in his tent alone, he says he’s noticed that the trail and shelters have been crowded in recent years, detracting from the wilderness experience. 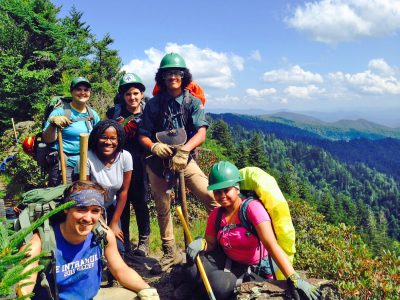 The inaugural Conservation Leadership Corps crew learned how to protect the AT and surrounding resources. Photo courtesy of Appalachian Trail Conservancy

He plans to thru-hike it again in 2017, and this time he’ll use a flip-flop strategy recommended by the trail conservancy to avoid crowds and reduce pressure on the trail. He’ll start his thru-hike in his home state of Pennsylvania and go north to Mount Katahdin, Maine, the northern terminus of the AT. Then he’ll take a bus back to Pennsylvania and go south to Springer Mountain, Ga., the southern terminus.

Besides flip-flop itineraries, the Appalachian Trail Conservancy is asking hikers who are starting from Springer Mountain to avoid leaving on the most popular departure dates: April 1, March 1, March 15, and the Spring Equinox. The organization also offers a voluntary registration program that allows hikers to plan their hike to avoid the crowds.

As the trail has become more popular over the decades, there have been some positive impacts that only come with time and growth. Besides the increased number of shelters and outhouses, trail maintenance has increased, including the visibility of the AT’s famous white blaze.

“In the ‘60s and ‘70s, and even the late ‘90s, I would get lost sometimes because there were just no white marks in certain places,” says Codispoti. “Now, there are white marks everywhere. It’s easy to follow.”

“A lot of the bogs or small creeks never had bridges,” he adds. “You could almost guarantee getting wet feet almost every day. Today, that hardly ever happens.” 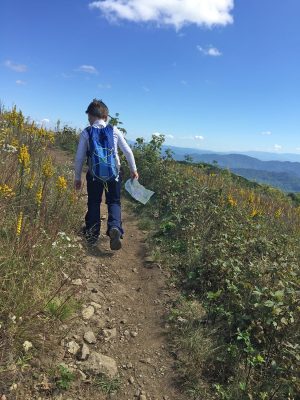 A young hiker enjoys a day out on the Max Patch Loop Trail near Asheville, N.C. Photo courtesy of the Appalachian Trail Conservancy

One thing that hasn’t increased much over the years is the crime rate on the trail. Jordan Bowman, public relations media specialist with the Appalachian Trail Conservancy, says the number of reported incidents are relatively low in comparison to a city of the same population as the AT.

A greater safety concern is illness. According to the trail conservancy’s website, there is a higher likelihood of being exposed to norovirus in an overcrowded shelter area or contracting Lyme Disease from ticks on the trail than being a victim of crime.

Codispote says what bothers him most isn’t crime.

“I guess I first noticed it in ‘11,” he says. “The amount of smartphones on the trail and the people using the technology to hike the trail, it changes the trail in a bad way for me.”

“A lot of times in the past, if I came up to a shelter or anywhere where there was a young person sitting there, they would at least say ‘Hi,’” he continues. “You’d have a talk. Many times I’ve come up on somebody and they have their head buried in their phone or they have earplugs in their ears and they just give a little wave of their hand or they acknowledge your presence. They’re not rude, but you don’t engage in any conversation. That’s a disappointment.”

Swanson thinks technology is a big part of why thru-hiking has boomed.

“It’s a lot easier for hikers to share their experiences now, sending pictures home, posting on social media and blogs,” she says. “I think that outreach makes long-distance hiking seem achievable for a lot of people.” 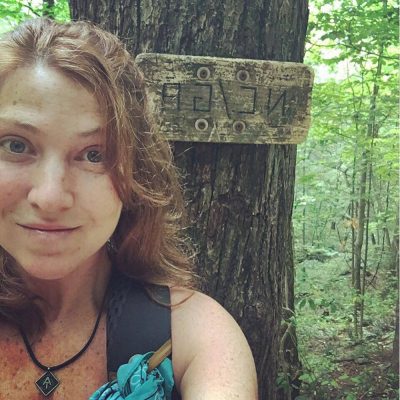 Snapping a selfie on the trail. Photo by Kaiha Bertollini

Codispoti says one important thing has stayed the same: the community of people and the good will they share along the trail.

“I think that’s one of the big reasons why I go back,” he says.

Seek and Ye Shall Find

Kaiha “Wild Card Ninja” Bertolini found that good will, along with connection and purpose, when she thru-hiked the AT in 2016. She’d never heard of the trail until she met a thru-hiker in December of 2015. She quit her job in advertising, borrowed some gear and hit the path.

“I was at a crossroads in my life,” she says. “I turned 30 and I was like, ‘I’m going to die one day and I don’t care about anything that I’m doing.’ In 2010 I was assaulted by men in the army. After that, I had a very hard time reconnecting not only with myself and my own personal strength, but also being able to see the world is still kind and good.”

“I needed to know that still existed,” Bertolini continues. “The Appalachian Trail taught me how to connect with the world again.”

Codispoti says most people who thru-hike the AT are looking for something.

“It’s just a simple path through the woods and yet it does a lot of different things for different people,” he says.

Whatever growing pains the trail may be experiencing as it enters its seventh decade, one theme remains constant. From Earl Shaffer who walked off the trauma of war as the first person to thru-hike the Appalachian Trail, to the thousands who will set out on their own treks this year, no one who makes the journey is ever the same again.

The rewards of trail life include awe-inspiring vistas, such as this one from Mount Crawford in the Smoky Mountains, top. Photo by Kaiha Bertollini