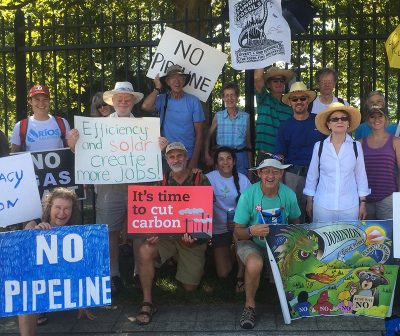 The Supreme Court determined that when the Department of Interior transferred management of the Trail to the National Park Service (many decades ago), it did not transfer the land itself, which remains the purview of the Forest Service. Therefore, the Forest Service retains authority to grant rights-of-way to gas pipelines across the trail on national forest land.

But this in no way is a greenlight for this calamitous project. The future of the Atlantic Coast Pipeline remains in very serious doubt, and Appalachian Voices will continue fighting alongside our partners and directly impacted communities every step of the way.

The pipeline still lacks multiple required permits, including permissions to build through habitat of threatened or endangered species, cross more than 1,000 water bodies in three states, and build a polluting compressor station in the African-American community of Union Hill in Buckingham, Va. In fact, some of the remaining hurdles are so high, analysts with investment firm Morgan Stanley believe the project will never be completed.

Further, the underlying project permit issued by the Federal Energy Regulatory Commission (FERC) in 2017 has been challenged by environmental groups, including Appalachian Voices, and awaits argument before a panel at the D.C. Circuit Court of Appeals. Dominion Energy and Duke Energy premised the pipeline’s application on delivering gas to meet alleged demand for electricity generation in Virginia and North Carolina, but their case has crumbled completely.

Actual demand simply does not match utilities’ lofty projections from past years. Moreover, because the cost of transporting gas on a new pipeline is far greater than purchasing gas from existing pipelines, the Atlantic Coast Pipeline would substantially increase the monthly electric bills of Dominion and Duke customers.

With recent policies adopted by both Virginia and North Carolina to meet future demand with clean energy, the magnitude of the Atlantic Coast Pipeline boondoggle simply grows. The Virginia Clean Economy Act mandates that Dominion’s Virginia territory be powered by 100% clean energy by 2045. In North Carolina, Governor Roy Cooper signed Executive Order 80 calling for a 40 percent reduction in greenhouse gas emissions statewide (below 2005 levels) by 2025. In addition, Duke Energy recently published a “Net Zero Carbon” plan that would achieve a 95 percent reduction in carbon dioxide emissions by 2050. These goals are simply incompatible with the Atlantic Coast Pipeline project.

Virginia and North Carolina residents will not accept a project that produces greenhouse gas emissions equivalent to 20 new coal-fired power plants, targets environmental justice communities, takes land from unwilling property owners and wreaks havoc on water resources. We will fight until Dominion and Duke abandon ship on the ACP.