Activists and partners gather for the Hands Across the Appalachia Trail event. Photo by Russell Chisholm

On Saturday, May 28, more than 65 community members, advocates and allies fighting the Mountain Valley Pipeline celebrated the treasured Appalachian Trail — and the return of the annual “Hands Across the Appalachian Trail” event. Held near the proposed Mountain Valley Pipeline trail crossing in beautiful Pearisburg in Giles County, Virginia, the return of this in-person celebratory event was welcomed after the 2021 hiatus and a preceding 2020 virtual version.

Hands Across the Appalachian Trail was a collaborative effort to celebrate the AT and show solidarity with all fighting and experiencing harm from MVP. The event organizers were Protect our Water, Heritage, Rights Coalition (POWHR), Appalachian Voices, Preserve Monroe, Preserve Giles, Summers County Residents Against the Pipeline, Sierra Club Piedmont Group and Sierra Club New River Valley Group. 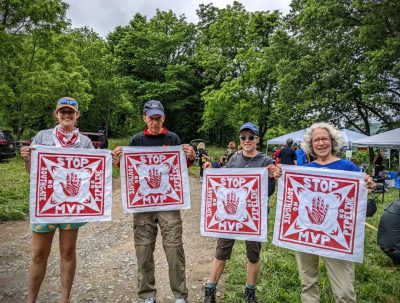 The membership of Sierra Club New River Valley Group includes many directly impacted by the pipeline who have taken part in the 9-years-long fight. The group, and its chair, Rick Shingles, helped set the party-like atmosphere for the Hands event by generously providing pizza for all attendees. That atmosphere continued as talented musicians played bluegrass and old-time tunes, attendees worked to build an art project together, and everyone got a chance to visit and celebrate the beauty of the area.

Dozens of trail hikers passing through the area joined in on the fun, enjoying refreshments and hearing from the day’s speakers: Kirk Bowers of the Sierra Club Piedmont Group; Nan Gray, a SWVA-based soil scientist; Callie Coffey, a youth climate justice leader; Maury Johnson of Preserve Monroe and Russell Chisholm, co-chair of POWHR, who served as emcee. 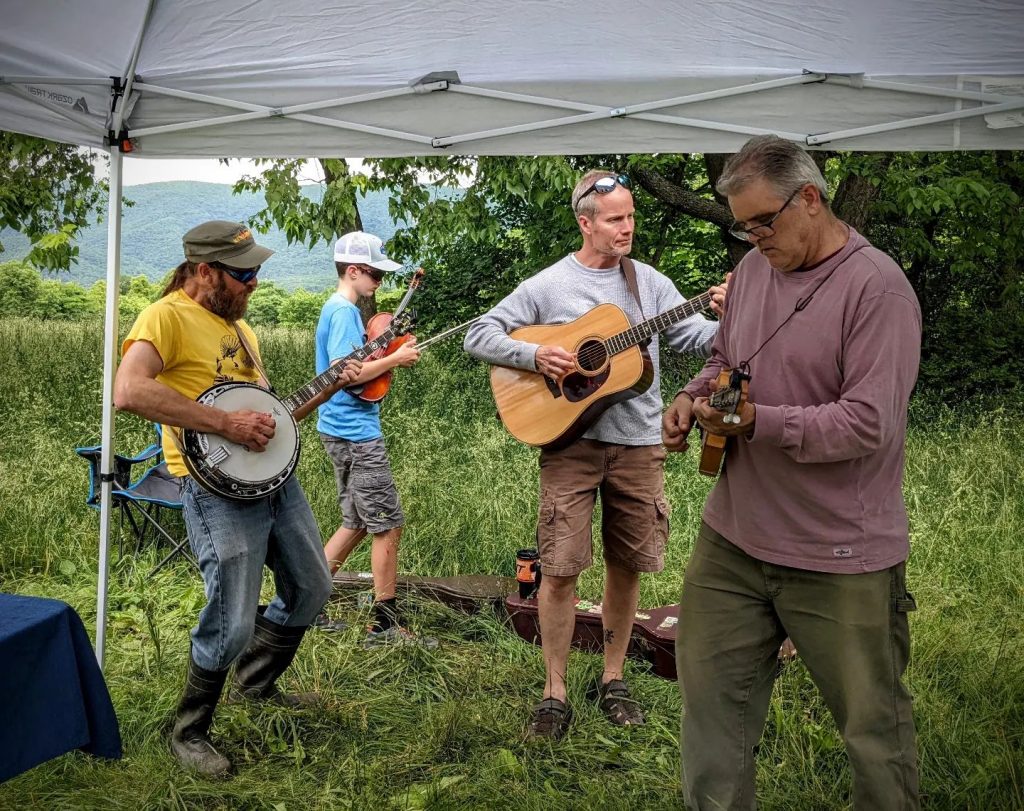 The Hands event was also a featured stop by the Walk for Appalachia’s Future, a two-week event amplifying the Appalachian region’s fights for environmental justice and renewable energy. Starting May 24 in Ireland, West Virginia, and concluding on Saturday, June 4, with a youth-led rally in Richmond, Virginia, the walk connected community members and allies to highlight environmental damages caused by the fossil fuel industry, the need to cancel the MVP and the interconnected fights for justice occurring across the region. Walkers crossed Peters Mountain during the morning, arriving at the Hands event to an enthusiastic greeting! 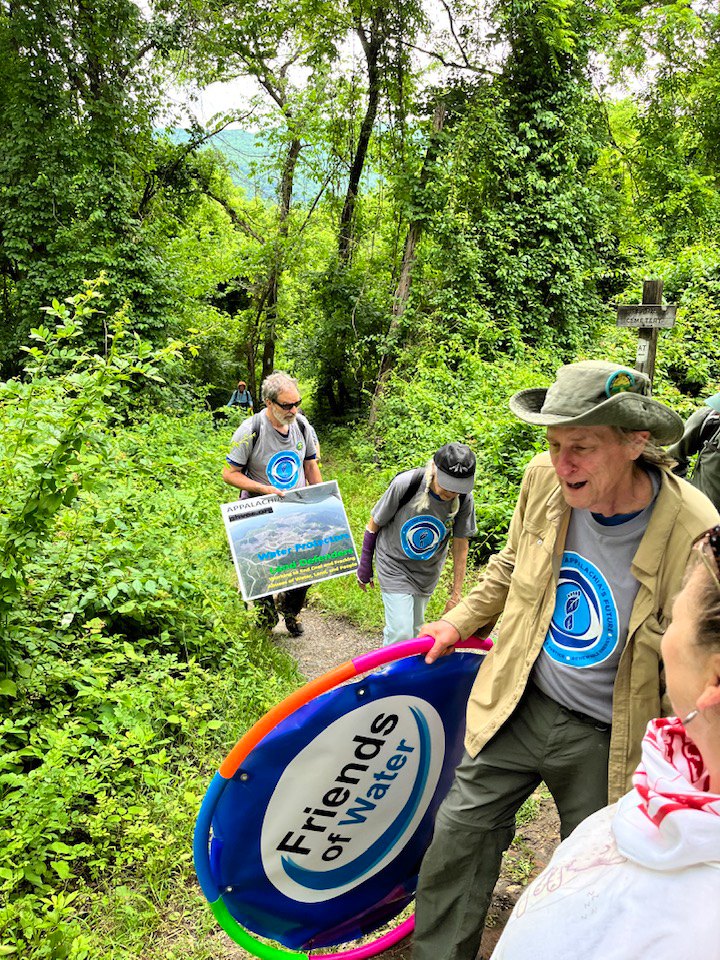 The day featured many powerful testimonies from those fighting the project. Longtime organizer of the event Kirk Bowers shared his personal connection to the Appalachian Trail.

“The Appalachian Trail truly connects human spirit with nature, if you allow it into your
soul,” Bowers said. “It serves as a church with hallowed, sacred grounds preserving the majesty of nature for all to enjoy. It is a symbol of Appalachian culture that runs deep in my veins.
We must ensure that its natural beauty and cultural heritage will be preserved and
enjoyed for centuries to come.” 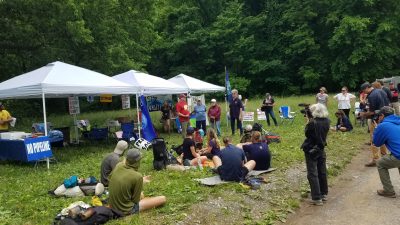 The spirit of community-connectedness felt that day was palpable — and the appreciation for the treasure that is the Appalachian Trail brought new audiences into the fight to protect it and to stop the ruinous Mountain Valley Pipeline.

We remain deeply thankful for everyone who continues to support the communities impacted by this extractive, harmful fossil fuel project. Appalachian Voices remains in solidarity with those impacted by Mountain Valley Pipeline, and we will continue to fight until the project is canceled. 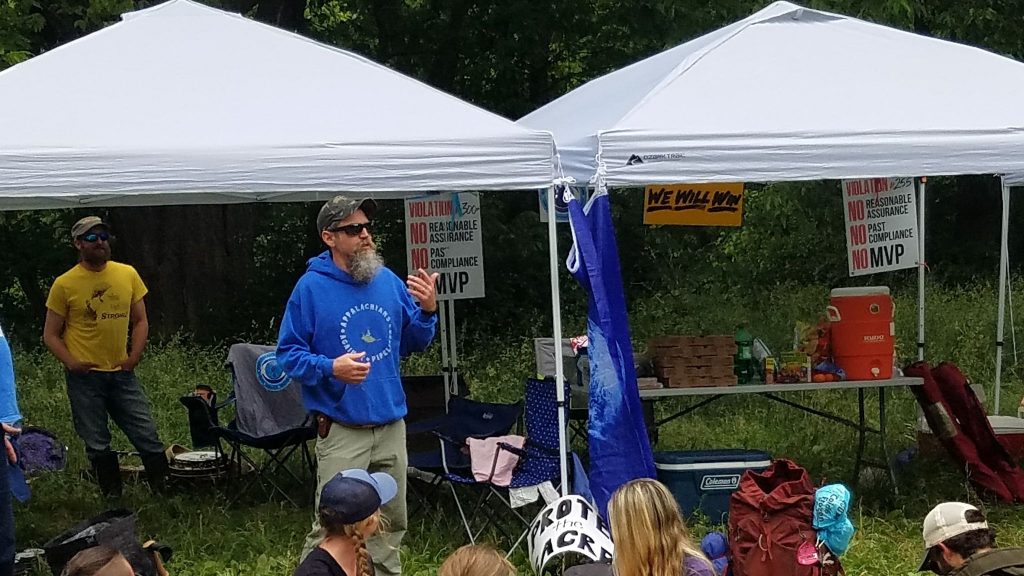 Russell Chisholm speaks at Hands Across the Appalachian Trail 2022. Photo by Appalachian Voices