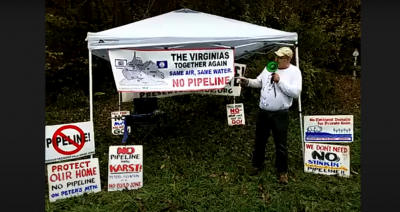 Community members, environmental groups and others who value the Appalachian Trail gathered online today to celebrate the fifth annual “Hands Across the Appalachian Trail.” The event featured residents of Pearisburg, in Giles County, Va., near where the AT is threatened by construction of the fracked-gas Mountain Valley Pipeline. The event included live music from local musicians and video messages and images from supporters along the trail’s 2,190-mile length from Georgia to Maine.

The Zoom event (watch it on YouTube here) drew more than 50 people, who heard about ways to protect and preserve the treasured scenic trail. Russell Chisholm of POWHR (Protect our Water, Heritage, Rights) and Maury Johnson of Preserve Monroe spoke live from at the AT crossing in Giles County. 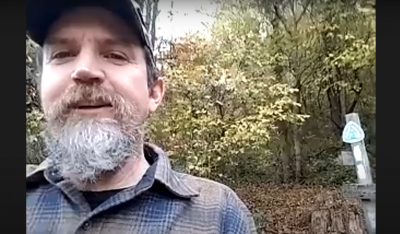 Russell Chisholm, co-chair of POWHR, speaks at the Appalachian Trail marker in Pearisburg, Va., during the “Hands Across the AT 2020” event.

“What a beautiful tribute to the Appalachian Trail to see so many come together creatively and collectively to protect sacred spaces and the planet we share,” Chisholm said. “We can and will take action from wherever we are to defend what we love.”

“For six long years the people of Virginia and West Virginia have been fighting an unnecessary fracked-gas pipeline,” said Johnson. “One of the central places of this fight is around the destruction these companies want to impose on the Appalachian National Scenic Trail, part of the National Park System. This is the most famous footpath in the world, but it seems like the government agencies who are charged with protecting it have forgotten their mandate. It appears the government won’t protect the AT through this area, so it’s left up to the citizens from across the U.S. and world to step up. That is what today’s event was, a celebration of this unique trail and a call to action to stand up for the AT against the MVP, and other destruction to special places across the country.”

The event featured calls to protect and preserve the Appalachian Trail, and to prevent any potential harm to the trail’s iconic viewsheds in southern West Virginia and Southwest Virginia. Attendees saw video messages filmed along the trail, including from Virginia Delegate Wendy Gooditis, Desiree Shelley Flores of Mothers Out Front, and Becky Crabtree of Monroe County, W.Va. The work of volunteers, community groups, partner organizations, legal advocates and others that has resulted in delays and stop work orders on the MVP project and protected the trail thus far was highlighted.

Event organizers encouraged viewers to send comments to the U.S. Forest Service, which is taking public comment through November 9 on its proposal to change 11 of its environmental rules governing old-growth forests, scenic viewsheds and soil health on the Jefferson National Forest in Virginia to accommodate the for-profit company behind the MVP. They also encouraged viewers to support the efforts of POWHR and Mountain Valley Watch.