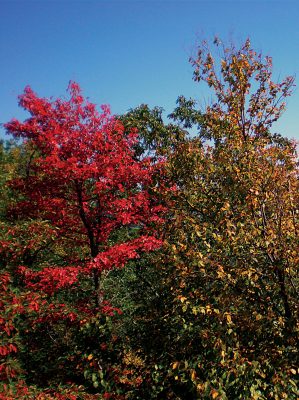 The Appalachian Trail winds its way from Georgia to Maine, over mountains that harbor rich and diverse ecosystems. Besides being a much-loved natural scenic trail for hiking and backpacking enthusiasts, the AT provides a vital, 2,200-mile corridor for wildlife that thrives in its protected habitats through 11 degrees of temperate zone latitude and 6,500 feet of elevation variations. It also connects other protected state and federal lands.

The high volume of traffic on the AT and the length of its contiguous habitats make it ideal for studying how phenology, the seasonal life cycle phases of plants and animals, is related to climate. The A.T. Seasons project does that, while engaging volunteers in hands-on citizen science.

According to Paul Super, science coordinator at the Great Smoky Mountains National Park’s Appalachian Highlands Science Learning Center at Purchase Knob, the National Park Service proposed the partnership as a way to use the Appalachian Trail for monitoring phenology.

Observations are collected through Nature’s Notebook, an app developed by the USA National Phenology Network that enables citizen scientists to submit phenology observations. Observations can be made on two dozen species, such as when red maple tree buds emerge, mayapples bloom, eastern tent caterpillar tents are seen or the song of the black-throated green warbler is heard.

“USA NPN was established in 2007 mainly because back then, the Intergovernmental Panel on Climate Change recognized that phenology, which is the timing of seasonal events in plants and animals, is one of the easiest ways to get a sense of how plants and animals or ecosystems are responding to environmental conditions that are variable or changing,” says National Phenology Network Assistant Director Theresa Crimmins.

“The A.T. Seasons project is really that exact same project but with a smaller subset of plants and animals, because they’re representative of what folks would see all along the Appalachian Trail.”

Hundreds of citizen science volunteers exponentially increase the amount of data that can be gathered. That data is important for scientists determining whether phenological phases in plants and animals are occurring at different times in response to changes in the climate.

According to Super, “They are indeed showing a warming, an earlier spring.” Besides contributing to science, volunteers may find their experiences in the A.T. Seasons project enriches their lives in unexpected ways, Super points out.

“A lot of our volunteers mention just enjoying getting to know individual trees and seeing them repeatedly, either visiting monthly or bimonthly,” he says. “Typically, when we’re out in the woods, we don’t see the trees for the forest.”

Super is intrigued by the variation in how different individuals within some species respond to the same environmental conditions.

“Here at my office at Purchase Knob, there are a number of yellow buckeyes in our phenology plot,” he explains. “Half of them behave one way and half of them seem to behave another way. You’ll have half of them burst their buds and start to grow their leaves, and then in a little bit the other half start to do that. So it’s a little odd and surprising to see that. We think of them as just trees or as just yellow buckeye, and yet there’s something else going on here.”

Super encourages folks to get involved and get to know a few trees or other species of their choice. Volunteers can join the project as casual mobile app observers, trained observers or partner groups.

More information and instructions for joining the project can be found on the Nature’s Notebook website or by attending trainings in the Great Smoky Mountains National Park. Learn more at atseasons.usanpn.org. — By Lorelei Goff 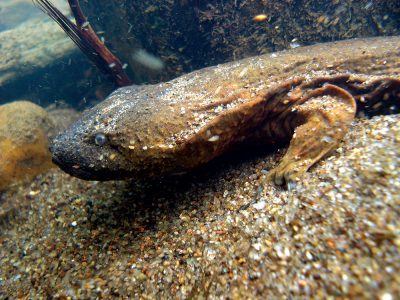 A project by Wild South to photograph and document stream sedimentation in Western North Carolina waterways will get underway in early 2019. Volunteers will use drones, kites and balloons to obtain aerial photographs in the hopes of saving habitat for the hellbender salamander — a task made harder by the amphibian’s bad reputation.

“They’re one of those species that people used to just hate,” says Wild South Conservation Biologist Morgan Harris. “They got the name hellbender because they thought they looked like something that crawled out of hell. There were myths that they were venomous, poisonous and ate all the trout in the streams.”

Even though these myths aren’t true, hellbenders are listed as a species of special concern in North Carolina. Wild South wants to keep them off the endangered list by slowing the destruction of their nesting sites.

Sedimentation from eroding stream banks stripped of trees and shrubs moves downstream and covers the hellbenders’ nesting rocks, making the habitat unusable for these salamanders and a number of other species. Volunteers with the project will take photos after it rains in the hopes of capturing large plumes of mud washing down tributaries into rivers. Harris will then take what he hopes will be compelling evidence to landowners.

“The main goal is to get landowners to talk to me so that I can help them figure out what they can do to either restore their stream or enhance their stream bank,” Harris says. “Hopefully this project will provide captivating images that will really help people understand what’s happening.”

Get involved at tinyurl.com/wnc-sedimentation. — By Lorelei Goff