The Science and Synergy of Trailbuilding

Peter Barr loves his job. Who wouldn’t love to get paid to hike?

Barr is the trails and recreational lands coordinator for the Carolina Mountain Land Conservancy, an organization that preserves land and protects natural areas from development. He designs, builds, maintains and promotes trails on the conservancy’s land in Henderson and Transylvania counties in North Carolina, as well as parts of the surrounding counties. According to Barr, trailbuilding has changed significantly over the last decade or two.

Trails used to be located mainly on old logging roads, game trails or walked-in paths that weren’t designed for heavy outdoor recreation use and often resulted in ecological damage. Steep trails were prone to soil erosion. And hikers, bikers and horses widened the trail and trampled vegetation when trying to avoid areas where standing water accumulated during wet conditions. Because it’s unlikely the damage can be completely arrested or restored, instead of repairing old trails they are often rerouted and built sustainably. 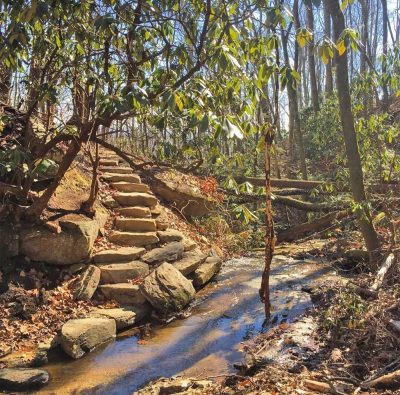 Stairways, when built sustainably, add to the durability and beauty of a trail. Photo courtesy of Carolina Mountain Land Conservancy

“Trails can cost up to several hundreds of thousands of dollars, and they’re now starting to be seen as facilities, like a playground or campground, because they’re highly engineered and there’s science behind them,” Barr explains.

Physical sustainability considers how long the trail will last and the amount of maintenance it will require. Water management is a big concern, so Barr designs slight but constant changes in elevation into the trail. That prevents water from gathering momentum over long stretches and washing away soil.

Another strategy, called curvilinear design, creates constant curves that slightly change direction while following the terrain of the landscape. By cooperating with the features of the land this way, water is naturally shed from the trail because it prefers to follow a straight line.

“Even if the distance is only a mile in a straight line, we’ll often times utilize a trail that may take up to three miles to keep that grade low enough to be sustainable,” Barr explains. “Both of these features, the rolling trail with grade reversals and the curvilinear design, they actually make for a more interesting and enjoyable user experience, too. When you’re kind of going up and down constantly, just a tiny little bit, and you’re curving through the forest, it appears more natural.”

Additionally, an almost imperceptible slope toward the outside of the trail across the direction of travel directs water away. Trail armoring, a labor-intensive method to create a more durable walking surface, uses rocks or hand-crushed gravel to minimize damage in portions of trails near streams or areas that tend to naturally hold water.

While physical sustainability manages water and erosion, social sustainability uses psychology — knowing and embracing what the user will most likely want to do — to manage the behavior of trail users and protect the landscape. 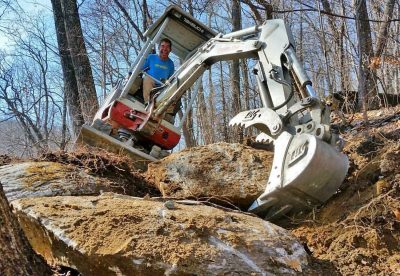 “Sometimes the trails are multi-use, for hikers and bikers and equestrians,” says Barr. “So in the design, you want to give each user the experience they’re looking for while also maintaining the integrity of the sustainable trail principles. I design mountain bike trails often times for the experience, because mountain bikers like a trail that’s fun to ride and is very dynamic.”

Balancing the motivations of trail users requires a bit of give and take. These preservation efforts form the third trail goal, ecological sustainability.

“We’re building a trail at Young’s Mountain in Rutherford County, N.C., right now, and also another mountain called Weed Patch Mountain,” says Barr. “Those two trails traverse a very rocky landscape where we know there to be the presence of green salamanders, a rare species. The trails visit some of the rocky outcroppings to provide scenery for the user and a view, but avoids other rock outcroppings [to protect green salamander habitat]. It’s a means of concentrating the impact.”

According to Barr, there can be great synergy between trailbuilding and conservation, as well as good science.

Besides constructing trails on their own property, Carolina Mountain Land Conservancy constructs trails on property owned by partner organizations and agencies, and also on private land with public trail easements.

The decision to build is usually driven by the goal of linking two or more existing trails together, or connecting a protected property in one place to a protected property in another. Making it happen requires cooperation among all involved, including donors from public and private sectors. Trails are the catalyst for that synergy. 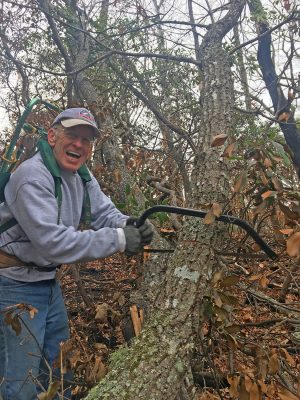 When it became evident that a trail route Barr was scouting would have to go around a cliff on private property, the conservancy sought a donation of the land from the owner for an easement granting a perpetual public right-of-way for the use of that trail. The landowner saw the value of a publicly accessible trail on the already conserved land and agreed.

“Conservation will support trails … and [a trail] also makes conservation more attractive to funders,” says Barr. “If we’re protecting a piece of land and we let the funders know that it’s likely to have a public access and trails component, that particular land protection project becomes more attractive and more desirable to fund. On the flip side, land with trails on them have a greater sense of urgency to protect the land surrounding that public access.“

Synergy is vital in the construction process as well, which can involve professional contractors, volunteers and the Youth Conservation Corps — a program that employs 15 to 18-year-olds through the U.S. Forest Service, the National Park Service and Fish and Wildlife Service. Crews use machines, including mini-excavators as small as two-and-a-half-feet wide, and hand tools.

“Sometimes that’s entirely by machine,” Barr says. “Sometimes that’s entirely by hand. Sometimes it’s a combination, where we’ll have the mini-excavator do the digging, heavy lifting and moving of rock, but then we’ll have a hand crew come behind to finish the trail by compacting the tread, cutting the vegetation, cutting the roots, outsloping the trail, and getting it to the point that a user could walk on it.”

However serene and carefree the trail experience may feel, creating those simple paths through the woods is more complex than meets the eye.

The Appalachian Trail Conservancy coordinates six trail crews and 31 trail clubs. The crews take on large-scale trail rehabilitation and construction while trail clubs handle much of the day-to-day maintenance. Other organizations that help maintain trails in the region include the U.S. Forest Service and nonprofit groups The Wilderness Society and the Southern Appalachian Wilderness Stewards.

Chris Robey, author of this story, signed up as a SAWS crew member while he was still in college. He’ll serve as a crew leader during his fourth season this year. Each season, which runs from mid-May to mid-August, begins with two weeks of training about tools, land stewardship and Leave No Trace outdoor conservation ethics. Robey calls it a “blitzkrieg introduction” to what seasonal trail crew life is like. Then the work begins.

“On the very first day of the hitch, you’ll backpack in four to five miles carrying almost 100 pounds of gear on your back, in addition to tools,” Robey says. “The work doesn’t stop until almost when you go to bed at night. It continues like that for the entire hitch.”

“You get to know each other really well,” he says. “You have inside jokes. You get to spend your time with very passionate people.”

Working on a trail crew isn’t without danger. Robey tells the story of getting caught in a sudden thunderstorm out on a trail. The crew ditched their tools and hunkered down. Robey saw a blinding flash of lightning and heard a whipping sound, like something crashing through the trees above him, as lightning struck about 50 feet away.

That didn’t stop Robey from going back. He says the benefits far outweigh the risks.
“At day’s end you have a real sense of what you accomplished,” he says. “You can see the immediate and physical results of all the toil that you put in that day. But more importantly, you’re having an actual impact that’s going to last long after you’ve stepped foot out of that area.”