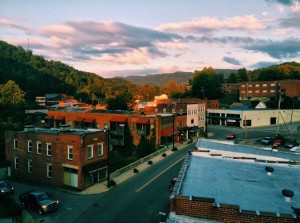 Local newspapers in Kentucky have helped expose environmental regulators’ lax treatment of industry. But Kentucky’s politicians and agencies aren’t shy in revealing whose interests they truly serve either. Photo of downtown Whitesburg, Ky.

Earlier this year, former Kentucky state Rep. Keith Hall was convicted of bribing a state mine inspector while the Kentucky Energy and Environment Cabinet looked the other way. It was only after the Lexington Herald-Leader revealed the bribery through an open records request that the FBI began an investigation.

As Tom Loftus of the Courier-Journal writes, “The proposed settlement in the case against Childers Oil Co. contained a sweeping confidentiality clause in which cabinet officials agreed to seal the settlement and ‘forever remain silent at all times and places and under all circumstances’ regarding all aspects of the settlement — even the existence of the settlement itself.”

The Courier-Journal, and subsequently the public, only found out about the agreement because a judge was required to reject it since it had not been signed by the cabinet’s lawyer.

The lawsuit stems from a February 2011 incident in which Childers Oil Company, owned by Whitesburg businessman Don Childers, leaked diesel fuel into the North Fork of the Kentucky River. The fuel made it into the city’s water supply, triggering a three-day water advisory. Many residents were not immediately notified of the chemical’s presence in the water supply. Businesses and restaurants were critically impacted by the leak.

As a resident of Whitesburg with a vested interest in seeing my community transition to a sustainable economy independent of the region’s collapsing coal industry, this is especially troubling. This month two restaurants and a moonshine distillery opened their doors in our community. It isn’t hard to see how incidents like the 2011 diesel spill and future water advisories — they occur with frightening regularity here — make it hard for institutions to do business.

But even more importantly is what this says about the agencies that are supposed to be looking out for our health and safety. As my colleague Evan Smith told the Courier-Journal:

“The most important danger that comes from this is not what’s actually in the water, it’s the public perception that you can’t trust what comes out of your pipe and what the government is doing to protect the water. And when you’ve got confidential settlements that look like sweetheart deals, it further erodes the public’s trust in our government’s process and ability for protecting our drinking water.”

This point was driven home at a recent public hearing in Lexington on the proposed Stream Protection Rule. I listened in amazement as state Rep. Jim Gooch decried the rule — which is aimed at cutting down on the amount of mining waste dumped into streams — as pointless and unnecessary because, according to Gooch, “the biggest threat to water quality in eastern Kentucky is straight piping.”

By “straight piping,” Gooch is referring to the act of running a sewage line directly from a house to a creek, rather than a municipal sewage system or septic tank. This is very common in topographically rugged and economically distressed areas like eastern Kentucky.

And Gooch wasn’t the only one blaming Kentuckians for their water quality problems. Multiple politicians at this hearing claimed that the “trash and litter problem” was a greater threat to the region’s streams than industrial pollution.

This isn’t particularly surprising. Misleading rhetoric about the “true threats” to ecological and human health gets peddled every time new regulations threaten the coal industry’s bottom line. What’s truly egregious here is that Jim Gooch is the chair of the House Natural Resources and Environment Committee. His comments display a shocking disconnect from what’s actually going on on the ground in eastern Kentucky.

While it is true that straight piping is a significant threat to water quality in eastern Kentucky, it’s dangerous to assume that phenomena like straight piping and litter, as opposed to diesel spills and mining pollution, are entirely separate issues. Separating them out and assigning them arbitrary prioritization conveniently diverts attention away from the issue at hand. The need to address one problem in no way diminishes the need to address the other.

But these diversion tactics are quite lucrative. A follow-up investigation by the Courier-Journal revealed that Don Childers, a registered Republican, and others affiliated with Childers Oil Co. donated a combined $4,000 to the Kentucky Democratic Party while Gov. Steve Beshear’s administration was negotiating its secret settlement with the company.

Sadly, whether it’s agreeing to secret settlement deals over diesel spills or blaming Kentucky citizens for their water quality problems, these politicians and the agencies they oversee reveal whose interests they truly serve: those of the fossil fuel industry.

The public comment period for the draft Stream Protection Rule ends on Oct. 26. Click here to add your voice.