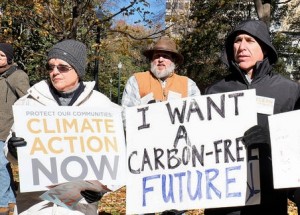 Virginia has a tremendous opportunity to meet its Clean Power Plan goals by expanding clean energy. But it is critical for Virginians to engage as the state develops its compliance plan.

In a commentary in Capitol Connections magazine out this week, U.S. Sen. Tim Kaine of Virginia characterizes the job of meeting new climate change pollution reduction goals this way: “In 1962, President Kennedy challenged our nation to go the moon by 1969. If America can get to the moon in 7 years, emitting one-third less air pollution in 15 years is surely within our grasp.”

A major goal of Appalachian Voices’ and our partners’ in recent years has been to set Virginia on the track toward a safe, reliable and affordable energy future, which has meant working hard to shake our state out of the status quo. Virginia has never had a binding state renewable energy standard, and advocates have long stressed the need for both utility-owned and non-utility projects to harness clean power on a large scale.

So where does the U.S. Environmental Protection Agency’s Clean Power Plan put Virginia? The rule represents the first requirement for fighting climate change by cutting pollution from power plants. If we use it well, the Clean Power Plan can incentivize energy efficiency programs and drive growth in solar — two ways to ensure a more secure grid and shrink bills for electric customers. But there are possible pitfalls too.

One way in which a national plan aiming for a 32 percent reduction of carbon pollution from power plants helps Virginia is by the signal it sends. It’s a further indication as to the direction the market is going. There’s a wrinkle, however, that has some renewable energy advocates worried, and it’s very relevant in Virginia: the role of new natural gas-fired power plants.

One reason for concern about possible increased gas use in Virginia is that our state’s emissions target is fairly easy to achieve. Though one wouldn’t know it from the histrionics of some politicians who oppose the standards. In a troubling development that threatens to derail Virginia’s compliance process, some state legislators are using dire-sounding warnings about electricity reliability and costs — the same red herring arguments that surfaced last year — to attempt to take away the McAuliffe administration’s authority to implement a state plan. Some insist on General Assembly approval of Virginia’s implementation plan.

The adverse effects if Virginia dramatically increases its use of natural gas are clear: higher demand for a fuel with a lifecycle that’s harmful to communities and dangerous to the environment, from the risks to water from fracking, to the impacts of dirty pipelines, to the methane released during production and transportation. More investments in a fossil fuel source are also bound to diminish the incentive for utilities to incorporate renewable energy projects into their plans. Think of how much solar power Virginia could build for the same price as 8,000 megawatts worth of new natural gas plants.

When it comes to the cost of electricity, a report by Public Citizen shows that the Clean Power Plan can cut Virginians’ electricity bills by between 7.7 and 8.4 percent by 2030, and that greater reductions are possible when well-designed energy efficiency programs are launched — programs that will also boost the economy by creating outsource-proof jobs.

Unfortunately, these affordability conclusions are in spite of and not because of Virginia’s enactment of a so-called “rate freeze” law, which is apparent in two major ways: the “freeze” goes into effect now and expires in 2020, and it turns out that the law creates a rate floor rather than a rate ceiling by blocking increases to base rates but not increases to cover infrastructure costs (which are the exact kind of costs that would ostensibly result from the need to comply with a pollution rule.)

That action is an example of why it will be so critical for Virginians to engage during this upcoming 2016 legislative session. We can press our elected officials to take steps that advance a vision of safe, affordable and reliable energy if we all take the time to participate.

Stay connected and watch for updates as we support the McAuliffe administration’s role in setting Virginia’s compliance plan, and if you have not yet provided a comment to officials about our state’s approach to the Clean Power Plan, do so here or via ghg@deq.virginia.gov by the Oct. 13 deadline.