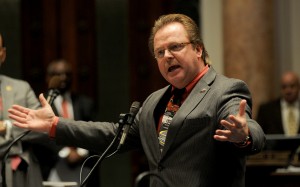 A striking case of corruption related to mine inspections in Kentucky led to the recent criminal conviction of former Democratic state representative Keith Hall. But questions remain about how deep the conspiracy goes. Photo from LRC (Ky.) Public Information.

In June 2013, mine operator and Kentucky state representative Keith Hall went to the Kentucky Energy and Environment Cabinet with a complaint.

Kelly Shortridge, a mine inspector with the Division of Mine Enforcement and Reclamation in Pikeville, had been soliciting Hall for bribes to ignore violations on Hall’s Pike County surface mines.

Hall told two cabinet officials that he had already paid Shortridge “a small fortune,” and that the mine inspector “liked the Benjamins.” A report was drawn up, forwarded to the cabinet’s investigator general and Secretary Len Peters, and went nowhere.

The FBI began investigating the matter when the Lexington Herald-Leader published Hall’s complaint report through an open records request. In June, Hall was found guilty of bribing Shortridge to ignore Hall’s safety and environmental violations.

During the trial, the bureau submitted evidence that strongly suggests Keith Hall was not the only operator paying Kelly Shortridge. Shortridge himself has admitted to taking bribes from other Pike County operators.

So how deep does the conspiracy go? That’s the question many are asking in the wake of Hall’s trial. The Herald-Leader published a recent editorial that pointed out the familiar territory here:

This is not the first time questions have arisen about the Pikeville office of the Division of Mine Reclamation and Enforcement where Shortridge, an inspector for 24 years, worked.

Other Pikeville-based inspectors allowed a surface mine (not owned by Hall) to operate without a permit for 18 months, until July 2010, when rain dislodged the unreclaimed mountain and flooded out about 80 families. One of the inspectors retired a month later.

Remember, too, that the division went years without penalizing coal companies for filing bogus water pollution reports by copying and pasting the same data, month after month.

This falsified water pollution data was only discovered after a coalition of environmental and citizen groups including Appalachian Voices discovered water monitoring reports that the department had neglected to review for over three years. The fact that the FBI had to find out about Hall’s allegations by reading the newspaper – and not through the cabinet itself – reveals a similar pattern of negligence.

How committed is the cabinet to enforcing Kentucky’s environmental and safety regulations around mining? The answer may lie in the phenomenally small salary that the state was paying Shortridge at the time of his 2014 resignation: $45,160 a year.

This may seem like an insignificant detail, but it speaks volumes about how our regulatory systems function, what they prioritize, and what motivates the individuals who operate within them. Shortridge was using his small salary, in addition to the bribes he was taking from Hall and others, to pay for his wife’s medical bills. It’s impossible to speculate about his personal character, but it does seem clear that he was responding to a specific set of material conditions in a way that most individuals on that kind of salary – and in that kind of position – very likely would.

Without much incentive to enforce existing regulations, and knowing that it pays more to cozy up to the industry than to fight it, we really must ask: how many other Kelly Shortridges are out there? This doesn’t seem like an unreasonable question to ask of a regulatory system that, at best, lacks the political capital and material resources to enforce violations, and, at worst, is overseen by the very mine operators it’s supposed to be regulating. (Before being voted out of office in 2014, Keith Hall was the vice chairman of the House Natural Resources Committee.)

Finally, Keith Hall’s remark that Kelly Shortridge “liked the Benjamins” – an incredibly condescending statement from a man who once appropriated his own county’s coal severance tax to the benefit of one of his companies – is revelatory. It hints that there are boundaries to what is and what isn’t acceptable within relationships between the coal industry and the state: Shortridge was getting ambitious; his greed was somehow different than Hall’s. Keep in mind that this was confessed to two cabinet officials, mob-style, as if Shortridge was breaking a set of established rules. Hall needed Shortridge until he didn’t, and then sold him down the river when he became an annoyance.

As the Herald-Leader editorial notes, “This should be a moment of truth, but history tells us not to expect an aggressive self-examination of the state agency’s love affair with the coal industry.”