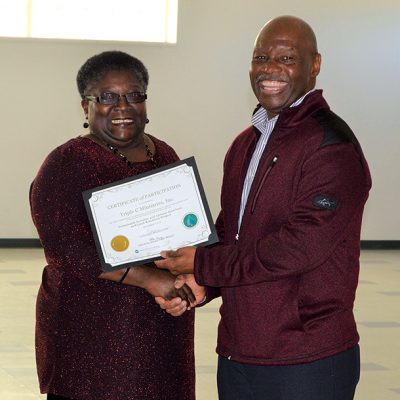 Alton Perry of the Sustainable Forestry and Land Retention Project presents an award to Cynthia Fannell of Triple C Ministries in recognition of the group’s forest management plan. Photo courtesy of SFLRP

“Members must be at the center of every activity we do on a daily basis,” Roanoke Electric Cooperative CEO Curt Wynn told CoLab Radio in 2016.

At the center of Roanoke’s member empowerment efforts is their annual series of Straight Talk Community Forums, which over 400 members attend each year to share ideas and feedback with the co-op’s leaders. Additionally, many members take part in the Action Committee for Rural Electrification, a nationwide grassroots political action committee that backs political candidates who support electric cooperatives. Nearly 7 percent of the average household’s income in Roanoke Electric’s service area is spent on energy costs, more than double the national average energy burden of 3 percent.

To help their members reduce their electric bills, in 2013 Roanoke began to develop their Smart Energy Savings programs, which include wifi-enabled thermostats and smart water heater controls. Additionally, in 2015 they launched an on-bill energy efficiency finance program, Upgrade to $ave.

Upgrade to $ave allows members to make energy efficiency improvements to their home, such as weatherization or more efficient heating and cooling systems, with no upfront costs. The resident then repays the cost of the improvements to the co-op through a new charge on their bill, which is more than offset by the amount they save because of the improvements. Over 400 member-owners have upgraded their homes and are now reaping an average savings of $58 per month through Upgrade to $ave.


Through this, Roanoke has invested more than $4 million back into the community. Additional projects focused on member concerns include a community solar energy program, expanded high-speed internet access and a workforce training program for energy efficiency contractors.

To address falling rates of land ownership in the area, particularly among African-American landowners, in 2013 Roanoke launched the Sustainable Forestry and African American Land Retention program in cooperation with the USDA’s Natural Resources Conservation Service. This program provides resources for landowners to manage their forests more sustainably and develop strategies for sustained family generational wealth.

More than two-thirds of Roanoke’s board of directors is black, representing the demographics of the majority African-American area. Additionally, CEO Curtis Wynn, hired in 1997, is the first black CEO of an electric co-op in the country.

“I must say as the chief operating officer of the company that I am very proud of how we can celebrate different thoughts, different opinions, and different backgrounds,” says Chief Operating Officer Marshall Cherry. “I think it really has done a lot of good for our organization and helps us to be able to really reach out to a mass of people because we have different perspectives coming out of our employee base.” — By Kennedy Kavanaugh