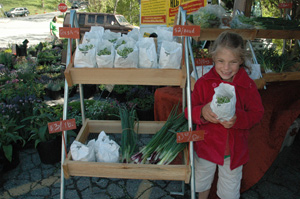 Stroll through any farmer’s market and you’ll find a riot of color, taste, and sensation.

And, quite likely, crowds of consumers.

Farmers markets are the most visible sign of rapid change in agriculture. For consumers it means healthier choices, better tasting vegetables and a new relationship with the farmers. For farmers, it means more income, more opportunities for young farmers and better environmental practices.

And according to the Farmers Market Coalition, the number of farmers markets in the U.S. has doubled in the past 10 years, topping 5,000.

“It’s exploded in a way that’s really kind of astounding,” said Charlie Jackson, director of the Appalachian Sustainable Agriculture Project (ASAP) in Asheville, N.C. “When we started to focus on ‘local’ as a market it was a brand new concept. Now it’s far exceeded what we could have imagined.”

The idea of striking a balance between urban and rural life is not entirely new to America. Benjamin Franklin, for example, was concerned about a benign balance between city and country, according to historians.

Thomas Jefferson favored the idea of independent “yeoman” farmers as the backbone of democracy. Others, like Henry Thoreau and Ralph Waldo Emerson extolled the virtues of rural life in the mid 19th century.

During the early 20th century, the Country Life movement envisioned nature-centered education as helping to slow down the problems of urbanization. It was backed by President Teddy Roosevelt and others in the early 1900s.

Through the 1930s and 40s, the idea of helping small farmers animated most political discussions about agriculture. At the same time, food needs were increasingly met by large scale agriculture, and the proportion of farmers in the population dropped from one-third in Teddy Roosevelt’s day to less than two percent of the population today.

An early reaction to industrial ag- riculture involved new concepts about sustainable farming. British, German and American agronomists worried about soil depletion and overuse of synthetic chemicals and fertilizers. The term organic farming was coined in1940 by Walter James from the idea of the farm itself as a living organism. And the concern over the environmental impact of pesticides was heightened in the 1960s with the publication of Silent Spring by Rachel Carson.

The “back to the land” movement of the 1970s saw a modest resurgence of interest in farming and rural life. And the “slow food” reaction to fast-food franchises in the 1990s, along with the recent emergence of lcoal food activists like Michael Pollan, have made a dramatic impact. Pollan’s bestselling “Omnivore’s Dilemma” of 2006 described agribusiness as having lost touch with natural cycles, and advocated old and new farming methods to make agriculture sustainable.

Organic food is healthier, according to a May 2010, report by the President’s Panel on Cancer, which recommended that consumers seek out foods that are grown without carcinogenic pesticides and herbicides. Some 1,400 pesticides have been registered for use in the US, many of which are known carcinogens.

Organic and local foods tend to be somewhat more expensive, and organic methods mean somewhat lower crop yields, but the disadvantages are offset by higher productivity per unit of land, often with ten times the dollar output per acre than large farms, according to Food First/Institute for Food and Development Policy. The trend may be seen in the sharp upswing in the number of small and micro-sized farms, from 580,000 to 700,000 out of a national total of 2.2 million in the past decade.

Large farms have also cre- ated large environmental prob- lems that are external costs of industrial agriculture. David Kirby, in the April 2010 book Animal Factory, notes that the volume of domestic animal waste is 100 times that of hu- mans in the U.S., and that con- centrated in confined animal farming operations (CAFOs), the waste is causing fish kills and deadly human diseases.

Farming in Appalachia is somewhat different from the rest of the nation. Despite the economic challenges, there seems to be a Faulknerian quality of endurance among Appalachian farmers.

Appalachian farms have an average size of 152 acres – about one-third of the U.S. average, and regional land in cultivation has dropped 36 percent in the past 35 years, compared to the national average of 16 percent, according to a paper by Dale Colyer of West Virginia University.

But the Appalachian region is in a different—and potentially better—position for catching the wave of the local foods movement.

Dennis Dove, who earned a PhD in agronomy and worked at Virginia Tech in the 1980s, found to his surprise that many old agricultural practices and heirloom varieties were still being cultivated in Appalachia.

“I’d go into the hollows and coves of the coalfields and find varieties [of vegetables] that haven’t been seen in years and years,” he said. People still passed on knowledge of farming to their children, and while most small farms needed some other income source, the basic pattern of agriculture had not been altered as it had been elsewhere.

“It was all still here,” Dove said.

Dove and partner Tenley Weaver began organizing the Good Food Good People marketing co-op in 1997, a Floyd, Va.-based project to bring produce from local farms to restaurants and farm markets, and one that was able to work with both older and younger farmers.

“I realized we had to promote and pre- serve local and regional agriculture from the tractor-trailer situation,” Dove said. By demonstrating the success of an organic and local farm marketing co-op, Dove feels he is doing more for farming than he could have done as an agricultural researcher. Today, organizing is easier, Dove and Weaver say, because digital communications technology in rural areas is now helping to link farmers and consumers.

Another model of innovation is the Gray- son County Landcare co-op, based in Independence, Va. The group was formed by five local farmers committed to returning more money to the local community, and sparked by Jerry Moles, a PhD who started the Landcare movement in Australia and Sri Lanka.

What resulted was Grayson Natural Foods, which specializes in grass-fed beef and “hair” sheep that are marketed without hormones, antibiotics or animal byproducts in the feed.

“That same thing happens with consumers buying local, not depending on supermarkets, and having more control.”

Since local operations are smaller in scale, this also cuts down on environmental damage from factory farming of livestock, he notes.

The SSAWG is one of several nonprofit organizations in the Appalachian region taking on an educational role. The organization holds annual conferences where farmers talk about their local and organic operations, about marketing issues, and about legal and infrastructure problems. Other non-profits include Southern Sustainable Agriculture Research and Education.

Universities are also beginning to offer more programs in sustainable agriculture. Notable are new sustainable agriculture programs at Appalachian State University, the University of Tennessee Knoxville and North Carolina A & T. Two regional colleges have used farming as a way to help support education since their founding over a century ago: Warren Wilson in North Carolina, and Berea College in Kentucky.

Berea operates a 500-acre working farm, and about 90 acres are in the process of transitioning to certified organic, according to Sean Clark, an associate professor in the agriculture and natural resources department.
Transitioning to organic certification is a process that requires inspections and record keeping. “It’s a lot like doing income taxes,” Clark said. “We do it for the educational process, and because it makes you plan and be a better manager, thinking ahead, and anticipating potential problems.”