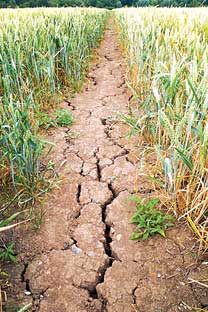 Now more than ever, it’s a good time to think about the future of water in Appalachia and the Southeast. Experts warn that we will have to face declining quality and quantity of water due to expanding population, changing climate, mountaintop removal mining and other issues.The solutions may prove to be elusive, but rational planning and conservation top the list.

Story by Bill Kovarik
When Mark Twain famously said “whiskey is for drinking; water is for fighting,” he was referring to the American West. Today, water is also for fighting back East, as drought cycles and increasing population lead to intense competition for the remaining supplies of water.

Meanwhile, paleo-climatologists believe that even without human-influenced climate change, the Southeast is looking at increasing long-term drought.

The drought of 2007-08 for example was considered the worst since recordkeeping began in 1895. More than one quarter of the region was covered by the National Weather Service “exceptional” category. The response involved voluntary and mandatory water conservation measures, but how effective they were is still not known.

Electric utilities – which use two out of every three gallons in the region – monitored water supplies closely to see if they would have to cut back production, as happened in France during the heat wave of 2003.

Conservation was mandatory in some states, like Virginia and Georgia, but had to be voluntary in some others , such as the Carolinas and Alabama, where state regulations have been proposed but not passed.

A more organized approach will be needed in the future, according to Bill Holman, director of state policy at Duke University’s Nicholas Institute for Environmental Policy Solutions.

“We’re in a transition to thinking about water as a scarce and valuable resource,” said Holman.

Whether that is possible or not remains to be seen. Holman and Richard Whisnant, a law professor at UNC Chapel Hill, authored a water allocation study last year that recommended a permit system for water withdrawls that would at least be similar to other states.

Many businesses are planning ahead for water resource risks, Holman said, so there are economic as well as environmental reasons for better science, better coordination of conservation efforts, and more centralized regulations.

Elliot Metzger, a policy analyst with World Resources Institute, said that the East would have to learn to be more like the West when it came to water policy. “The real focus in western states is on efficiency, on making sure that risk is mitigated with basic policy,” Metzger said. “They are a little more holisitic with planning, getting water regulators talking with energy regulators.”

The energy sector “adds immense stress to river systems during the warm months,” a recent report by the Southern Environmental Law Center said.

The center, which is involved in several lawsuits related to water useage, advocates greater planning and protection for aquatic species.

“We’ve urged states to take serious steps to do water planning on a watershed scale, ensuring flow, quality, and habitat,” said Cat McCue of SCLC. “We need to get a grip on land-use patterns that exacerbate these water resource issues, and NOT get distracted by chasing down big, expensive, engineered fixes like dams and pipelines that are short-term and cause more eco-problems down the road.”

www.wri.org/stories/2009/05/water-watts-southeast — World Resources Institute – Water for Watts in the Southeast.

www.southernenvironment.org — Keeps track of water resource lawsuits and issues. The report “Drought in the South: Planning for a Water-Wise Future” makes state drought and policy comparisons.