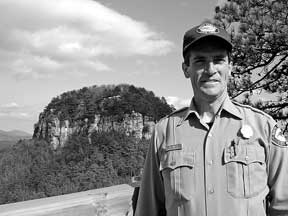 Ask any fan of “The Andy Griffith Show” what mountain they remember hearing about most, and they’ll say Mount Pilot.

Why, Andy Taylor and Barney Fife talked about going to Mount Pilot practically all the time. But where is it?

Well, if we assume that Andy Griffith’s hometown of Mount Airy, N.C., is actually “Mayberry,” and that its businesses such as the real-life Snappy Lunch served as inspiration for TV scripts, then maybe we can also assume that a nearby peak – Pilot Mountain – was the source of similar inspiration for TV’s Mount Pilot.

What’s more, it makes a good marketing hook. Businesses in the nearby town of Pilot Mountain use such names as Aunt Bea’s, Mount Pilot Soda Fountain and Mayberry Shazzam! Go-Karts and Games. Yet other town landmarks include Dr. Flippin’s Bed & Breakfast, housed in an 1896 mansion overlooking Pilot Mountain’s Main Street. Here, owners Charlotte and Gary York cater to visitors wanting to explore the wine country of the Yadkin Valley – or simply rest after hiking the highlands of Pilot Mountain State Park.

Centuries ago, when the Saura Indians inhabited this area, they called Pilot Mountain such names as “Jomeokee,” “The Pilot” or “Great Guide.”

It was saved in the 1960s thanks to the Pilot Mountain Preservation and Park Committee, which had proposed turning the place into a park in order to protect it and the surrounding area from further commercial development. Over the years, several acres have been added, ultimately bringing the total protected acreage to more than 3,500.

Now this park not only protects a natural landmark, it doubles as a monument to show what people can do when they work together to save a place they love.

Windsor considers Pilot Mountain among the most recognizable landmarks of North Carolina. Though only having an elevation of 2,420 feet, Pilot Mountain rises about 1,400 feet above the rolling countryside of the Piedmont plateau.

Like the rocky escarpments of nearby Hanging Rock State Park, Pilot Mountain is a remnant of the ancient Sauratown Mountains. Specifically, it’s a quartzite monadnock – a rugged mountain rock that has survived millions of years while everything else around it has withered away.

The Sauratown Mountains are, by far, not the easternmost peaks of North Carolina. Over 150 miles due east you run into Medoc Mountain State Park in Halifax County. At 325 feet above sea level, Merdoc is hardly what you call a mountain, but it is the core of what was once a mighty range of mountains east of Raleigh.

Pilot Mountain, located in both Surry and Yadkin counties, consists of two prominent pinnacles. The one you can see from so many other surrounding peaks – the “Big Pinnacle” – is connected to the “Little Pinnacle” by a narrow saddle.

Trails at Pilot Mountain State Park range from the five-mile-long stroll of the Yadkin Islands, along the Yadkin River, to the two-mile Grindstone Trail, ranked as moderate to strenuous.

Practically anyone could skip and hop among the park’s scruffy pitch pines to reach the Little Pinnacle Overlook: You simply follow an easy trail measuring barely one-tenth of a mile. This short trek gives you a classic view of Pilot Mountain plus Hanging Rock State Park, deep in the distance, looking east.

Another easy outing, starting at the main parking lot of the park’s mountain section, is the half-mile-long Sassafras Trail.

Still, the big must-see must be the Big Pinnacle. This can be reached by the nearly mile-long Jomeokee Trail, which wraps itself in a circle around the base of the actual peak still commonly called The Pilot. On this moderate path, hikers can get an up-close view of the sheer cliffs of Pilot Mountain.

Or you could just relax and sit a spell on a boulder bluff, studying the bark of a pine tree.

One caveat: Climbing on the Big Pinnacle is not allowed.