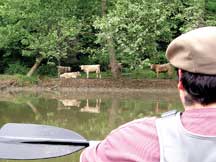 Non-point source pollution from agricultural runoff presents a major problem along many Appalachian rivers, but is an issue that can be fixed with farm conservation measures. Photo by Bill Kovarik

We started talking last year about a complete trip down the New, from Watauga County, N.C., all the way to the confluence in West Virginia, to celebrate the river’s 10 years with the American Heritage designation.

At times we feared we’d bit off more than we could chew; the logistics are daunting for such a trip and in these economic times, all non-profits are keeping a close eye on expenses and bottom lines. But the river called and volunteers came and our members and supporters encouraged us .

We launched just outside Boone, N.C., where the river is narrow but spectacular. Volunteer Tony Patchett , board president Henry Doss, Chris Rasmussen, and others joined us.

During the first week, in Watauga and Ashe counties, we passed many of our restoration projects. Over the last few years we’ve planted or restored more than 69 miles of New River and tributary banks, creating riparian buffers and correcting erosion problems. Overdevelopment, the result of poor or non-existent land planning, is the New River’s greatest threat these days.

Further along, we passed sections of the river where very large new homes are being built, often in posh developments (in spite of the housing downturn). The pressure is only increasing as available land appropriate for development disappears and land which would normally remain vacant becomes valuable as riverfront property.

This is especially true in areas of what could be called “suburbia;” on golf courses like the one on the outskirts of Radford in Virginia, or along the shores of Claytor Lake. Where homes are close to the river banks, or where the banks are mowed to the edge, a great deal of erosion can be observed.

If only property owners understood that grooming the banks of their property is a guarantee they’ll be sending their own land downstream. The runoff carries nutrients from fertilizers and other pollution—elements which healthy riparian buffers naturally filter. The river was often muddy when hard rains preceded us, especially in areas of Ashe County, N.C..

There are also places on the river that have been traditionally used as dumps – particularly for tires. The efforts of NCNR Clean Ups in North Carolina and excellent and very active groups like ReNew the New in Giles County, Va., are helping to improve the trash situation overall.

As we ventured from North Carolina into the heart of Virginia, farms along the New shifted from Christmas trees to cattle. A little further long, Ronnie Powers, president of the Friends of Claytor Lake, took the expedition crew out on his pontoon boat. He and volunteers run a sophisticated cleanup operation complete with a retired U.S. Navy vessel and heavy conveyor equipment to move tons of trash from Claytor Lake. Like the rest of the New River, Claytor Lake’s biggest problem is the ever-present development pressure.

The Expedition also floated the river in the Radford Army Arsenal section with Lt. Col. Andy Munera and son Justin. The Arsenal’s contribution to the pollution of the New River is a major concern for NCNR, as it is for officials at the Arsenal. Our float emphasized the importance of continuing dialogue.

As we put in one morning, local fisherman said Claytor Lake dam had released water during the night; they thought the water was up a full foot and a half. With so many rapids due for the day, we hoped the novices in our group would spend less time swimming and more time paddling as we continued our expedition.