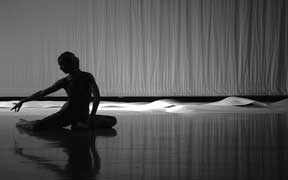 Dancers cling to each other and spread their hands in the air, like trees on an Appalachian mountainside. Then, explosions rock the stage, and erupt on a screen in the background. The dancers collapse, and, in a while — after a slow, sad dance of grief — a grinning man in a bowler hat, smoking a cigar and grasping at fistfuls of money, is wheel-barrowed across the stage.

It’s one of most heart-wrenching moments, followed by one of the funniest insights, to be enjoyed in a multimedia dance performance called “Eating Appalachia: Selling Out to the Hungry Ghost” that premiered this May at Radford University.

The 45-minute modern dance performance premiered in May and will be going on tour in the fall of 2009.

“I feel that the humor is important; it frees us up,” says McLaughlin. “I didn’t want it to be depressing, because I feel that the media does depress us, as a culture, and I think that’s part of the problem.”

The problem of technology and greed is at the heart of mountaintop removal mining, McLaughlin says, and it is a major theme in the dance. At one point, dancers are caught in a web of electronics and cables. At another point, dancer Whitney Isaacs wanders around the stage, screeching with greed: “That. I’ve always wanted that. It’s perfect. And that … ” But, like a hungry ghost, the dancer can never be satisfied.

“We can point the finger and blame the coal companies, but I finally realized I’m part of the problem with my own over-consumption,” she said. “There’s a place for technology but for whatever reason our society just tends to overdo things. We’re just so used to luxury.”

McLaughlin’s depictions of nature are also inspiring. The dance performance opens in a deep blue light with dancers tumbling along a rippling cloth, depicting a tumbling brook, embodying the beauty of free water.

“I was thinking about water as source of life, and that’s one of the big issues with mountaintop removal is that we’re killing the springs and the creeks and the rivers,” she said.

Another part of the dance was intended to honor the region’s history, McLaughlin said. At one point, as an old coal mining song plays in the background, the dancers are in rocking chairs, holding still, almost holding their breath.

“I was trying to imagine what women would feel like when their sons or husbands would go off to work in the mines, and how frightening that would be,” she said. 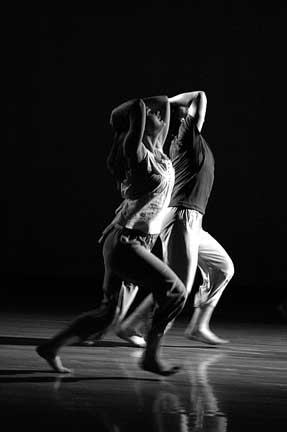 The idea for the dance performance about mountaintop removal mining emerged in the fall of 2008, in conversations with others who had been engaged in the environmental struggle. And yet, McLaughlin’s Appalachian childhood – she grew up near Louisville, Ky. – had already sparked a lifelong interest in the region.

Her first choreographic work, performed in the 1970s, was about women who stood up for the unions and against the coal companies.

“There was something there that touched my heart,” she said.

McLaughlin is an assistant professor of dance at Radford, and her background also includes professional credentials as the artistic director of the Movement Society in New York, performing with the Cincinnati Ballet with Lee Nagrin, and as a student with Cecile Heller of the Paris Opera Ballet.

Arts make an important contribution and add new dimensions to the social and political process, she insists.

“People who are in the arts think outside of the box, and that’s what we need, in order to figure out new ways to do things,” McLaughlin said.

“I think this economic crisis is going to be a blessing if we allow ourselves to learn from it,” she said. “Maybe we don’t need all this stuff. That’s not what is going to make us happy.”

Appalachian musicians Bud Bennett and Don Hall worked with McLaughlin on the piece. Readings describing the impacts of mountaintop removal by Theresa Burriss were also part of the performance. Paintings by artist Suzanne Stryk, projected against the backdrop, helped illustrate some of the themes of hope, life, history and the joyful renewal of life in the mountains.

At one point, as the dancers talked about their connections to Appalachia, McLaughlin realized that Juliana Utz was the great-great granddaughter of Peter Urban, the only survivor of the great Monongah mine disaster of 1907. “This is destiny,” McLaughlin said.

“People end up feeling hopeless and helpless… and just go out and shop,” said McLaughlin. “We entertain ourselves to death.”

“So I was trying to figure out how to do a piece that would be compelling and provide some hope,” she said.